A care package from space, and the week’s projects. 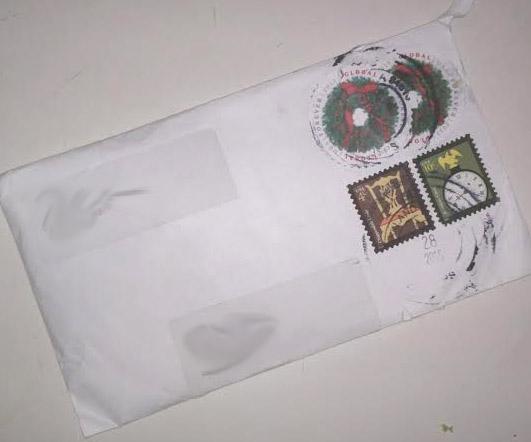 I am a bit of a ditz. I accept this and embrace it. I also have a bad habit of ordering things on Kickstarter and forgetting about them—and the “surprise, it’s Kickstarter Christmas!” is a part of the lifestyle. And then I got this in the mail.
“What is it,” I thought? The layers of stamps, California address, and the general “I can’t tell if this was sent from a friend or from fairies” look to the envelope made me immediately get my partner and housemate for an opening experience.

A few weeks ago I’d been listening to an NPR article about a company—the Mysterious Package Company—which had gotten a recent very successful start through Kickstarter. Their product was stories.

As a marketer and a storyteller—and as a human being (well, sort of)—the idea was compelling. A company that makes narratives that people want to buy into! Buy someone the gift of an experience! And I do have a few friends that are as much into this sort of thing as I would wish to be. Maybe someone got me one?

Or maybe I’d just forgotten about another Kickstarter.

So…I opened it.It got even weirder,

I had no idea what the hell I’d gotten. 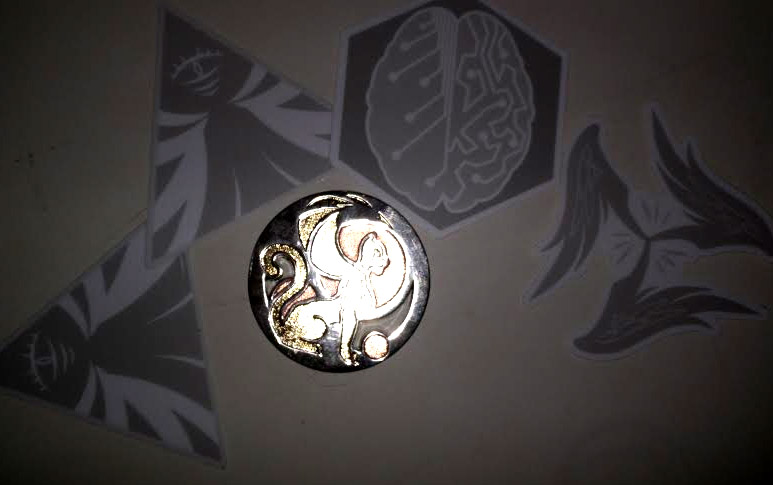 Wow, that’s a terrible photo! But hopefully you can see the weirdness–stickers that look very much like mysterious bumper stickers from the Bavarian Illuminati’s rock band, and a mysterious golden disc with a big-breasted sphinx–quite heavy for its size–with the mysterious text on the side:

MARSCO30018 CIV. TOGGLE. IF FOUND, DESTROY. DATA WILL BE TRANSFERRED TO OWNER’S REPLACEMENT.

We pondered this for a while. There was no obvious input device for a big-breasted sphinx (really, the mind boggles). Putting it to our foreheads didn’t help. The code number wasn’t terribly useful. Banging it against a rock and then throwing it in the air so that it turned into a satellite? No (and it’s been done.)

As it turns out, I’d completely forgotten that the nice people behind HC SVNT DRACONES had sent me a bundle of swag as a backer reward, but…LABELS, people :)

On the other hand, it’s rare that you get a care package from space aliens. So, no regrets :)

Reviews this “week”: We are having a run of 1930s retro lately! Check out Ironclaw publisher Sanguine Games’ new fur-noir project, “Urban Jungles,” and fight sky pirates with a wrench and RAW GUMPTION in Wild Skies!

Project Manimals (Ends: 10/29/2015)
An art project and cause, very realistic commissions to buy the artisst’s mother a kidney. Remarkable artwork!
I’m not a fan generally of using Indiegogo to farm commissions, but this one is unusually nice AND unusually successful, almost $3000 raised.

Otter Twin Magic (Ends: 10/27/2015)
For children. And otters. A talking-animal book about otters. This blurb is going in circles…

Boots and Cats (Ends: 10/31/2015)
A Child’s Garden of Beat-Boxing, two kittens dance and bass their way through a primer for kiddies who want to make MORE noise. But more interesting noise :)
THIS IS SO CUTE

Graphic novel of the Lloyd & the Bear comic series, with lots of extras.
Cheerful and minimalist art, kind of reminds me of the world of Designer Toys.

Torchlight Lullaby (Ends: 11/11/2015)
Kids/tweenies graphic novel featuring anthro koalas, a raven/kenku, and one of the cuter foxes of Kickstarter 2015
Oklay, some shots of the fox are cute, others are rough. It’s a little bit Indie Comic and your mileage may vary.

Urban Jungle (Ends: 11/8/2015)
A fur-noir tabletop RPG of gansters, flappers, swindlers, and hard-luck cases from the makers of Ironclaw.

Le Chat Rouge (Ends: 11/9/2015)
Mardi Gras/Italian Renaissance style royalty on these elegant cards, but the jester is a very pretty anthro cat, well worth a look just for those two cards.

That, My Lad, was a dragon! (Ends: 11/11/2015): Beautifuly done, semi-anthropomorphic dragon miniature, detailed and nicely muscled.
Mental Illnes Plushies (Ends: 11/14/2015): This is a quirky project–stuffed and strange versions of mental illnesses, one part thoughtful, one part silly.
My 8Bit Story (Ends: 11/30/2015): Graphic novel–a child world-hops through the worlds of her game boy. +1 Megaman, Pokemon, would read again!