This week’s illustration is from Hiorou’s  webcomic, Eorah, now on Indiegogo.

Good grief, it’s been an interesting week for furry-inspired tabletop RPGs, with two compelling projects–the first, Ultimum, is more interesting for what it threatens to do to the RPG industry (I really don’t know enough about the game’s story to get a read on it), and the fascinatingly weird and surreal post-apocalypse game, Genestorm. And I can absolutely rabbit on about TRPGs for hours, so…I won’t. Maybe later.

Instead I want to talk about two semi-relevant projects that are kind of neat. The first because of its crazy high pledge level, the second because, well, it’s an anthology comic that’s welcomed some furries into its fold, and that’s pretty neat. 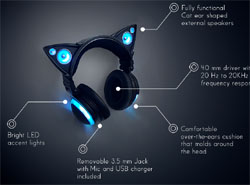 Let’s start with those ears.

This is a fur-friendly accessory–headphones with outward-facing speakers (neat, probably a little tinny, but neat), LEDs in a range of colors, and kitty-cat stylings. And they have made…can you believe it? over $1 million in pledges. I can’t believe it. I’m frankly agog. There’s been other neko-themed headphones, but this one’s really taken off. The ravey lights are probably a factor, and the unusual outward-facing speakers, too–it’s kind of a neat “everything” project, well worth a look. I’m pretty sure I’ll be seeing the Axent Wear Cat Ear headphones at Texas Furry Fiesta, I’ll be looking for them.

This is a neat “furry gone mainstream” project, and I’m excited to see it. Okay, kitty ears aren’t really furry, are they? More anime? Maybe, that’s probably where they started, but the energy of the kitty cat ear may be one of the things that’s pulled our little fandom into the mainstream. Cat ears broke the ice. Next, kangaroo tails. Mark my word.

Anyway, playful, friendly, and furry-inclusive without being furry-specific. I look forward to seeing this project in print.

Reviews this week: I’m apparently a sucker for historical comics. This week is the 1929 historical/humor webcomic, Rudek and the Bear.

The Golden Week (Patreon ongoing funding)
Furry slice of life webcomic, available in *so* many languages
So really, I’m just in love with his lion character.

Axent Wear Cat Earphones (Ends: 11/7/2014)
Cute kitty headphones with little external speakers and glow effects, in a rangeo f colors.
Can I just say, $1,159,000? Really? Wow. This is not the first cat-ear headphone project I’ve seen, but it’s the most wildly successful.

The Last Remaining Ocelots (Ends: 11/15/2014)
Documentary about the two remaining populations of ocelots in Texas

Genestorm (Ends: 11/15/2014)
A surreal post-apocalypse tabletop RPG with GORGEOUS B&W art by Dirtiran
Ohmigosh, the artwork here is strange and evocative. Wow. By the designer of the ‘Albedo’ RPG.

Ultimum (Ends: 12/13/2014)
Tabletop scifi/fantasy RPG with rich and seamless RPG support, humanity returns to earth after long millenia of absense.
Most of the kickstarter project page focuses on the tech side, I’m a little unsure of the setting. There’s a bit more on their website, though.

The Land of Eyas (Ends: 10/29/2014)
A charming puzzle/platform video game, a little Binding of Isaac and a little Where The Wild Things Are.