It’s important to give kids the vital foxes they need for a strong, healthy future. Pediatricians–at least the reputable ones–recommend 3-6 foxes every day for children between the ages of 4 and 6. Give them a head start on life with these projects.

Once upon a time, there was a happy couple, a magazine editor and a computer programmer,  who had a child. And they cared for that child very much, and like every parent, wanted their child to have a firm grasp of the fundamentals of object-oriented programming. 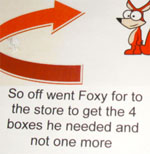 So the VYP Project was born. This is a hands-on book that, through repetition and problem-solving, communicates some basic programming ideas to children (target audience, ages 4-6). The story is simple: The title character, Foxy for, has a job  to do: he needs to go to the store to get a stack of boxes–four of them, no more, no less. But he can only carry one at a time, so he loops back to the store until he’s completed his epic quest.

Along the way, he presumably counts up to four, but the book describes his quest first with narration, then the coding that his trip represents, with values set to variables, loops, if statements, greater thans, and all the important things in life. There’s also manipulative pieces, blocks and things to move around, an interactive element that helps kids get deeper into the process.

The text has a sing-song, rhyming quality that emphasizes the repetition of the process (I’m a sucker for internal rhymes, so, yay.) The art’s cute, though it looks like they only have a single fox graphic at present. Maybe that’s not super-important, but we could wish for more than. Unfortunately, I think the goal is a little high for a book project–$50,000 seems somewhat unreachable. Educational projects can be expensive, what with the small print runs and fiddly little attached bits, but the Kickstarter economy may not bless a new project with that kind of funding.  Anyway, visit the project, I don’t want to spoil the if(trip<=4){end.

“Foxotic? There’s no such place.  Mr. Wonka, I am a teacher of geography.”

“Oh, well, you’d know all about it. What a place it is. Nothing but foxes.”

Victim of a drive-by waterballooning

Foxotic is very much in the children’s puzzler-exploration-decoration genre, a MMORPG with a huge range of stores to visit and things to buy, puzzles to do and an unreasonably bright color scheme. However, and here’s the big however, it’s entirely populated by foxes. There is no reason for this, except that foxes are pretty damned cute. As I understand things, a meteor struck the earth in the middle of the Pacific ocean. After many thousands of years, a fox-filled tropical island–probably slightly whiffy–was the result.

So, for the record, foxes come from space.

The game, which is currently in beta, isn’t for everyone. But it is fun to glance over, maybe watch the trailer for, and it’s got some good stuff going for it. The characters are cartoony and goofy, but occasionally rise up from the depths of flash animation to be warm and appealing. It’s got some educational aspects–some of the games and missions have learning elements and cooperative aspects, though from the look and the trailer, it averages out to be a fun, kid-friendly hangout, with silly little games and things to purchase with the gold you win (I suspect King Lucky of Foxotic Land has opted out of pure capitalism for a government-subsidized sidequest-based economy.) Not that there’s anything wrong with “cute child-friendly hangout” as a goal. So rating: three stars, but something over a thousand foxes.

A Breed Apart Clothing Co. (Clothing/Costumes. Ends: 11/15/2013)
Obnoxious “breed pride” shirts for the dog-lover or possibly dog in your life.

Radio Brony Minicon (Events. Ends: 11/13/2013)
Bronycon launching in Paris, with a “theatrical release” of MLP4e1 and Fighting is Magic tourney. (It’s good to know there are silly people in Paris, too.)

March of the Art Dolls (Toys. Ends: 11/7/2013)
Wolly and unique velociraptor art dolls (Kickstarter relaunch of a previous project. Isn’t it usually the other way around?))

Protect Siberian Tigers (…Causes. Ends: 11/16/2013)
Campaign to protect, house, and feed a sanctuary of Fussian Siberian Tigers, and establish a breeding program. Good photos! Pledge points are kind of lackluster, but it’s for the tigers.

Dragon Dolls (…Coming Soon?. Not yet launched)
Tiny dragon ball joint dolls from Bladespark (as seen on the 9/8/13 post)

Play AR (…Just For Fun. Ends: 12/14/2013)
Augmented reality video gaming, with easily-programmed games for the global community. The “play as your avatar” feature needs some work, but might be the beginning of a good thing.