This week’s illustration is from “Samudai” fighting cats video game, now on Kickstarter.

One of the recent serious furry video game success stories, Armello, posted this to their followers on the twitters: a Kickstarter blog post called “A Year of Games from Down Under.” The gist of the article is, “It’s been one year since Kickstarter went live in Australia/NZ, here’s some games we love from the southern hemisphere.”

It’s a good little article, not a lot of deep coverage but fun to see the range of successful projects–and it leads with Armello, and not because Armello starts with “A” (though it does, I have a degree in this sort of thing. Also, the London Underground is not a political movement.)  There’s a few other fur-friendly treasures there–Paradigm and its mutant sloth, angry bears, wererats–it’s a mixed bag. But it’s nice to know we’re solidly planted deep in the fantasy gaming genre.

I don’t know where I’m going with this, no-where in particular, but it’s good to know we’re not the furry ghetto we might have been in the distant past.

Reviews this week: Laughing with Mormons in “The Furry Experience”

PS: Did you know that sometimes when you skip a week, 4,000 projects get posted? Still true.

Life Size Pokemon (Ends: 12/5/2014)
I love Kickstarters for free stuff! This one is for a give-away of free life-sized pokemon art. Cute stuff.

Steadfast Kid’s Clothing (Ends: 12/5/2014)
Well, kid’s clothing and adult sizes too–tattoo art style animals, with some seriously cute tigers and owls.
I do like this clothing line, but doesn’t look like there’s much of a chance of it making goal. 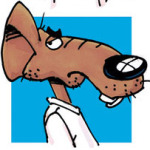 Gold Digger: Gold Brick 5 (Ends: 12/12/2014)
Collected issues 101-125 of the Gold Digger comic series, from Antarctic Press, one of the granddaddies of anthro comics
I have a lot of love for Antarctic Press, most of their furry titles moved across the street to Radio Comics, but AP was one of the first groups to take a chance on the furry fandom.

The Furry Experience (Ongoing funding)
Patreon campaign for Ellen Natalie and her webcomic, a slice-of-life set in, of all places, Salt Lake City.

RealAnimals Supreme Court Arguments (Ends: 12/7/2014)
Somewhere between ‘The Muppet Show’ and ‘The Washington Post.’ Canine re-enactments of supreme court hearings by dogs, #realanimalsfakepaws.
Yeah, so this isn’t the project poster’s creation, it’s an ongoing meme, being crowdsourced (?) by John Oliver.

Dogs At War: A Documentary (Ends: 1/8/2015)
A documentary about military service dogs, told through the dogs’ eyes

Cleadonia (Ends: 12/10/2014)
Furry tabletop fantasy RPG.
So many furry tabletop RPGs out right now! The illos for this one are more quirky than artsy, I don’t see that carrying into a product with a market, myself.

The Underground: Sam and Fuzzy RPG (Ends: 12/12/2014)
Sam and Fuzzy: Paranormal Detectives. An RPG based on the wacky webcomic.

Age of Aleria (Ends: 12/5/2014)
Pet breeding and raising game with a vast equine assortment to chose from, and dragons to hunt.

Legendary Battlegrounds (Ends: 12/5/2014)
A cute ‘once upon a time’ video game with an amusingly cumbersome Big Bad Wolf. No chance of it making goal, but fun.

Dragon Dating Simulator (Ends: 12/17/2014)
Sooo. I don’t know if this “Dragon Dating Sim” is a joke or not. I really can’t tell. This is what too much Indiegogo does to your brain. Someone else be the judge.

Inkster (Ends: 12/13/2014)
Development funding for the online art portfolio site Inkster
This is a lot of what Flickr used to be for me, an online art gallery/portfolio. Nice look and feel.

Eddie Earthdude (Ends: 12/6/2014): Oh. Oh dear. The artwork on this is astonishingly bad. Apocalyptically bad. It’s ‘Captain Planet’ meets the absolute worst furry artwork you can imagine.
Anubis PC Gaming System (Ends: 12/13/2014): Guys…guys guys guys…a PC case that looks like Anubis is really just kind of silly. Sorry to break it to you.
Furry4Life 2014 (Ongoing funding): It’s not that I don’t like Furry4Life, it’s a decent social network, it’s just that this crowdfunding page doesn’t tell anything tangible about the product, doesn’t really call anyone to act, or make any actionable promises. Don’t be this page.

ChipCodes (Ends: 12/25/2014): Cartridge modifications to turn your Gameboy into an 8bit synthesizer with a fun guitar or xylophone case