Illustration from Paradoxia: Homebound on Kickstarter

Whew! Back from Texas Furry Fiesta 2015, and recovered from the creeping con crud! Met a lot of the artists on the African Sojourn trip, and learned that Dark Natasha is planning a graphic novel kickstarter of her own soon–at least I believe it’s a graphic novel, I was a little bit sleep-deprived at the time.

My own “Crowdfunding for Furries” panel fell a little flat, since I was back-to-back with a Guest of Honor who was running his own kickstarter panel, most of the audience picked up and left when he was finished speaking. Oh well, these things happen! We had a lot of the same points to cover–though he was mostly focused on production and I was mostly focused on message. Can’t blame anybody who didn’t want to sit down for three hours of crowdfunding.

One of the questions that came up was a way to monetize a subscription product through any of the existing crowdfunding platforms–that is, “what platform can I use to subscribe to my magazine?” Neither one of us had an answer, but the “good” “people” at “FAPP (NSFW!)” have an answer that is so screamingly obvious I’m kicking myself for missing it.

Patreon allows artists to fund on a “per week” or “per month” basis, which is how most people tend to use the platform. They also allow funding on a per-item basis–that is, per song, per painting…or per book.

For little stuff like a single youtube video, per-item funding makes me nervous. But if a writer plans to release a book every six months, well, if it comes out in five months or seven months, no big deal. So the next volume of the FAPP porntastic RPG, and every volume going forward, can be purchased digitally through Patreon. Brilliant solution!

Reviews this week: The patreon campaign for bright and cheerfully in-your-face comic Taco El Gato, animated adventure with Nine Lives of Claw, and not so much a review as an article covering crowdfunding for pornographic projects,

RoboTales (Ends: 3/19/2015)
Children’s chapter book series. A very well-illustrated robot dog in another solar system looks for the mystery of his creation.
I wish I knew how illustration-heavy this series was going to be, that’s always a problem with YA stuff. 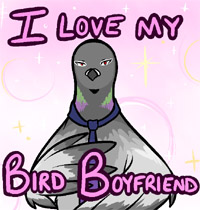 Broken Birds: Hatoful Boyfriend Fan Comic (Ends: 3/13/2015)
Comic based on stylized pigeon dating sim, with varying levels of anthro pigeons. Art by Playerprophet.
There is much in this universe that I do not understand.

M.R.S. Monster Café (Ends: 3/21/2015)
Webcomic, patchwork anthro monsters find their place in society through their café. Brightly colored madness by Shazuku and Jei.
Anybody got a reference for Jei? More art on Facebook.

The Aggregate (Ends: 3/31/2015)
A “Choose your own adventure” graphic novel. I’m including it purely because of GIANT CAT SPIDERS.

Desert Mirage (Ends: 3/16/2015)
A live-action/animation hybrid, sort of a low-budget Roger Rabbit, featuring a vengeful racoon and an out-of-work janitor.
The art on this one is a little bit ‘not ready for FurAffinity.’ Project doesn’t seem super-fundible at this point.

The Nine Lives of Claw (Ends: 3/30/2015)
A cybernetic cat, a mouse, they fight crime, usually in the form of malicious anthro dogs. Animated action.

Aggressive Lucario Mascot (Ends: 4/3/2015)
Sketch comedy: A Lucario fursuit mascot assaults the guests of an amusement part.
I’m tempted to fund this just to see what a $300 Lucario costume would look like.

Hera and Sooky (Ends: 3/30/2015)
A side-scrolly platformer with a lot of gear-gathering featuring two cute cartoony non-anthro dogs and their grappling, leaping, boating adventures.
Sort of like “Megaman” meets “The Incredible Journey.”

Icicle on his Bicycle: The Misunderstood Husky (Ends: 3/16/2015): Children’s book, a little husky boy on a journey through the woods on his bicycle. Sometimes dreams exceed artistic ability, trippy colors though. Also, count the adjectives.

Studio Cosplay (Ends: 3/15/2015): A makerspace specifically for costuming and cosplay, opening in the Washington DC area.