This week’s illustration is from comic book project “AdSventures,” now on Kickstarter

Okay, I should probably apologize for the lack of content and updates for the last month. IRL got kind of difficult for me after I received one of those unfortunate “forever” vacations, and for some reason a few hours of precious after-work free time is more valuable than days of unemployment. So for slacking on useful content and my self-appointed duty to sing the praises of four out of five furry kickstarters, my sincere apologies. On the plus side, there haven’t been many earth-shaking and on-topic projects, although I should probably give Paws of Nepal  some kind of callout, it is excessively cute.

Though there have been a lot of projects. 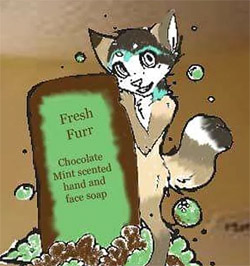 So right this moment I’m going to focus on one really bad one, because it’s a useful object lesson. Have a look at Fresh Furr.

Top to bottom, this page is challenged, there is nothing that is right about it. I’ll give the product itself–scented hand soap with a furry theme–some benefit of the doubt, you can slap an anthro critter on any old thing and call it branded. The biggest problems with this page are, in my opinion, about trust.

In the fandom, we usually have a thin veil of anonymity. Most of us, I think, would prefer to let people know we’re a furry on a case-by-case basis, vetting people to see if they’re friendly. Even so, most furry artists launching kickstarters tend to use their real names rather than made-up ones. It’s hard to raise money behind a mask. Inside the fandom, our altonyms can be quite real (anybody else get weirded out when someone–even your mate–calls you by your real name at a furmeet?)  But unless your goal is low or you’re very well-known in the fandom, you’re going to have an easier time raising money as Elizabeth Valdez than Spots Wigglecat.

So…how much trust is there for a fundraiser who uses neither his real name nor his furry identity? It’s like an anonymous voice asking for money on the other side of a restroom stall.

This is not a good comparison. I’ll try again later.

I can’t really criticize the business plan because there quite literally isn’t one, there’s actually an anti-plan. I can’t imagine anyone paying $50 for soap, but even if he sold every one of the 25 units in his backer reward, the creator couldn’t make goal (25x$50=$1250, campaign goal of $2500…) So the math is challenged. But far worse than that, there’s a deliberate obstacle to understanding the rewards themselves.

Pledge now for the charity soap raffle! Will you be lucky or worthy enough to win soap? Not all who pledge will receive soap. We have measured out three precious thimblefulls of soap–not enough to use, but surely enough to experience the pleasure that is soap. Tell your friends. Tell them of soap.

And then to use the words give and sample after this? Oh, seriously. This is not an act of generosity. You’re exchanging $50 for the promise of soap. Objectively, this is a high price for any personal care product, and your backers should be told exactly what they can expect. Nobody wants to guess what they’re paying for. And, technically, if I donated $50 to the cause, the creator could give samples to, say, visitors at a table at FurSquared, not to me, and still be compliant with the text of this reward.

Putting aside the criticism of the Kickstarter page, it’s not a bad product. A quick search through FA will give you a good look at the list of soaps and scents and a bit more information about the product itself–information that really should have been included on the Kickstarter page. The actual product concept is soft soap scented with essential oil blends and then decorated with your fursona, for perhaps $18.00–and you know, I’d consider having Corbeau’s snarky face on a bottle of coffee-scented soap, or possibly a personally-branded bottle of skin lotion (you cannot even imagine how high a gay hairless dog’s moisturizing budget can be, trust me.) $18 isn’t a bad price for a custom soap bottle, it’s about on par with a badge, and you can always refill it, the whole deal even comes with a refill and, I love this, seriously I do, instructions for making more custom soap. That’s a really solid and generous idea.

But unfortunately, none of this material made it to the Kickstarter page. Just vague promises, hidden identities, and overpriced soap.

So, the take-away here: remember your basic Journalism questions. Who, What, When, Where, Why, How (though not in that order.)

What: Describe your product in detail, particularly in regards to the parts that people are spending money on.
Why: Sell your product by explaining the need. (True fact: before selling mouthwash, Listerine had to sell the idea of bad breath. “Listerine did not make mouthwash as much as it made halitosis.”) (wiki)
Who: Build credibility by letting people know who you are (not in the first paragraph, though.)
How: What are you using your funding for? How will you create and deliver the product?
When: Let people know your timetable for delivery (and how you derived it.)
Where: Okay, I got nothing for Where, but it’s probably tied to “who” somehow…

Review this “week,” a look at Furries: A Documentary.

Aaand, then new projects. Since I haven’t updated in almost a month, there’s more than a few. The complete list is up on our Projects Page!

Brony Adventures Coloring Book (Ends: 5/13/2015)
32 pages of colorable ponies and pony monsters from Lorraine Schelter.
The nice thing about a pony coloring book is you get to use *all* the crayons.

Life is a Carousel (Ends: 5/24/2015)
Artbook of colorful centaur ladies with a merry-go-round circus aesthetic and so very many bows.

The Naiad Chronicles (Ends: 5/31/2015)
Elves, dragons, cats, possibly a cat boy, Miyazakiesque dragonwolves, and some cute plushies. The novel.
I’m not perfectly sure what’s going on here, it looks a bit complex, but it’s a cute project page.

Stanley Streak and Milton Mellow: Patently Opposite Fellows (Ends: 5/20/2015)
A children’s book reframing of the Tortoise and the Hare as two old friends, both with their own strengths.
Nicely illustrated, though the rhyme words are a touch esoteric and jarring in a natural-language flow.

The Heroics of a Sheep Dog (Ends: 5/22/2015)
An adventurous black sheep and a noble-ish sheepdog on a journey of identity

Square Zair Pair (Ends: 6/10/2015)
A Dr. Seussian rhyming story of diversity in couples, a little GLBT story for kids, with charming art by Kikidoodle
To answer the two tricky questions of ‘Why does Toni have two moms?’ and ‘Why can’t furries ever just be animal-colored?’ :)

Eeveelution Charm Keychains (Ends: 5/28/2015)
The many faces of Eevee in a charm/keychain miniproject.

Floraverse: Seeds (Ends: 5/20/2015)
A mini-story from the The Floraverse, of a fairy bird using seeds to save a continent.
Very pretty and abstract art in this series, but not everybody’s thing.

Torsobear II (Ends: 6/1/2015)
Dark streets, dirty cotton stuffing, and toy-on-toy noir in a city that never sleeps (with its blankie). A comic anthology with a wide range of art styles.

AdSventures: The Climb (Ends: 6/2/2015)
Children’s comic book, a bear climbs a mountain and finds something evil at the top. Clean, minimal, and abstract art.

Pissed-Off Panda (Ends: 7/7/2015)
The sullen and surley adventures of an ‘Adult Swim’ style panda and his big-eyed pig friend.
One of my friends suggested that this is trying too hard to be awesome. I’m not seeing it, like a lot of Kickstarters it’s big and loud and the lead character’s your typical abstractly-drawn ass.

Furries: A Documentary (Ends: 5/17/2015)
A fur-friendly documentary exploring the creative and identity-building sides of the community
I’m on the fence about this documentary. It’ll be a great tool for kids explaining the fandom to outsiders, but maybe a little too safe for mainstream entertainment.

Beef Sumo (Ends: 5/31/2015)
One bull in a mawashi, one bat in boxers, and a series of animated misadventures. Voices by Bender, Twilight Sparkle…
While being loosely inspired by Ren and Stimpy, this lacks much of the grace and charm of Ren and Stimpy, and I say that unironically. Some good jokes though.

Big Dog (Ends: 6/5/2015)
Short film built around the premise of ‘what if the government handled lycanthropy like it handles mental illness?’

Theme Planet (Ends: 6/8/2015)
Animated 10-minute short about a planet covered with roller coasters and dumpy anthros. An expansion of the 2003 short,
The Oculus Rift version of this film could potentially be a wild ride…

Paws of Nepal (Ends: 6/11/2015)
An animated short film about street dogs in Nepal. Very cute illustrations!
Toon53 Productions has a good six-year history of animated shorts, so this is probably safe money, even with Flexible Funding

Krita Upgrades (Ends: 6/3/2015)
An upgrade for Krita, the free paint program with a cute skunk mascot. 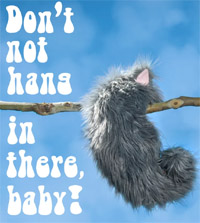 Not-A-Cat (Ends: 6/4/2015)
A strange bit of anti-marketing for ‘not-a-Cat,’ a sort of plush stuffed animaloid lumpthing with at least one ear.

Dot & Dash: Mystery of the Red Dot (Ends: 5/24/2015)
PC/Mobile game about one kitten’s quest to catch the Red Dot
A bit meme-y but with some cute concept art

The Tarot of Bones (Ends: 6/3/2015): A creepy and engaging tarot deck of found bones collages, by Lupa Greenwolf. Now with the Happy Squirrel :)

The Enchanting World of Rankin-Bass (Ends: 7/8/2015): A documentary about the makers of every darn Christmas special in the world (oh, and Thundercats!)

Fresh Furr (Ends: 6/8/2015): A minimal effort soft soap project with a loose furry theme. From the zombie mascot to the wierdly ambiguous rewards that make no promises, there is nothing good here.
Animal Tales and Bible Stories (Ends: 7/13/2015): Religious animation is always a solid 10 years behind the rest of the world. I think this is edging toward 20 though. Worst hedgehog ever. You’ve done a bad thing when you can’t get a single dollar in your cashbox.