This week’s illustration is from the Kickstarter campaign for the Sherlock-inspired anthro card deck, The Game Is On.

I have a theory that any project coming back for a second round of crowdfunding is just doomed to failure. In the year that I’ve been looking at kickstarters, all the “try-agains!” seem to tank. Even if the wallets of the crowd pledged $15K before, they’re not necessarily going to give you the $15K again, the energy isn’t necessarily there, and the sell isn’t as compelling.

That being said, there’s the smallest chance that Beast’s Fury will prove me wrong…kind of.  Their funding campaign was a success in the “let’s bring in some money” sense of the word success, but it landed a far cry from what was necessary to release the game itself. Now they’re pitching a second wave of funding, and have a good start with about 25% of their goal met in the first two days. Curious to see how they trend.

Reviews this weekcycle: The whimsical “Matlock the Hare,” a little wizard in green robes. I like it when I don’t have to tweak the balance and hue of a character to get him to fit my color palate. 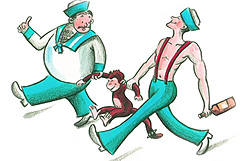 Bi-Curious George (Ends: 6/18/2014)
“One day George saw a man. He had on a sassy purple beret. And George got very excited, despite himself.”
Hmm…the video hypes the success of the book in its previous press run, but only two funders right this second :(

Matlock the Hare and the Tillian Wand (Ends: 6/24/2014)
Whimsical wizard rabbit–ah, hare–and his 500 (!) page YA illustrated adventure!
Wacky, wacky vocabulary throughout. I think making up ludicrous words is a British thing.

TMNT Banished (Ends: 7/4/2014)
A darker version of Teenage Mutant Ninja Turtles, with themes of violence and betrayal.
It doesn’t look like this one is going anywhere.

The Game is On! (Ends: 6/19/2014)
Anthro Sherlock Holmes inspired characters in a new art-card deck!
Otter Sherlock and Fox Mycroft for the win!

Keep Beast’s Fury Going! (Ends: 6/19/2014)
A return to crowdfunding for the Beast’s Fury anthro fighting game.
I’m amazed that it’s doing so well for round two! But Beast’s Fury has a good fan base for a game that hasn’t hit the shelves yet. Do games even hit shelves anymore?

Puppy Pride tails (Ends: 7/7/2014)
PuppyPride comes back with a range of somewhat suggestive tees, dogtags, and tails. A hint about the tails: they don’t attach to your belt. Just saying.

Global White Lion Protection Trust (Ends: 7/2/2014): Get involved with an effort to protect white lions. All lions, really, but focusing on the white lion.