This week’s illustration is from”Child of the Daystar,” fantasy/action novel now on Kickstarter

It’s another lazy summer day, and you know, I haven’t seen that much from furry crowdfundingland that really amazes me. I’m a little curious about “Furries: The Movie,” because it’s a surreal love story and I’m not sure it has anything to do with furries at all. But nothing is just jumping out at me. So I’m gonna take a moment to look at what’s new at IndieGogo: Campaigner Profile Cards.

One thing I like about Indiegogo is they emphasize creative teams. So if there was a tabletop role-playing game out there by Dicewolf, and I got to consult with her on the Indiegogo campaign, and all the art was by PencilPanda, somewhere near the bottom of the page, you could see all three of our mugshots. I like the sense of community—particularly good for IndieGogo, since they do a lot of work with nonprofits.

So, as of recently, all this information on the people behind the project recently bumped its way to the top of the screen, just under the mission-critical stuff like “title,” “goal.” and the project video. Which, as it happens, was pretty much where Kickstarter put it, so “great minds think alike” and all that.

Where it gets kind of special is there’s that little note about “8 team members…” and it expands outward when you click that “see more details” button. 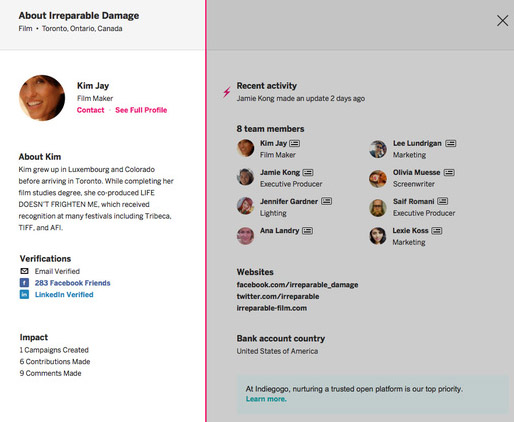 Now, in addition to having a nice little bio for the project creator to say a few words about herself, the revised pop-up has a biography, contact link and a more extended profile, and their ongoing contributions to Indiegogo as a whole–both Kickstarter and Indiegogo have this in their profile, in fairness.

I’m really more excited by the team window. In their example, they call out eight team members–marketing consultants, writers, producers, artists. Neat! If you go to an active page with a team, say this popular “micro-drone” project–you can see several team members, perhaps the consultants they’ve worked with, recent updates, and a large list of relevant websites–pretty awesome! Kickstarter only gives you one or two links and a single bio, so you have to wrestle with your personal identity vs. your corporate business name. This is, seriously, a better way of framing the narrative.

Why is this worth spending like a thousand words on? It’s a tool to build credibility. If a project has a team, it shows that there’s been some planning and logistics. If it has a strong, active team, with well-filled-out biographies and some interesting titles, all available at the click of a button? There’s a wealth of information about the resilience and resources you, the project creator, can bring to work to complete your goals. And it’s tightly presented, just a single click presents so much detail about the campaign–it’s a pity it’s not a little bigger!

Reviews this week: Photomorph/activisim project “Faces of the Wild“.

Tarot of the Mice (Ends: 7/13/2015)
From Califur artists Wolfenbahr Arts, a lightly furry tarot featuring mouse tarot cards.
Feel like this might move a little better with more examples of artwork, as it is very little detail to guess what you’re getting (color, B&W, detailed, sketched?) Still, tarot decks are fun on their own and a lot of work goes into them. Not a lot of solid examples on the artist’s FA Gallery.

Into the Wild: Coloring Book (Ends: 7/14/2015)
A gently abstracted coloring book for adults, with some nice imagery. Particularly that wolf!

Faces of the Wild Photo Book (Ends: 8/3/2015)
A photo project focused on the “silence of captured animals,” with photo morph and make-up effects
This is perhaps too scary to be compelling. With no backers after launch, this interesting project isn’t going anywhere.

Child of the Daystar (Ends: 7/11/2015)
Novel: A dragon/reptile mercenary on a quest for vengence and…
Is there an …and? Is this just another Gritty Killer Haunted By His Past? He’s a real hottie, so I’ll let it pass, but worth asking.

Shit Flingers: Bestiary (Ends: 7/6/2015)
Graphic novel anthology: A troop of 15h century French soldiers find themselves cursed and transformed into apes, and fight the occult battles of the Church.
More on the comic’s archive tumblr

Torsobear #2 (Ends: 7/8/2015)
The latest entry in the noire-plush comic anthology category, “toy-on-toy crime in a fantastic city of playthings.”

The Heart of a Star (Ends: 7/24/2015)
A young deity comes to earth to fight her nightmares and play a game/romance of cat-and-mouse. Art by Sahtori Kamaya.
Nice work in a lush anime style, though the wall of text and personal narrative is hard to wade through.

Furries: The Movie (Ends: 7/17/2015)
NOT another documentary, a strange indie film, a sort of surreal Wes Anderson-esque journey into strangeness. I’ll be asking the artist about the actual furry interest level of this one, I’m not sure!

Midnight Mares (Ends: 7/20/2015)
Brony-inspired animation in a world between dreams and reality. Second tilt at the funding wheel.

The Juicebox Crew (Ends: 7/30/2015)
80s style animated series with an anthro cast, including a gothic possum.
Very high goal of $150K doesn’t seem realizable without a strong product, I’m not sure they’re there. More about the characters.. 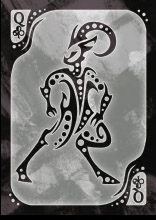 The Isle (Ends: 7/4/2015)
A simulation/survival game with strategy elements, players represent a faction of dinosaurs or humans.
By Don Wittich, the developer of Primal Carnage, with art by LeviaDraconia

Scout’s Honor (Ends: 7/11/2015)
Side-scrolling platformer, an artsy gypsy cat becomes the focus of a galactic conflict.
Cute cat, very Young Furry Artist. The low $500 goal is good for start-up funds for a personal project, may never be a polished final piece though.

Beast’s Fury Fighting Game (Ends: 7/23/2015)
Another tilt at the crowdfunding wheel for Beast’s Fury, the furry fighting game
Campaign #3 for this game. With a $185000 goal and very little result so far, I wonder if they’ve squeezed that lemon as much as they can.

Briar Nexus Safe Haven (Ends: 6/28/2015)
A furry/Therian/LGBTQ/Physical Illnesses safe space social network.
Hmm. I’m not sure that “furries/abused/Therians/illness/Queers/people of color” is really a target audience. It’s a good-hearted idea, but a bit all over the place.

Alice and the Flowers Giclee Prints (Ends: 7/13/2015): Sumptuous and horrible flowers inspired by Alice in Wonderland and her journey through the garden of monstrous flowers. Neat stuff! Dragon-lovers might get a kick out of it, in particular.

Pokemon Metal Playing Cards (Ends: 7/12/2015): I really wanted to like these stainless steel cards, and a fandom riff on them sounds fun, but the artwork just doesn’t carry the project for me. Can’t find other work by the artist.
The Nacent (Ends: 7/14/2015): Not sure what’s going on with this, a kind of snarky metroidvania/RPG. It’s there, it’s got a very high goal, and it mentions Furry Fuel. Kind of an MST3K-driven exploration game? Good luck, guys. Fox fursut in the video.