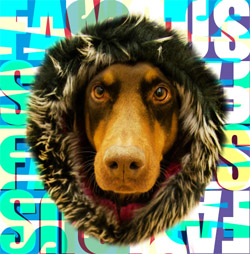 I had a friendly email from Claudia Bacco, one of the photographers of the “Doberfrau” photography campaign, asking for a little callout. Happy to oblige, I really like her retro-pop aesthetic, the colors of the 80s and the dobermans of today. Thanks for sharing these images, Claudia!

Anthrocon this week, looking forward to that brand of chaos, my first megaconvention. Keep an eye out for me, I’ll be at the Kaze retrospective event on Friday and generally milling around the rest of the time, look for a green shirt and tie and black jacket. Say hi if you have a second! 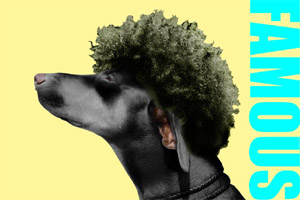 Friday the 4th–the Kaze Retrospective panel–is the launch of Kaze: Ghost Warrior’s next chapter, the new incarnation of the 2004 animated “Kaze” film by Amadhia Albee. I’m working with her on her Kickstarter launch, dealing for the first time with the issues in an actual Kickstarter campaign (and working with another artist…) More about this project on Friday, and I’ll be sure to post a “project in review” in the Resources section. Come if you can, Amadhia’s an amazingly talented person in a wide number of fields.

Just two mini-reviews this week, I’m going to return to my goal of two or three blog posts a week after August when the campaign is over. So until AC, here’s a quick look at a few video games–not vouching for both of them, one’s a bit weak, but the concept art is good for a look.

See you in Pittsburgh! -Corbeau

Lupyroo’s Startup (Ends: 6/16/2014)
Lupeyroo‘s badge commission startup
I’m really not a fan of this project. If you can’t get commissions on FA, you’re NOT going to do any better on Kickstarter. Crowdfunding is for projects, not commissions. Okay, I’ve said it.

How to Become Horsefamous (Ends: 7/11/2014)
Horse-famous, if you don’t know, is the tongue-in-cheek Brony version of “popufur.” This is kind of the pony version of bad-furry.
Cute, but the project is a little unclear and weak on professionalism–not surprising, given the subject matter, but not a confidence builder either.

The Future Is Cute (Ends: 7/25/2014)
Kawaii little critters explain science, economics, and the world in general. And they’re cute while doing it.
The typography of this project doesn’t match the project or its tone well, it’s cute but doesn’t seem to be making progress in funding.

Hokey Bear Storytelling Project (Ends: 7/27/2014)
Surreal bear-human multimedia strangeness and experimental storytelling from deep in the woods and the subconscious.
Strange stuff. Arguably spawned in the same section of the brain as furry, but expressed in a deeply right-brain way…

The Moribund Mouse (Ends: 7/21/2014)
Second of a “children’s books for adults” series, after “The Existential Giraffe,” about a mouse who goes YOLO after receiving unexpected bad news…

Without My Coffee (Ends: 7/23/2014)
Parents are MONSTERS without their coffee, as this book illustrates. 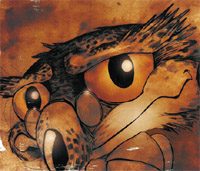 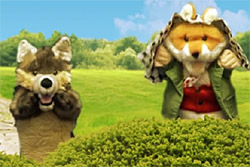 I always get nervous talking about religious stuff because furries are as a category anti-religious, most geeks are. But this really is adorable.

Sunny Creations Tee (Ends: 7/23/2014)
Mini-campaign, cute tee by Sunny Creations, fursuit maker and artist. Sort of a “my other shirt is a husky” sort of idea

Sympathy for the Devil (Ends: 7/22/2014)
A documentary about the endangered Tasmanian Devil, currently threatened by transmissable cancer (yes, that is a thing)
The goal on this one is probably unreasonably high for a first-time crowdfunder.

Catlateral Damage (Ends: 7/11/2014)
BE THE CAT. Knock things off the shelf and onto the floor. Repeat. Repeat. Sort of a feline goat simulator.
Already $4K past its $40K goal!

Redneck Assassin (Ends: 7/28/2014)
Third-person stealth shooter game for mobile devices, Bambie mixed with Kill Bill.
Second time around for this project with a strange funding goal (a goal of $5 is more a joke than a goal…)

Teddy Love (Ends: 8/15/2014)
It’s a teddy bear. It’s a vibrating toy you can take with you on the airplane without explaining.
I think I’m going to pull this one down soon, it’s too silly not to post but not really on topic…oh, how we make justifications.

Save Africa’s Wild Dogs (Ends: 8/25/2014): A project to tag and track endangered AWDs in Kruger National Park, Africa. Campaign’s very short on backer rewards, but AWDs are an amazing species…

Yomi fighting game (Ends: 7/17/2014): A melee/strategy fighting game with 20 decks, covering a range of supers, supernaturals, and a few anthro characters. Nice illustrations and WAY past goal. I just want the dragon, thanks.