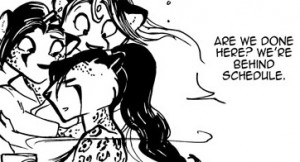 Back from Anthrocon! What a treat! One of the highlights for me was an excellent panel on business for furry artists by the artist of the biz/art webcomic, “Three Jaguars.” Her website is totally worth a review, with loads of great advice for artists seeking to monetize, and of course crowdfunding. I figured that crowdfunding would be a major chunk of discussion and made a friendly effort to get on her panel as a speaker, but she wasn’t having any of it. Fair enough, she did a great job, let me talk a bit–I’ll be borrowing heavily from her for Texas Furry Fiesta  2014 though! 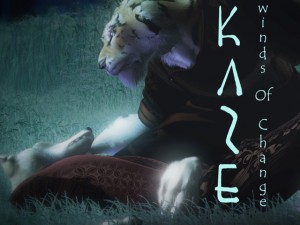 Amadhia Albee, animator and creator of Kaze: Ghost Warrior (check it on YouTube) had her launch panel–there was some scheduling SNAFUs and we didn’t make it onto the schedule app, unfortunately, but it was a nice event, and I got to be on stage with her, since we’ve been collaborating on the kickstarter for her new audio drama set in Kaze’s world. After a week, we’re almost to what I personally believe is the campaign’s goal of $2300! So exciting, and SUCH an immense timesink :) This project is the main reason I’ve been slow to update the blog, and I thank you for your patience.

Not a lot to actually say about this one because its’s not officially a “thing” yet, but if you are a fan of AlectorFencer’s furry/fantasy art, you’ll be interested in her upcoming graphic novel project, “Myre.” Overall, it sounds a bit like something from the “Labyrinth” school–creative dreamer gets lost in fantasy world–but instead of a world, AlectorFencer promises us a universe. I’ll absolutely be doing a full write-up of this project, the illustrations are lush and the world is ambitious.

Expect Myre to launch in late July. FoxAmoore and 2 the Gryphon were there for the project’s panel discussion, lots of big names, and an ambitious new book. Please join me in supporting this one. 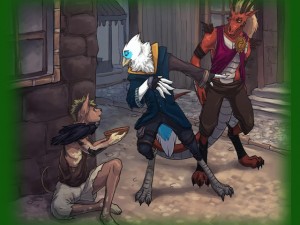 And a little update from an old friend, the team behind “Terrene Odyssey” is taking another tilt at the crowdfunding windmill for their turn-based, JRPG style game, loaded with dragons and bird-folk and elves and explosions.  I’ve been following this project for well over a year now, the team is very enthusiastic and it’s a neat product, particularly if you’re a fan of “Final Fantasy” and other such games. I didn’t do a new article about Terrene Odyssey because I really covered it pretty well back in the day, but did touch up my original review of the project to include their new information. A few months ago they sent me a bundle of swag from the game, one of the “updates” may show me playing merry Christmas in July with the bag of goodies :) Look for a dork with a ponytail, but that may not be helpful. Good luck, guys!!

On a frustrating note, everything I know about Kickstarter is wrong now, they’ve revamped their policies to allow ANY project through their doors, except fundraising for charities. There’s some plusses to this, but in a week it turned my beloved Kickstarter, which gets more of my time and affection than my patient, patient mate does, into a comedy website, loaded with joke projects. The tide seems to be slowing somewhat, but for all practical purposes Kickstarter and Indiegogo are identical now…and frankly, Indiegogo has better tools. I never thought I’d say that, but…strange times.

Little is Left to Tell (Ends: 8/2/2014)
A “talking animals” style book, stories told by a man with dementia–a rabit that must eat pages from books in order to speak, Virginia the Wolf trying to draw her daughters home with her last novel and holding them captive for readings…strange, magical stuff.

Mad World (Ends: 7/30/2014)
Not so furry, but a surreal dream-fantasy about an artist lost in an alternate world.
But there are cat-girls and crow-guys, so it counts.

IdleStatus: Splitting Hares (Ends: 8/8/2014)
Web-to-print comic about a purple hare with dog fangs (?), his love, and a villian. From the webcomic

Awesome Posum (Ends: 8/11/2014)
A natural science anthology collecting short edumacational comics together for your science use.

Fish of the World (Ends: 8/9/2014)
Cartoony/chibi anthro kittens and the many ways they use fish in their day to day lives. Bookmarks and charms.

Magnesium-Empire (Ends: 8/9/2014)
Garments (mostly for ladies, unfortunately!) decorated with intricate highly reflective designs. These would look amazing under a strobe light!
No, not furry, but I would totally wear this if I was a skinny raver.

Birds N Bones Jewelry (Ends: 8/16/2014)
Jewelry collection inspired by dragons (and other animals, but…dragons!)
More of the artists’ range of work at their business home page

Simon’s Cat “Off to the Vet” (Ends: 8/6/2014)
A full-color treatment for a new episode of the supercute cat series from Youtube channel

Animating the Soul (Ends: 8/7/2014)
A return to funding for animation/anthro movie about the artists that bring anthros to life.
I believe this is the third IGG campaign for this film, they’ve broken up their goal into bite-size chunks but…donor fatigue.

Wolf short horror film (Ends: 8/9/2014)
A moody psychodrama about a woman who discovers that she can commit an evil act, edited to look like a dreamy 80s low-budget.
I think this is a ‘werewolves as metaphor’ film, but the Kickstarter page itself has great illustrations.

TRIX.IM in Light Magic (Ends: 8/11/2014)
?! I’m still trying to decode this one–looks like an anthro movie filmed entirely in the film clip loops from raves.
I’m really only including this because the video is really, really bizaare. I don’t understand any of it. Old dogs, new tricks and all.

Amorous (Patreon Ongoing Funding)
Patreon ongoing funding (?) for an upcoming westernized dating sim set in a furry universe, with fuzzier lines between genders and orientations and such. Good artwork and rendering.
Art by Jasonafex