Rodents in Space: Of Mice and Madness presents Tails from Out There

The midsummer heat seems to have made the two big engines of the crowdfunding world run slow, not a lot of furry projects on KS or IGG–though I’d be remiss if I didn’t at least mention “Room Party,” a beer-and-pretzels card game about cons and party-crashers, but with the star-power of Blotch and Sofawolf Press behind it, it feels a little redundant! So a little quiet time this Sunday with a sweet little comic/graphic novel in the works, “Tails from Out There.”

Of Mice and Madness: Tails from Out There!

We begin with a story of what might be the galaxy’s smallest bounty hunter, and his unlikely steed: the mouse Othello, and his trusty feline mount, Oliver, hopefully a little faster on his feet than, well, upstairs. The KS funds Of Mice and Madness‘s first major project, the five-issue comic adventure of this duo. 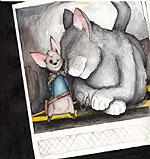 Othello falls squarely in the camp of “unlikely hero.” He’s dashing enough, for a mouse, about three inches of squeak in a cape, with a blaster at his hip that…well, I don’t know. Maybe they have really good batteries in the distant future. I can’t say Othello strikes terror, but that doesn’t seem to worry him that much. Looking at the art, I think the cat, Oliver, may well steal the show, his face is warm with a mix of warm loyalty and dim confusion.

I like where the team’s heart is. They’re ready to tell stories about character growth, of making choices that might be good, might be bad, of mice with big dreams that may not be cut out for the top 10 list in their quarter of the galaxy. I’m a comic buff, and even in the edgier mass-market series, characters tend to be larger than life. The indie comic world is where ambiguous characters, folk who aren’t predestined to great things or tragic failure, go. By and large, we aren’t going to be headliners in this life, not for more than a shining moment, and that makes a mouse like Othello more human than the cast of Fables  or the latest super-mutant X-title spinoff.

If I was to criticize this project (and I don’t particularly want to, it’s so damned cute), it’s got a bit of an amateur edge, in several senses of the word (it literally means “one who loves”…). The video tells the story–artist has a passion for art, and like Tolkien blowing 500,000 words to give his Elven languages a place to live, the creative team really liked drawing mice, and started a comic series to build a mouse house. Is that bad? No, not a bit, it certainly worked for Tolkien! But there’s a youth to the Kickstarter–the video that focuses more on the creator’s story than the product; a price tag that seems  too high for a comic series, compared to similar product; the graphic novel version only available at $250 (yeah, yeah, “Kickstarter isn’t a shopping site,” but really, it is…) and you can smell the “new code” smell on the website. If they don’t make goal, I hope the mice come back with a new coat of paint, because these are good mice, and they deserve to see print. Good luck, guys!

Wildcast of the World (Ends: 8/25/2013): A web-based interactive resource to spread awareness of the remaining sildcat species.
Save Virachey Park (Ends: 9/10/2013): Campaign to install motion-trigger cameras in Virachey park, Cambodia, to show it’s a worthwhile preserve of endangerd species. Do it for the dholes!

Meme Plus Cats (Ends: 8/17/2013): Stuffed and cartoon anthro versions of a hoste of meme cats (a plush grumpy cat and friends…)
Stories of Bappa (Ends: 8/22/2013): Children’s graphic novel series featuring Bappa and Mushakkraj, an anthro elephant and his mouse steed.