This week’s illustration is from the animation project, Gym Rat Squad.

I have been up to my elbows in smutty projects lately. On and off I’ve been bookmarking and skimming adult projects on Kickstarter and Indiegogo, to see how those projects fly, and what the general range of acceptability is.

To clarify, Indiegogo will let you fund almost anything, as long as the content on their home page isn’t objectionable or illegal, but they want to keep their site family friendly. Outright pornography may actually be beyond the Indiegogo pale, I haven’t seen that tested yet (of course, that could be because the pages got pulled down, it’s hard to say.) At the end of the day, though, they don’t want nudity on their page, which seems to be their biggest sticking point.

Kickstarter has rules against pornography, even as a reward/project, so you can’t post a project with pornographic content and just not display imagery. However, they have no problem at all with artistic nudity, even on their project pages. I have seen evidence that male nudity is much less artistic than female nudity, but it’s not something I have the ability to prove.

Anyway, that’s where my head’s been. The world needs to know.

Mice and Man (Ends: 9/16/2014)
Sentient animals battle and scheme in a post-apocalyptic future 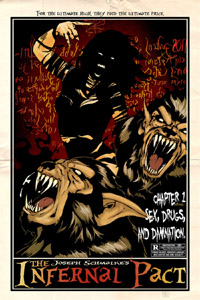 The Infernal Pact (Ends: 9/29/2014)
A “Grindhouse” style comic miniseries featuring werewolves, junkies, and a deal with the devil.

Deer Neil (Ends: 9/29/2014)
Webcomic, a geeky deer living his geeky life.
This looks cute, but I can’t get any idea of what the comic looks like beyond one image in the video. Creator’s website is kind of useless.

Mulmino (Ends: 10/21/2014): Many of you may remember Mulmino. From your dreams. I’m excited to see the Mulmino return to Indiegogo for another round of inexplicable weirdness and strange reproductive practices. Go Mulmino!