Animatronic tails with Greyworld’s “Grow Your Own Tail” campaign

It’s exciting when a team of nationally-recognized professionals with good technical know-how get playful, but I suppose Greyworld started out playful. They’ve turned their artistic brains to the important task of “how to make a tail that ACTUALLY knocks glasses off the table.” I totally missed this campaign’s launch, but there’s still time for their 10-day countdown.

Greyworld: “Grow Your Own Tail”

First a few words about Greyworld. This is likely to be the only fur-friendly kickstarter in which the poster has probably gotten a +1 from the queen of England, so it’s worth looking at the “who” as much as the “what.”

Greyworld is an art collective operating out of Britain,

emphasizing interactive public space art. Their most visible and public piece is almost certainly The Source, a massive sculpture at the British Stock Exchange that represents stock trade as organic, drifting glowing orbs, almost 1500 of them. They’ve created flowers that show the changes in an office complex, interactive digital art for Nokia, clockwork trees, and a glowing sun in Trafalgar Square.

So really, it was a foregone conclusion that Greyworld would make something that furries can strap to their butts. 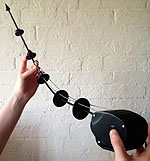 The technology is fascinating to look at–Greyworld has machined many of their own parts, so there’s a feeling that, on every level, their product was meant to be a tail. There’s an assortment of furs and shapes–skunk and husky, fox, leopard–their Tumblr has a better range of visuals than Kickstarter–they’re even looking into customized motion programs, down the road. The KS video isn’t bad, but Greyworld says their tail has much smoother motion–the video is of an early model, and for some reason, the video’s glitchy.

All of which is neat, but the furry community has had motion tails for a while now (the quality of these is high, but it’s not a new idea, not really). Personally, what I find exciting is the story behind it–a major art group is producing these tails, and their focus is on art in public, playful and interactive art. Their video jokes about tails showing people’s “naughty sides,” expressing emotions that the human side might not be able to show. But core to their mission as an artistic engine is playful, creative expression in public, urban spaces, and Greyworld has chosen to use these twitchy tails as a way to do that on an individual level. Personally, I’m glad they agree with us furries on this issue.

[I’m imagining the Monty Python sketch where the Queen of England comes to get her custom tail for her £500 pledge. “We would like a corgi tail.” “You Majesty, they don’t have tails, they’re stubby things.” “Nevertheless!”]

Sonic and Halo Orchestral Medley (Audio. Ends: 10/6/2013)
A modest campaign for orchestral production of a Sonic: The Hedgehog “best of” medley and Halo. Most of goal covers the cost of hiring an orchestra for $2500/hour… (More of Mr Trent’s arrangements on YouTube)

Grow Your Own Tail (Clothing/Costumes. Ends: 9/12/2013)
DIY and completed animatronic tails with hand controls and a “wag to the beat” mode

Pony Scarves (Clothing/Costumes. Ends: 9/30/2013)
Pinkie Pie and Rarity cutie mark scarves. (What, no “Big Mac”? Other designs at Ponyscarves…guys, get a website!)

PairofMares Productions (Web. Ends: 10/13/2013)
Small fundraiser for materials for My Little Pony reviews podcast (This may be an “imagine the final product” project, since they’re hoping to get new artwork…still, it’s a cute little dream.)

Help create the Coywolf Association (…Causes. Ends: 10/25/2013)
A national association to protect coywolves, yotes, wolves, and crows and ravens. Why crows? Maybe they’re trying to get Blotch to do their banner art.

Fire Breathing Dragon at Artprize (…Just For Fun. Ends: 9/15/2013)
Yeah, it’s in Michigan, but how often can you help crowdfund a giant, color-changing, fire-breathing dragon?

Fetch: An Illustrated Book (Ends: 9/21/2013)
Whimsical illustrated adventure book with a “special effects” feel about were dogs come from, and their carefree homeland.

Dog Breed T-shirts (Ends: 9/23/2013)
Huskies: represent. A series of miminalist silkscreened dog breed loyalty tees.
I’m not chipping in for this until they post a Mexican hairless design.

Flashy the Overlord (Ends: 9/4/2013)
A graphic novel with simple watercolor illustrations about, possibly, coming of age and taking the throne in a fantasy kingdom.
There’s a strong interactive element in this project, community-building and writing yourself into the plot.

The Ballad of Thundercluck, Chicken of Thor (Ends: 9/4/2013)
“Half mortal. Half god. All natural chicken.” Short animated film with a Celtic style, like a silly Secret of Kells. Ride with Thundercluck into glory!

Sanpomichi, A Little Oze (Ends: 9/9/2013)
Stop-motion film of a mouse’s daily life, her habits, her family challenges. Graceful slice-of-life.
I’d love to watch this back-to-back with Blood Tea and Red String. For contrast.

Samurai Chinchilla: The Animated Short (Ends: 9/12/2013)
Relaunch of the project, now with more stills, concept art, and of course an origami kitsune.

The Labyrinth (Ends: 9/12/2013)
Short film: a sympathetic and stop-motion look at the birth and life of Asterius, the Greek minotaur

Forbidden and Unbreakable (Ends: 9/23/2013)
Live-action feature film, a romance between a young woman and a science experiment (Science: creating a better anthro border collie for the future!) and the secrets that keep them apart.
The IGG page is a bit light on plot details, more information on Junto Box.

Monster Derby (Ends: 9/11/2013)
A quick and silly board game of racing monsters.
The first 20 seconds of the KS video is particularly worth watching. Maybe not so furry but cute werewolf and minotaur.

Kitsune: Of Foxes and Fools (Ends: 9/11/2013)
A card game of tricky kitsune plotting against foolish mortals, and possibly a tanuki.
Wait for the line in the video, “These are the foxes we’re not using.” Kickstarter proceeds are going toward improving the artwork, so hard to get an idea of the final product.

Awakened Villagers of Cairn (Ends: 9/19/2013)
“Bicycle” cards featuring the quirky, detailed furry art of the “Cairn” RPG–rodent fans and Redwall enthusiasts, this is for you.
The Cairn RPG has its own tragedy/success story, SoulJar Games has picked up where the original KS project left off.

March of the Art Dolls (Ends: 10/8/2013)
Ochoa‘s line of art dolls, a variety of expressive and wooly beasts

Save Mr Egg (Ends: 9/18/2013)
Fox chases egg in this odd little video game.
The visuals on the fox are interesting. I’m not sure who I’m supposed to be cheering for.

No Good Deed: A Macrophilic Choose-Your-Own-Adventure (Ends: 9/13/2013)
A multi-ending illustrated book-on-CD, with transformations, macro growth, and the occasional demigod. And lots of naked giant dragon critters.
Look for DNA‘s work on FA.

Furrycc (Offbeatr prelaunch voting): Pitch, vague and unformed, for a new furry chat website. May be adult. Pledge $25 and you can be a mod!

Save Virachey Park (Ends: 9/10/2013): Campaign to install motion-trigger cameras in Virachey park, Cambodia, to show it’s a worthwhile preserve of endangered species. Do it for the dholes!
The Hyena Sanctuary of North America (Ends: 10/10/2013): Help build a Texas home for the hyenas of the Berkeley hyena program!

La Divina Caricatura (Ends: 10/1/2013): An American Bunraku-style (Japanese puppet theater) production, a pop opera with a few beautifully done anthro puppets, worth a visit to the IGG for the characters. 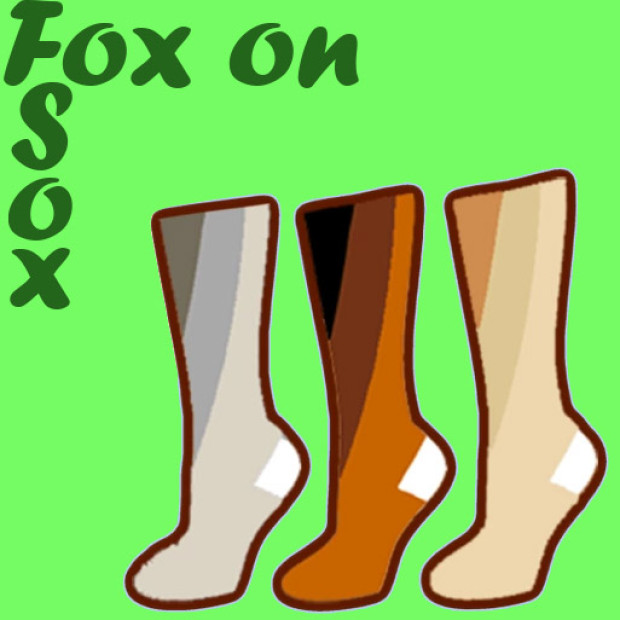 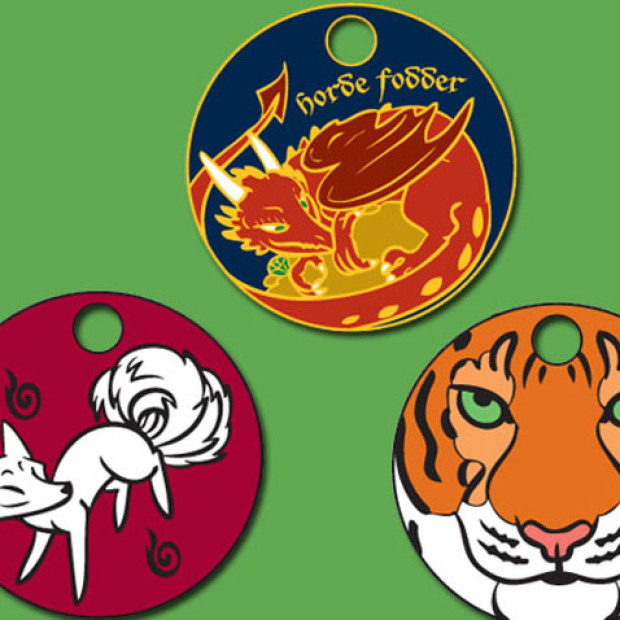 Collectable medallions with a broad range of art... Paw Coins Collectible Coins Kickstarter ending 11/24/14 The word for the day is "Exonumia." One of the things I hope to see in endlessly refreshing Kickstarter is the next big con craze. And I know I won't see it coming, or I'll... 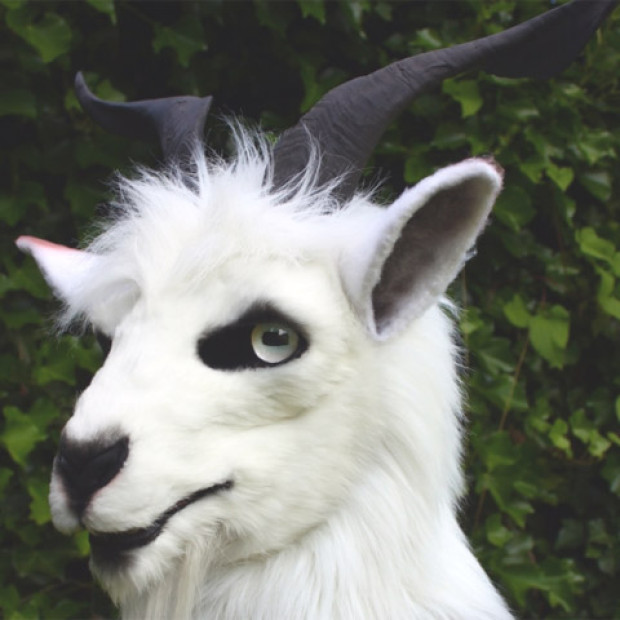