Week in Review: For the Kids

Another slow week in fox-based crowdfunding, only one solidly furry project! I’ll cover Peter Is The Wolf next week. This week, briefly touching on a few visually interesting kid’s projects. Something for dragon lovers, rabbit fans, and bear buffs (the buff bear project wasn’t kid-friendly.) Remember, they have to have a childhood first if the fandom is going to ruin it later. 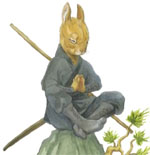 Children’s book. There’s a type of story in kid lit, a “grass is always greener” narrative, a literary style which hit its peak in Alexander and the Terrible Horrible No Good Very Bad Day. The theme: Life is suffering, but someone else’s life, obviously wouldn’t be. Now in Alexander… the protagonist is pretty sure that life would be SO much better if he lived in Australia. But we cynics all know that there are problems in Australia. Drop bears, for instance. 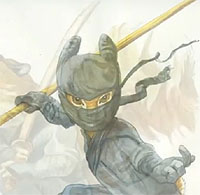 But the main character of Jared Taylor Williams’ Rabbit Ninja is pretty sure that life would be a whole lot more awesome if he was a ninja instead of a third-grader. I don’t know how Williams is going to write himself out of that corner, because ninjas pretty much define awesome.

The author/artist has a background pretty firmly grounded in animal nonfiction, with artist credits in a double handful of books, most often about the inner lives of housepets. Rabbit Ninja seems to be his first solo project, but the art style is a confident watercolor, which balances the action of the ninjaverse with the warm, somewhat sock-scented world of a third grade boy. Take a look! 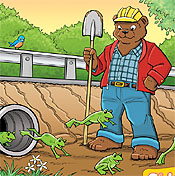 Radio Dramas. Oh, for the simple life of a Saturday Morning cartoon character, like old-school My Little Pony or Disney’s Wuzzles (anybody else remember “wuzzles?”) when the biggest crisis one faced on any given day was breaking a plate or not knowing whether you were, or weren’t, invited to Daisy’s picnic. Life is clearly more complex for Billy Brown, who has to dig frogs out of rain gutters, rescue flood victims, and take over the local mail route. (Personally, my mail service would be MUCH improved by having a bear take over.) This Kickstarter is for a new set of Billy Brown adventures, a string of 30-45 minute audio dramas played out by professional Broadway actors, lightly educational, silly without being condescending, with a strong focus on problem-solving, imagination, and above all, bears.

Hearing a bear speaking in “Froggish” is going to be the highlight of my week, I can tell already.

According to one reviewer, children’s audio dramas are a “thing” in Germany, where they’re called Hoerspiele (“hear plays”)–not just an actor reading a book, but fully produced audio plays with music, sound effects and a cast. I *do* remember that sort of story from my childhood, but it never really caught on. Apparently, kickstarter Jens Hewerer brought that tradition back from Germany to share with us benighted Statesians.

The Dragon and the Princess

Children’s book. It’s hard to say much about this, the world is not rich with hot tips about The Dragon and the Princess. I do know that TDATP‘s unreasonably-named original poster (and possibly supervillian), Logan Otto Uber, has been involved in webcomics and one swinging alphabet book, both with a cartoony and very “guy” art feel. On the one hand, he’s a kickstarter veteran with two successful projects under his belt. On the other hand, what’s he doing fronting this graceful book about sweet, delicate dragons and a perky princess? Clearly, he woke up on the pink side of the bed one morning. 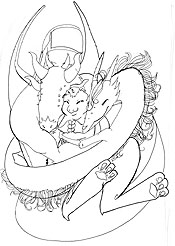 Artist Mina Sanwald is clearly up to the princess challenge. She probably owns a set of color-coded hennin. And when I made the pink joke, I had no idea how pink Sanwald’s website would turn out to be. Her DeviantArt account is considerably less pink, which is a good thing, I’ve had enough fuschia for one day.

Babble, babble, get to the point. Dragons! TDATP is a charmer, a one-to-ten, ten-to-one story about a happy dragon family, which begins “One dragon egg, about to hatch…(spoiler, there’s 10 of something.) The dragon illustrations are absolutely charming, with graceful curving bodies and winning expressions, and the princess–well, we don’t get a look at her, but she looks dangerously sassy. And my thumbnails don’t do them justice. Even if you don’t have a kid, if you’re a dragon or a dragon lover, this project might be a great Christmas present for someone who does have a hatchling.

Peter Is the Wolf: Living in the Doghouse (Comics/Graphic Novels. Ends: 11/24/2013)
Web-to-Print of the Peter Is the Wolf webcomic series, manga-style, sometimes NSFW, cute and sexy werewolves.

Long-Term Parking (Film/Animation/Theater. Ends: 10/20/2013)
A bounty hunter who dies and gets mixed up with a dog on his way to heaven. Heavenly comedy ensues. (Read the opening vignet, it’s cute! )

Unwritten: Echoes of Twilight (Video Games. Ends: 10/28/2013)
Single-player, open world fantasy RPG with some nicely-done werewolves and bear-folk. (Now, I’m not sure the video gaming world is ready for werewolves AND bear-folk in the same game…)

Wolf: A Book, a Dream, a Legacy! (…Meh. Ends: 11/1/2013)
*Sigh* The author overshares a story that LOTS of us dorks can relate to, but passion is not a business plan is not a product… But hey, werewolf novel.

Sonic and Halo Orchestral Medley (Ends: 10/6/2013)
A modest campaign for orchestral production of a Sonic: The Hedgehog “best of” medley and Halo. Most of goal covers the cost of hiring an orchestra for $2500/hour…
More of Mr Trent’s arrangements on YouTube

Come Find Me: The Journey to Abbey Road (Ends: 11/7/2013)
Foxamoore‘s new album, now well past its goal to record at the Beatle’s “Abbey Road” studio!
Additional stretch goals to get art by Alectorfencer, professional production, more studio time, and a full orchestra!

Jack and the Cornstalk (Ends: 10/26/2013)
Children’s book with Claymation-esque chickens spoofing “Jack and the Beanstalk.”
Why is Yoda in the publicity shots? Mysterious he is.

The Anteater That Didn’t (Ends: 11/3/2013)
In the spirit of “The Little Prince” and “The Giving Tree,” a delicately French story of anteaters and tea.

Hats and Hoodies by Mermade (Ends: 10/16/2013)
Hats, hoodies, and accessories by Mermade. Check out Her gallery on FA for custom and recent work!

The Aviary: When Bird Became Woman (Ends: 10/5/2013)
a 12-gown haut couture collection of dresses inspired by birds, coming this October to San Diego.
The bluejay is pretty amazing.

Dawgtown (Ends: 10/20/2013)
Animated film, a pit bull’s journey in the underground dog fighting world
The stills and clips are pretty high quality, I’m reminded of “Felidae.” No way to get a DVD though (sad face).

Pewter Ponies: Miniature Ponies for Tabletop Gaming (Ends: 10/17/2013)
On track to unlock at least 30 pony-style minatures for all your tabletop pony gaming needs!
Note: Tabletop pony miniatures is not “pony play.” Glad I corrected that.

Hockey Doggies (Ends: 10/17/2013)
A semi-educational board game putting huskies on the ice.
Sadly, from what our friends at the International Anthropomorphic Research Project tell us, anything at the intersection of “furries” and “sports” is doomed to failure…

March of the Art Dolls (Ends: 10/8/2013)
Ochoan‘s line of art dolls, a variety of expressive and wooly beasts

Imagination is the Only Escape (Ends: 10/17/2013)
A child creates an imaginary otherworld to escape the horrors of World War II, accompanied by a fox named Renard. An educational game for children.
Scary and beautiful Alice-in-Wonderlandy graphics and a dark story.

PairofMares Productions (Ends: 10/13/2013)
Small fundraiser for materials for My Little Pony reviews podcast
This may be an “imagine the final product” project, since they’re hoping to get new artwork…still, it’s a cute little dream.

The Hyena Sanctuary of North America (Ends: 10/10/2013): Help build a Texas home for the hyenas of the Berkeley hyena program!
The Last Pack (Ends: 10/15/2013): Awareness documentary about the 75 remaining “Lobo” Mexican wolves

Feral (Coming October 1?): Graphic novel, or webcomic (unsure which) about an anthro underground fighting circuit. Strong, expressive artwork!
Terrene Odyssey (Not yet launched): The next evolution of the Terreria Tactics card game, coming soon to a Kickstarter near you!