One dog’s well-armed quest to find his love… 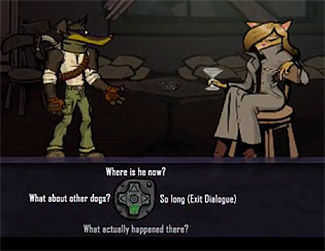 I’m going to go out on a limb here and say there’s not a lot that’s ground-breaking in this game, there are ancient cuneiform tablets describing the first side-scrolling explorers. Heck, Pitfall II had quite a map, and that was on the Atari. So a lot of what Buck describes as features seem to be more the core elements of a Metroidvania game – “Choose your own adventure” style branching dialog, a rich map with a non-linear, “take it as you find it” plot, and customizable weapons (well, that’s a bit unusual, but not in itself worth tweeting about.) That, and a “find your lost SO” plotline, spells a certain level of “we’ve played this before…” so let’s move on.

I promise, I’m not being cynical–well, maybe a bit, but this game is really pretty, with brooding and impressionistic backgrounds, a great-looking main character with a mean wrench, and a supporting cast with a poundful of NPCs pulled out of the “Buck” community, a bit of fan collaboration that extends into the Kickstarter’s stretch goal. For character art and background alone, the game’s worth a look (and a playthrough, but that’s down the road a bit.)

So, protagonists. Buck’s got 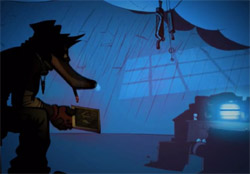 a lot going for him in life. He’s damned handy, a tinker and mechanic able to build or repair pretty much anything he finds in the blighted Cordova desert. And he’s got a beautiful girl, but alas, you should never date a plot device. Finding out what happened to her is a big chunk of the game’s plot. He’s also pretty good with a gun–one he’s trained with his entire life.

You have to wonder if some people ever wake up knowing they’re in a video game. Anyway.

Buck’s based on t

he designer’s first dog. I’ve never been to Australia, but I know in Texas we arm our dogs, so it’s all good. A lot of the background characters are also collaborations with the fan base–the cat NPC with a mission is one person’s tabby, and so on. The hyenas? No, they’re probably just hyenas.

What’s really caught me about this game is the backgrounds, which are just weird. Buck’s cool in that “Vin Diesel in Shades” sort of way, but the backgrounds have a dark, gritty, and a bit surreal look, fitting the wasteland the game’s set in–kind of like the gloomy claustrophobia of The Maxx. 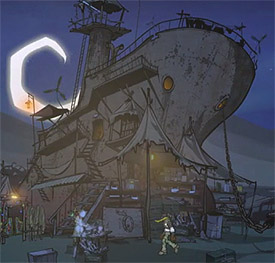 Anyway…I’m feeling I’m not really selling this one so well! It’s a genuinely neat-looking product, and solid anthropomorphic games seem like a once-a-year sort of thing, and a compelling setting and story can outweigh innovation for innovation’s sake. Watch the video, the visuals are well worth it.