Buy an iguana a latte?

Art, reptiles, and webcomics by the creator of “Broken Plot Device”… 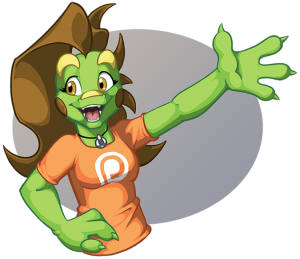 I first encountered Lizardbeth’s work at the dealer’s den at AC, and immediately fell in love with her work. She’s absolutely in the cartoony camp, but with realistic proportions, a lot of great facial expressions, the kind of friendly, approachable stuff that got me into the fandom so many years ago. I got the print versions of her webcomic, “Broken Plot Device,” and unfortunately had finished them all by the time the plane landed. 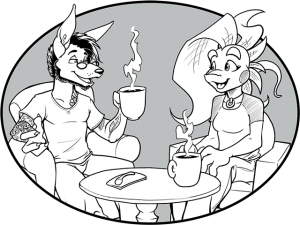 So I went to the googles. I searched around and found her artblog and her various accounts on FurAffinity, shed a tear that BPD was no longer an ongoing webcomic, and then got inappropriately giddy over her upcoming page on Patreon. Partly because it gave me a chance to throw pennies at new webcomics and projects from an artist I genuinely love, partly because I always get stupidly worked up over Patreon pages, partly because I could fabricate a convincing excuse to commission a cartoon. Yay! Anyway.

If you want to get a feel for Lizardbeth’s work, her FA gallery goes a long way covers a huge swath of time, with art all the way back to 2006 or earlier (and an amazing consistency of style across the years.) Reptile and dragon fans will find a lot to love in her collection, not a real surprise from an artist that represents herself as an iguana. Her artblog also has a few different webcomic projects–“D20 Comics” (characters thrown into randomly-selected scenarios), and some cheerfully self-referential fantasy work. 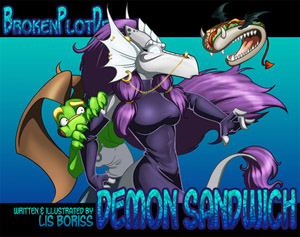 That being said, her best-known venture into webcomics has to be the anthro-and-ninja and geek life title, Broken Plot Device. With lots of coffee jokes, guest appearances by Doctor Who, World of Warcraft references, entire plotlines based on pokemon, ongoing scenes from conventions, and tabletop gaming geekery, it’s a fun cross-section of The Dork Experience–but with rather more dragons and ninjas and beefcake pirates and robots.

I feel there’s a genre of comics that’s encapsulated in Broken Plot Device–gentle escapism mixed with enough High Weirdness to drive a comedy plotline. Let’s call it “slice of ‘if my life was that cool.'” It’d be impossible to avoid a comparison to Sluggy Freelance, and just as impossible to escape its influence as the strip has been running since 1997 and is arguably the most successful webcomic in the multiverse. There are some parallels–both stories revolve around life in a geeky semi-commune, with characters that, in general, place much higher on the weirdness spectrum than the people likely at your comic shop, though not quite as weird as the characters inside the comics themselves (unless you’re buying a bound collection of the webcomic, in which case this entire paragraph has gotten way too meta.) There’s a McGuffin-crafting engineer, a mage, a self-appointed lady’s man, one or two animal mascots.

But influenced by is not at all the same as derivative of, particularly in the everyman (everywoman? Everylizard?) character of Liz, who’s an island of comparative normalcy that keeps the rest of the cast grounded in something like a day-to-day world. There are plots that dip a toe into real-world relevancy and mature situations–relationship awkwardness, characters forced to be suddenly mature, a coming out story (really, it’s required in every furry slice-of-life, isn’t it?), dealing with the aftermath of a traumatic situation–some real emotion.  The art is also several steps above what is usually required in a 3/week webcomic, with lots of appealing and interesting characters, and occasional character development of same–though unfortunately the strip ended after four years, leaving a few loose ends, unexplored origin stories, and the unanswered question of “whatever happened to Sunny’s Roller Derby career?”

Now, nearly by definition, Patreon is not project-focused crowdfunding. It’s usually about “fund the artist” than “fund a specific project.” but Lizardbeth’s Patreon page does lead with a promise to, funding permitting, reboot Broken Plot Device, possibly as a full-color comic. It’s even in bold print. So I do feel justified in lavishing a few hundred words on BPD, since it’s what introduced me to Beth’s work. It’s a reasonably continuity-light strip, you can drop in anywhere, but the art quality sustains itself across the series, so you might as well start at the beginning. Or just buy the darn things in book form.

Lizardbeth’s Patreon page had some rapid evolution. Patreon, if you’re not familiar with it, has a few options on how to request payments–there’s the monthly option, great for regular content providers. There’s also the per-project (per-episode, per-post, per-painting…) option, where donors pick how much they want to pay per project, and the maximum amount they want to pay per month (a good idea if your artist makes, say, haiku. When she first launched her page, Lis chose “per livestream,” which is kind of compelling as a livestream is a great way to interact with an artist (she sings while sketching, BTW. I have mixed feelings about this.) After a while, though, predictability and ease of use won out–better to know how much funding you can expect during a given month, easier to explain to her funders (when asking for money, keep the end-user experience as hurdle-free as possible!), and basing your support structure on your artwork instead of a buggy piece of technology? Better still.

What’s in the future for Liz? She’s got some decent traction for a new Patreon artist, though it’s going to be a slow-growth process. Patreon is an excellent way to get out of a cycle of commissions and into the sort of art that built an audience to begin with, and as her monthly funding grows, we can expect to see a return to Broken Plot Device, as well as some top-secret webcomic projects with a little less fur in them. We’ll see!

Thank you, Lis, for the illustration!