A grim march across a hostile land, but with bunnies.

I knew I’d seen Jesse Labbé‘s work before. I was in Half Price Books and found a strange, magical little book–a historical record perhaps, or maybe a tactical guide, or possibly a prequel for a deeply bizarre game of tiny, furry vole-things in their crazy weird-tech fantasy battle. It looked like a promo for a board game that NEEDED to be played. Apparently, lots of fans–and the artist–thought so too. 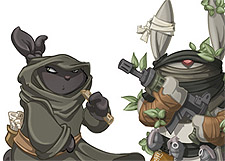 Cross Hares: Testing Ground is a board game about bunnies in battle. There’s a little magic and a little weird tech thrown in, but at heart, these bunnies are on a grim march through hostile terrain. “Traps, enemies, and the land itself are against you. Lose your way, and all is lost, but what lies at the end of the path is worth the risk.” You may want to have “Apocalypse Now” playing in the background, for that fresh “grueling death march” feel. Or “Watership Down“, which is, also, a bit of a death march.

Game play is what Labbé calls a “trail-based board game.” In particular, he mentions “Fireball Island” as a strong piece of inspiration from his childhood–characters walk a winding trail around a volcano to steal a jewel from temple at the heart of the island, with cards, special spaces, and hazards to keep things interesting (otherwise, it’s Candyland with more fireballs). Personally, I’m reminded of  “Talisman.” Now there’s a game that ends friendships.

Anyway, the structure–a long, winding journey to the final goal. You play one of six characters (at least until the expansion sets hit), each with their own set of special abilities and equipment–the scientist, ranger mercenary, dark sorcerer, grunt soldier, bard, sniper. They are, all, for the record, bunnies. As characters advance around the board, you’ll open up Stronghold Cards (generally beneficial resource cards) Event Cards that change the game for everyone, Testing Ground cards (negative effects for your character), and so on–including Adventure Cards that open up side quests, with their own minigame board and rules.

I am amazed and alarmed by the art for the “Sacrificial Diving” adventure card. 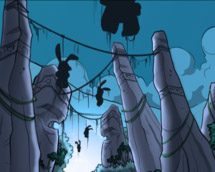 Many of the cards change depending on who you are, where you play the card, who’s near you when you play it, particularly the Adventure Cards–there’s a “never the same game twice” element to keep the game fresh through multiple plays. Even the ending can change–you don’t always grab the magic crown or whatever, the final space may be one of a range of scenarios.

One REALLY nice touch–and I can see why the artist didn’t follow through with it–is that some of the cards that repeat themselves have a few different pieces of art. Since a big part of the charm of the game is its art and its long-suffering bunnies, that’s a real plus. Of course it’s time-consuming and expensive, so not all the repeating cards have a range of artwork, but still that’s a nice gesture to the players.

So far as Kickstarter projects go, after only two days, the game’s about 20% to goal, though the goal seems a little low compared to other projects of this scope…if there are any, this is an expansive project! It seems like it’d be in the publisher’s best interests to keep the stretch goals simple (one or two new characters, a new adventure–the one they’ve mentioned is an “origins” novella. This is game company 1agames‘s second big in-house project, and it looks like one  that runs the risk of spiraling out of control and into Unmanageable Complexity Land if they cater too much to Kickstarters MOAR NAO! stretch goal culture. There’s an entire world in that box already!

Anyway, check it out–watch the video, look for the 3D printed bunny minis, and the full game board. Lots of art, lots of options, lots of rabbits!