Faces of the Wild

So…in terms of recommending this project, I don’t think I can. It doesn’t look like the artist himself is promoting it, and there’s little or nothing a page on Kickstarter can do to salvage a project that the artist doesn’t even mention on his own Facebook page. I rarely write about projects that haven’t at least taken a bite out of their goal after the first few days. But this is a handsome project and at the intersection of animals and art, and it’s worth a mention and a visit—even though it’s sitting at a miraculous $0 in pledges. Dude. At least mom should have chipped in!

Faces of the Wild is the work of Devin Mitchell, who successfully crowdfunded the “Veteran Vision” project earlier this year, a photo book of veterans, their stories, their challenges. In Faces Mitchell takes a more activist role, representing the pain and insanity of large animals trapped in a zoo environment through photomorphs and digital make-up merging humans and animals in poses suggesting blindness and silence.

The images are compelling and tragic, some are quite beautiful, a few aren’t as effective, but that’s art for you–you can see an expanded gallery of Mitchell’s work on graphic/everything blog-board “boredpanda.” He’s got some strong photo manipulation skills, and I particularly like the places where the image is mostly human, just stippled with its animal side. Or maybe I just like scruffy beards. 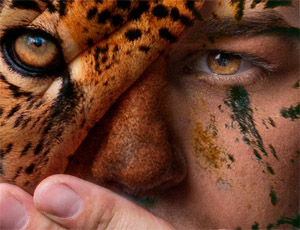 So, why the stark lack of crowdfunding success? The images are a little strange and unsettling, but that’s kind of the point.

I’m seeing three things here. First, and likely the biggest culprit, a simple lack of promotion on the part of the artist. Bare minimum, Mitchell’s facebook and the Veteran’s Vision web page should be calling out for the new project, that seems like the Big Obvious. And if he didn’t get a callout from the “Zoochosis” film that finished crowdfunding in April, that was a seriously missed opportunity. Secondly, price point may be an issue: with a base cost of $90 for the book and little incentive to buy through Kickstarter. Not having a convenient “shopping cart” pledge point can hurt your pledges.

But thirdly, I wonder if the subject matter and the specific nature of his protest is hurting him.

I do enjoy going to zoos—it’s hard to find a chance to encounter, say, a hyena or a tiger in its natural habitat, and I’m not sure I’d survive the experience if I did. But they’re not happy places generally. Particularly in small rescue zoos or old-school concrete constructions, the animals are obviously not happy. Furries are, as a community, pretty empathic toward animals, we see the human side in them and the animal side in ourselves, and it’s hard to watch a wild creature going insane from boredom, like a prisoner in solitary confinement—that’s the meaning of “zoochosis,” BTW. And certainly harder on the animal.

Is the public willing to let go of their zoos, or to make the financial commitment to the alternative? From Mitchell’s Kickstarter page:

“I believe in zoology, and the study of ethology. However, I also believe that large majestic animals should be kept in free range, land reserve environments, where there are no fences for dozens of miles. After all, this country owns so much land and I just wondered how I can spark a conversation about it.”

Zoos, unfortunately, are for humans, not for animals. They can do good work in preserving animals who are on the road to extinction, but can never really be the animal’s home. And that’s true for the majestic and glamorous tigers and lions, but it’s true for scruffy little meerkats and foxes, too. There’s probably a great German word for “a feeling of ambivalence for killing or capturing something to observe it.” (Google suggests Ambivalenz-Käfige, the uncertainty of cages.) While it is a topic that needs some serious conversation, it doesn’t seem like Mitchell and his photo project is ready to open that dialog. 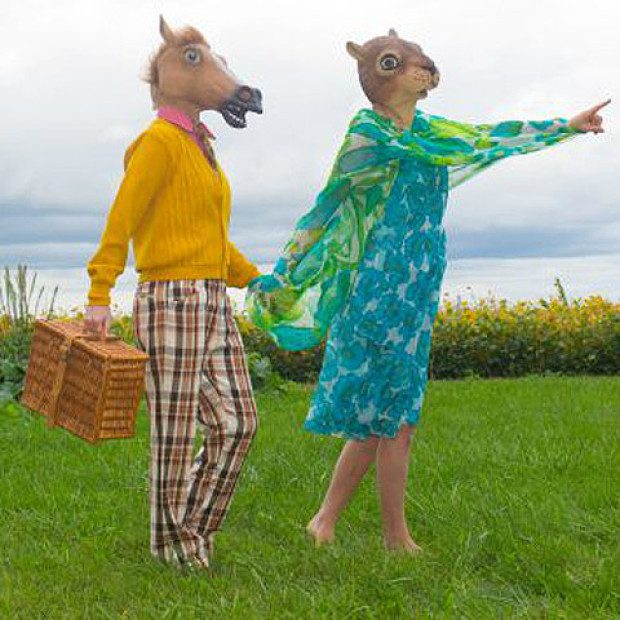