Indiegogo campaign ending 9/27/14
So, I was a fan of Matt “DrDubz” Warwick’s original FERAL project from the moment I saw it on Indiegogo. At its heart, FERAL is a martial arts manga, with one-on-one combat, stuff and people getting all kinds of smashed up, a one-person vengeance crusade, and a solid balance of plot and some glorious brutality. Which, really, I don’t care much for as a category, but FERAL really stood out of the genre. I haven’t seen another furry action title with this level of professional artwork; the protagonist is a strong female lead with some actual, character-defining flaws; and I’m in it somewhere. I’d say where, but my housemate stole my copy. So if you have a copy of Feral Vol. 1, keep it away from wolves. 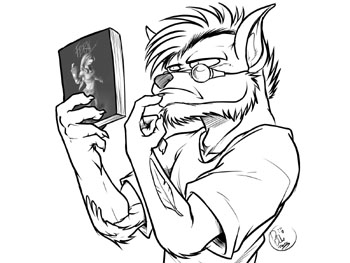 The campaign for Feral: Volume 2 just launched three days ago, and I’m chuffed to say as of this writing it’s $25 over its $2000 goal! Awesome! It’s also been accepted by the “Go Crowdfund Britain” campaign, a curated list of British campaigns touring around England and pimping local projects. Interesting concept.

Here’s the plot, super-brief: Protagonist Haley Rosa is a fighter and grifter, a new arrival to Alta City. Looking to make a place for herself, Rosa finds her way into the shadowy, semi-legal world of the FERAL fighting circuit–she has the power and skill to claw her way into a place in FERAL, but pride and rage don’t make a path lined with flower petals toward victory–the circuit is as much about honor and sportsmanship as blood and brutality. Rosa almost immediately pisses off the mountainous Dr. Brandt, undefeated champion of the FERAL circuit and nearly as influential in Alta City politics. Rosa has a long road ahead of her.

This is an unusually long post for me, and I talk about this later, but I’ll bring it up now too–check out the $100 pledge point. It’s a commission that will be included in the back of the book–but it’s also a FERAL style badge for your next con. I don’t think I’ve ever seen something like that before–first, the custom art is a part of the final product (awesome), and you can wear it later? Awesomer. 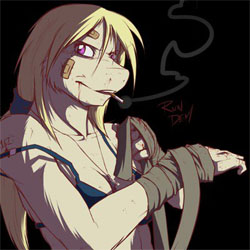 LOTS More about FERAL on the comic’s website, I also did a write-up of the first campaign, almost a year ago.  And you know, while I could gush on about FERAL for another several paragraphs, I’m not–really, it speaks pretty well for itself! This is the third campaign for Feral, all of which have been pretty strong, and it’s rare to see something like this evolve.

Dubz’s first campaign was a forerunner to the FERAL manga (I’ll call it FERAL 0 here), a pilot that was reprised and expanded in Feral 1. A lot of the elements in the campaigns for #1 and #2 are laid out here–the kind of cameo roles you’d hope for in a furry comic project, but limited–one large fight scene for someone with deep pockets. An awesome pledge point–that’s some real screen time! But once it’s sold, no more walk-on pieces, so audience participation in the project is kind of limited.

One thing I see as a common bugaboo for new crowdfunders is a tendency to talk about the creator more than the project, which is the case here–a fair bit about the artist’s journey and process, a bit about the difficulty of juggling a large project against bread-and-butter daily stuff. There’s also a strangely barren look to the campaign–just one pic, giving the overall project a rushed feel. That being said, Dubz did really well, getting over 3/4 of his $4K goal. Pretty strong for a first attempt! While it didn’t make goal–$4000 is hard for an unknown–I’d see this as a successful campaign.

There’s some minor stuff here that evolves over time–Flexible Funding is turned on, which personally I always feel is Indiegogo’s security blanket–it feels good to hold onto, but isn’t something you’d take to a job interview. Still, Dubz says that regardless of funding the project is going to be launched, so there’s a chance that it’s appropriate here. There’s also a very short list of backer awards, a digital bundle, then jumping up to $50 for a signed copy of the manga with some extra goodies, then some “Cadillac” level stuff (commissions, etc.). Not a lot of options for customers doing their christmas smackdown shopping–and no “shopping cart” item that you can take home without feeling some pocketbook sting. 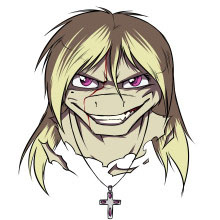 The campaign for Feral #1 has clearly learned a few things about presentation, personalization, and price points. LOTS of walk-on roles available–20 cameo appearances instead of just one long fight scene, and 10+ other opportunities for custom pieces that don’t actually appear in the book. The “cadillac” slots aren’t tied into the book itself–no glorious three-page smackdown with Hayley in the final product, but you get your own stand-alone titles, which is probably easier to manage.  Overall, a huge increase in the amount of art on the page itself, more pledge points too. Awesomeness level raised by at least 20%, but overall goal raised to $6000 from $4000. Unfortunately the returns didn’t scale up, about the same amount of money raised from the campaign.Weirdly, there was the same number of backers in both campaigns, but it looks like the $200 commissions, good sellers from #0 weren’t as hot as the $70 walk-on crowd scene stuff in #1 , so those cheaper illos may have actually cost Dubz a bit of money from his overall goal? Hard to say. Overall, with only half the goal met, this doesn’t feel like a successful campaign, from an outsider point of view. The audience didn’t follow the artist with his expanded vision.

Feral #2 is out now, with some ch-ch-changes. I had a chance to see some earlier versions of the Indiegogo page, and it started with lot of fun graphics created for the campaign, giving it a whimsical look and feel–the revision Dubz put together still has some of that unified look, but the art is grittier and more relevant to the dark tone of the book itself. Both are valid options, but for a newbie, this is more informative. Either way, the graphics designed for the campaign really help the professional tone of the project page. Most of the text is focused on the project itself (that’s good!) with lots of gritty details.

Pledge points: Dubz seems to have been compensating for that weird $70 shift with the price points, with an interesting hybrid: $100 commissions that will be included in the back of the book. I’m…I’m tempted by this. They’re also badges, which is pretty neat, since badges are the great furry underground economy. Those have been pretty popular, carrying a lot of the weight of the project’s funding beyond the big one-off $700 price point.

Of the three campaigns, this one has the lowest goal, but it’s fixed funding, not flexible–so Dubz gets about 5% more money from this one. $2000 may not be his ultimate goal–it looks more like at its heart this is a $5000 campaign–but the lower goal costs less to process, with fewer fees, and gives the audience a sense of satisfaction and being part of a winning team, which is a Good Thing overall.

Images used in this post are owned by the creator and are used with something resembling tacit approval possibly. He certainly knows what I’m up to. And THANK YOU for the pic of Corbeau, Dubz :)