A couple of fun FPS style video games came up on Kickstarter this last two weeks, worth a look for art if nothing else. Of the three, “Wild Warfare” seems like the one with the strongest business–they’re working from a strong starting position, with an alpha already in place, a good team, and enough games under their belt that they probably know how to use the money. The second, “Redneck Assassin,” I’m not quite so confident in, they’ve got that “I’ll start the goal at $5 and not edit my post” thing happening, and it’s showing in pledges. But it’s a fun story, Kill Bill meets Bambi. 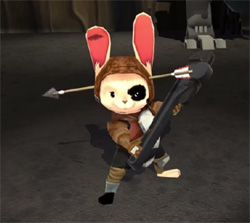 Maybe you’ve played “Wild Warfare” already? It’s been available as a free Alpha for a while now. It’s a Team Fortress sort of game, but with raccoons, bears, and bunnies running around generally wasting each other. According to the kickstarter vid, Wild Warfare started as an internal pet project, a mod to turn one of Hyper Hippo‘s existing games into an FPS (I’m thinking “Mech Mice Tactics,” the look and feel’s similar. And, mice.) What started as office fun ended up as an online alpha with a few thousand players, but not quite enough for a full game release–and so Hyper Hippo turned to Kickstarter. 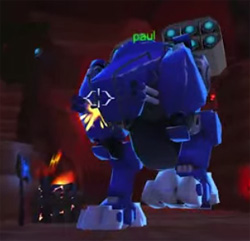 Wild Warfare is a multi-player, multi-class, vehicle-based first person shooter for web play, with a few different play modes–free-for-all skirmish, a team-play death match, and a “capture the flag” mode. The concept is simple and pure: animals run around blasting the hell out of each other with energy weapons, and sometimes there are mecha, trucks, and mechatrucks.  Right now the world of Wild Warfare is on the spare side–two worlds, and three race/classes that fill many of the standard FPS tropes (the raccoon striker/commander, rabbit engineer, and the bear, the big dumb bruiser. The Kickstarter promises more worlds, more races (they show concept art of a hillbilly ‘gator, bomb-happy armadilo, and a very slinky weasel sniper). We see the big stompy mecha vehicle in their kickstarter video, but there are tanks and off-road trucks sprinkled around the kickstarter page, presumably stretch goals.

There are also many hats. It’s kind of a running joke. I’m torn between the bowler cap–always a sound decision–and the road cone. 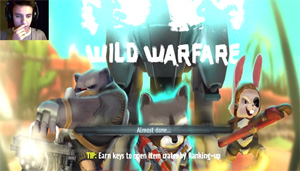 The pitch video’s images of game play are murky and indistinct, it’s a teaser more than proof of concept. Reviewer “Badass Games” has a good 10-minute play video on YouTube that gives a sense of the skirmish mode, and the pacing and general insanity level of the game.

Thoughts on the Kickstarter itself–they seem to be having a hard time gaining traction. Not being really with-it on video games, this looks like a function of market saturation–with every established and indie game developer putting their wares out for crowdfunding, and the surge of indie games in general, there’s just too much competition for the gamer dollar and attention span. They were picked by Steam Greenlight, but they’re sharing that honor with like 30 titles a week.  The game looks like a lot of fun, and the Kickstarter seems well-constructed, but the response hasn’t been great so far. 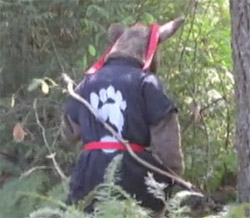 Oh, the dialogue. Did you know what rhymes with “buck?” Lots of things rhyme with buck. I’m not sure that joke sustains a script. Oh deer.

Redneck Assassin is a bloody, stealth FPS for your mobile device. In fact, “mobile” is an important part of the game’ls story–the developer, Clay Hayes, created Redneck Assassin in part as a response to the lack of a good stealth game for mobiles. The controls were a big problem for him: keeping the standard stealth game controls on the screen in the tight confines of a mobile was clunky, so Hayes set out to make a game with controls that would be where you needed them when you needed them.

The pitch video does a better job of capturing the game than still images do; the camera work is a bit too muddy for good detail shots. Also, the player’s thumbs look like giant alien monsters watching the action on their viewscreen, safely orbitting Golgathon IV.

The plot is simple and classic, largely a pastiche of Shakespeare’s later romances: You are a humanoid deer, left for dead by hunters and trained in the arts of ninja-type murderation by your sensei, Bigfoot. It’s nice how those ancient stories come back in so many forms. 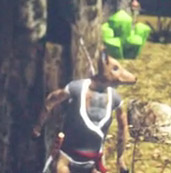 Redneck Assassin’s play is heavily influenced by Metal Gear Solid, and just perhaps by Redneck Rampage. The feel of the game–particularly the cut scenes–is meant to invoke an over-the-top grindhouse revenge flick–would this be “bucksploitation”? Certainly the cinematography does a good job of that, but the dialog…I’d say it leaves me cold, but it actually makes me reach for a bottle of Pepto Bismol. So many bad deer jokes. so many.

It looks like this is the second round of crowdfunding for Redneck Assassin, the first came and went with a few thousand dollars toward a 5-digit goal, which isn’t a terrible response. This time around response has been much weaker, as the poster has tried to do something like Indiegogo’s flexible funding by starting with a $5 goal. A lot of potential backers might be thrown by this–what are you going to possibly be able to deliver with $5? I know the poster’s already spent the money and developed the title, this is for expansion, polish, and back-debt, but the combination of the weak financial story and sloppy editing work on the body copy just doesn’t make what I see as a backable project.

Images above are used to promote/review the artist’s projects, and are owned by their original creator.