Web-to-print: Webcomics coming soon to a bound book near you. Dreamkeepers: Prelude and Not Enough Rings.

This week a pair of very successful projects, two webcomics breaking out into print. These projects have a huge advantage: they came equipped with a fanbase! And like Digger (three more days, guys!) both vaulted into success story territory within a few days of project launch. So check out Dreamkeepers, already an ebook series, and Not Enough Rings, a silly Sonic parody series. 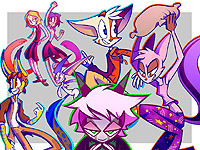 Dreamkeepers is a webcomic and graphic novel series–well, there’s the graphic novels, a dark fantasy series pitting dreamkeepers (anthropomorphic characters with a scattered assortment of powers) against the forces of nightmare. I’m not doing the series justice–though the Furaffinity page and  the trailer video help–so feel free to poke around the graphic novel previews or just pop over to the webstore and buy yourself a copy. The original GN series is pretty darn dark and epic. Preludes is more bright and friendly, the stories of the characters before they were thrown into a grim battle.

Well, of course, like all webcomics, you can pick it up online for the low, low cost of bandwidth. But the art in this stuff is beautiful, well worth the support, so take a look!

Not Enough Rings: A Sonic the Hedgehog Parody Comic

From the dark to the absurd (or, occasionally darkly absurd). Not Enough Rings is the second successful project from Veronica Vera (the first one is a very sweet anthro series about “high school, heartbreak, and cats.” Not Enough Rings takes an absurd look at the weirdness of the Sonic: The Hedgehog universe, dissects it, and spreads it on a table for you, the reader, to enjoy the laughs. 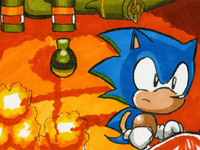 I’ll be honest, I’m not that well-versed in the Sonic universe, I only get one joke in five reading the webcomic. But the jokes–ridiculous killer architecture, demented mad science, and very, very disposable Tails the Fox–are easy on the eyes and good fun, even for a non-fan. The art’s a little quick-and-dirty, not as polished as the artists’ main project, Bittersweet Candy Bowl, but well worth the chuckle. And the Kickstarter’s already at double the original goal–the stretch goals are starting to kick in, so with 12 days left, check the project out!

The Howl of the Dead (Ends: 7/12/2013)
The outlines are your basic zombie apocalypse novel–asteroid strikes earth, things turn cannibal. But this one’s zombie dogs, which is worth bonus points. And, great title.

The Great Safari Adventure Show (Ends: 7/13/2013)
A costumed, musical Las Vegas family production, with lots of chances for kids to get up and move. Plot: Child lost in Africa, finds magic talisman that transforms the local animals into exercise-obsessed mentors.
This would have been benefited by MORE exposure to the fandom, working through some anthro issues. Heart’s in the right place though!

The Digger Omnibus (Ends: 7/10/2013)
A dark fantasy graphic novel. Digger the wombat inadvertently digs her way into an underground world of hyenas, gods, and strange powers. A kickstarter for a bound edition of the original six-graphic novel series.
Great stretch goals and bonus items on this well-organized kickstarter!

Antarctic Press: Keeping it Cold in the Antarctic (Ends: 7/15/2013)
An ask from Antarctic Press to help restore their financial balance after some mass-distribution experiments and other financial challenges.
Before there was the Internet fandom there was Antarctic Press, makers of Albedo Anthropormorphics, Furrlough, Shanda the Panda…See also Radio Comix, who took on the furry mantle.

SOLO Cannibal World (Ends: 7/13/2013)
One rat’s war in a post-apocalyptic word. This isn’t Redwall. Check the artist’s blog (it’s in Italian) for more art and world.
This must be the buffest rodent ever. Now I have to learn Italian.

Three Dog Night: Animated Film (Ends: 7/15/2013)
A group of revolutionaries–Wolf, Coyote, and Fox–set out to liberate the chained cats and dogs and start a pet revolution.

The Royal Dogs Playing Cards (Ends: 7/12/2013)
All pugs, all the time. Or at least all your card game. Whimsical, horrible little pugs in a Bicycle card deck.

Fleish & Cherry in Crazy Hotel (Ends: 7/11/2013)
An isomorphic period adventure game and puzzler set in a 1930s wacky black and white cartoon. Lots of anthro characters and dancing furniture!
It’s a neat role-reversal to have the damsel save her boyfriend, but unfortunately for fox-lovers, you have to play the human :( Maybe there’ll be a fan-mod someday.

BEEF (Ends: 7/14/2013)
Now YOU play a sentient, walking mutant cow! Try to escape Meatjoy the Butcher and his abattoir of doom in this first-person survival horror/humor game.
…weirdly atmospheric.

A Petgirl’s Story (Offbeatr voting period)
Petplay meets the children’s book format in a VERY adult and yet charmingly innocent story of a catgirl and her owner.
Okay, “charmingly innocent” is a stretch. Half the illustrations are online already. NSFW seriously. There’s a leather dogboy for canine fans.

Rat Realm: A Virtual Rat Sim (Ends: 7/16/2013): A virtual rat pet sim in development. I want to love this project but there is NO information available on it :(
“Meet the Mascots!” Animation (Ends: 8/18/2013): Relaunch of the “Mascots” project, teen angst with anthro sports mascots. No change to business plan, which already failed once…

Eeveelution Charms! (Ends: 7/15/2013): For the pokemon fans: A series of eevees in phone charms and tags by Peekingboo.
Undertale (Ends: 7/24/2013): A completely charming old-school RPG with a few cute anthro characters and a few good jokes. With art by Tuyoki.
Charcade: Burning Man 2013 (Ends: 7/28/2013): I wasn’t going to mention this totally-on-fire arcade in the desert, but…”Beat Beat Immolation,” guys.
Otakuware: T-Shirts for People who Love Snark (Ends: 7/29/2013): Anime and related fandom T-shirts. Add to your mildly ironic tee collection :)