There’s always a brisk trade in graphic novels and webcomics in crowdfundingspace, all exciting, stuffed with [pick one: A) magic, B) warm slice-of-life tableaux, C) foxes]. I didn’t want these two gems to slip by without at least a quick glance, they’re all neat projects and well worth a little tour!

So two mini-reviews: The Oswald Chronicles, the tales of a magical mouse; and Hounds of Love, a poodle-infested slice of life from Toronto by Julian Bynoe. 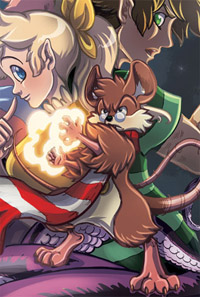 Part two of the ongoing stories of Oswald, a gentleman mouse possessed of magical abilities and an unfortunately adventure-prone, and mystery-fraught, life. Much of this mouse’s history is a mystery to him, where he came from, where he learned to communicate, where–and this is important–he picked up a knack for runic sorcery. But he’s ready to face adventure and inconvenience with curiosity and good manners. And a cute little bow tie.

There are other characters in this webcomic, but they aren’t adorable mice, so we won’t be discussing them, save to say they’re assorted and fey.

Volume 1 is available on Kindle, or as a perk at the $35 pledge level in the Volume 2 kickstarter. Of course, you can get caught up online, but the website is a bit clunky, so…seriously consider that pledge level!

Vol. 2 is a three-story anthology, with a range of artists, author J.D. Calderon, of course, who’s been working in comics for 20+ years, and works with his wife Daphne Lage on another ongoing joint project, Tall Tails. The third story in Oswald II is a prose piece illustrated by Lage, who has no shortage of furry cred of her own–Lage has been in and out of the furry fandom since the early 90s, and was featured in the 1993 American Journal of Anthropomorphics, a book which introduced me to the fandom (and, oddly, to my mate, but that’s a longer story).  Other artists in Oswald II include Luigito Teurel and Jade Gonzalez.

The Kickstarter for Oswald II is packed with awesome sample pages, with nods to anime, 1970s fantasy illustration, and some of the oldest school furry art around, and well worth a look!

We’ve seen Julian Bynoe’s work before; he runs an absolutely crazy number of ongoing stories, variously anthropomorphic and less so, from his “Snowleopard Arts” website,  he launched a campaign for a fun, gently picassoesque art portfolio and comic “The Blanche Carte Project,” and did an adorable illustration for one of our December posts. 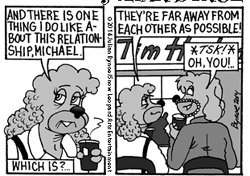 Bynoe’s particular slice of life is two canines, occasionally happily in love, more often tangled in circumstances (but still in love), and their cast of assorted characters, inconveniences, and exes. Bynoe’s artwork is light and friendly, very much in the “indie comix” mode. His characters are simply drawn, expressive and warm. The kickstarter’s funding for a 100-page B&W bound volume of Hounds of Love, collected from its occasional webcomic runs and biweekly appearances in community papers in Toronto. 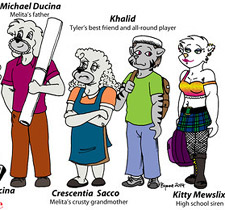 It’s a sweet and frothy series, with a good story and a fun romance. It’s off to a slow start, but don’t be afraid of the Canadian Kickstarter–Visa and Mastercard dispense Canadian dollars as easily as US.