Just a short callout for an adorable project, with children’s books it’s easy to write a post that’s longer than the book itself. So keeping it brief.

The Grumpy Unicorn is a story of a young unicorn in a school for with a bunch of other mythologicals–monsters much more fearsome and cool than himself. In a world filled with fangy dragons and horrible minotaurs and a griffon with stupendously huge claws–okay, the gorgon is pretty cute and chibi, but by and large, the unicorn is a bright mote of sparkly and fluff in a terrible, gloomy place–even the art in his home is a dreary and oppressive, and magical unicorns stand out like cupcake sprinkles on a badly-cooked piece of trout. 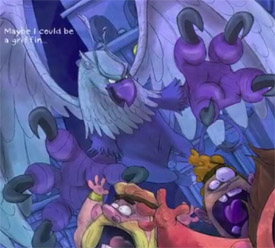 Much of the book is the unicorn thinking about all the things that would be preferable to being a unicorn–a scary griffon, a dragon, and so on. No surprise, but at some point the unicorn realizes it’s pretty nice being a unicorn.

I don’t know that furries would come out with the same lesson–I think we’d generally say “Yes! It’d be pretty cool to be a unicorn!” Though that’s probably what most five-year-olds would think, we furries are usually on the same wavelength as preschoolers when it comes to cute things. 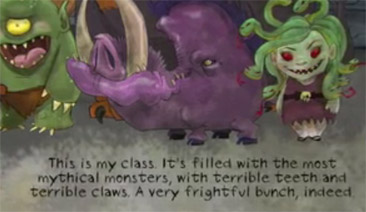 The art in this one is lots of fun–the unicorn is appealingly pissed, his dark and angry eyes and sour expression a great foil to his rainbows and particle effects. The rest of the world? It’s actually not quite as convincing, though there are some cute critters here and there (Cerberus tormenting a tennis ball…) We don’t have a lot to go on, just a few pages of art, but there is a sort of sameness to artist Jen Hodge’s unicorn that makes the unicorn stand out in the crowd. The rest is kind of like what would happen if Michel Gagne’s weird shadow creatures discovered color and 3D rendering.

I’d love to find out more about Hodge and her work, but my google fu is failing me!

Like I said, just a short little snapshot of a fun children’s project! 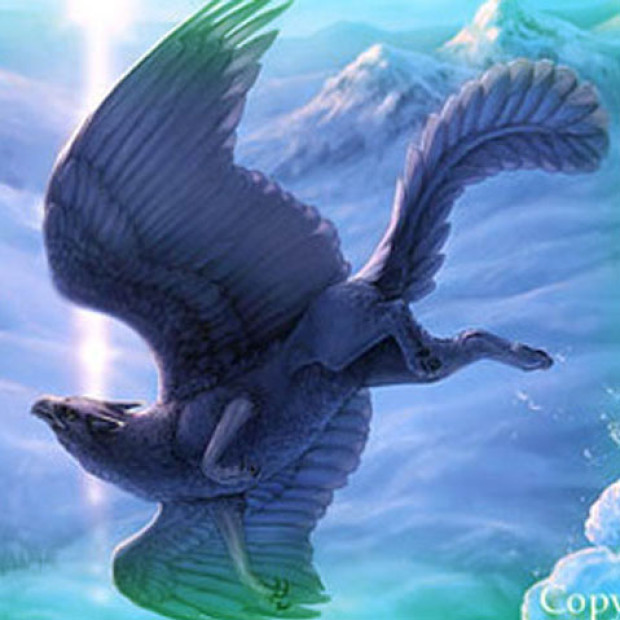 A gryfon's journey to his home and into prophecy... A Shard of Sun Kickstarter ending 12/16/14 It’s been a long time since I’ve had the chance to cover a really solid book. Thinking about it, I’m not sure I have yet, so this is a welcome project. A Shard of Sun, now on Kickstarter...