A gryfon’s journey to his home and into prophecy…

A Shard of Sun

It’s been a long time since I’ve had the chance to cover a really solid book. Thinking about it, I’m not sure I have yet, so this is a welcome project.

A Shard of Sun, now on Kickstarter, latest novel by Jess Owen (also on DeviantArt as ElementalJess,) is a story of Shard, a young gryphon—ah, gryfon—who, exiled from his home, finds strange allies (and strange enemies) in the far-away homeland of his tribe. It’s in part a coming-of-age story, the bildungsroman—oh my dog, the spellchecker corrected my spelling on that word—of a feathered hunter and just possibly a future king. It’s the unfolding of a prophecy, and a war between cultures. Cover art is by the talented dragonist Nambroth, though Jess herself is pretty good with a stylus.

Now, this is the third book in a series, so it’s worth taking a moment to look at the story so far. Here there be minor spoilers, but these are mostly back-of-the-book type blurbs from Amazon, so they aren’t the most spoilery of spoilers, and forgive me for being reductionist–if you’re interested, I’m linking the illustrations to the Amazon book pages, so you can blurb to your heart’s content there.  Anyway skip ahead a bit if you wish…

Song of the Summer King is a coming-of-age novel, first in the “Summer King Chronicles.” Shard the Gryfon is old enough to participate in the hunting and fighting of the older…pride? Flock? Someone throw me a collective plural, please. He befriends a she-wolf,  a race usually hostile to the gryfons. Threatened by the younger male’s growing strength, the red king of the gryfons declares war on Shard’s allies. As lines are drawn, Shard must choose—fight beside his king, or against his own kind?

The general tone of the reviews of this book are positive–it’s an immersive world, a great romp from the hunter’s perspective. One reviewer said that the experience reminded her of Avatar, the sort of rich world you can get lost in. I leave that as an exercise to the reader, sufficed to say world-building is a strong point in this series. Amazingly, Song of the Summer King walked away from Amazon without any reviews under three stars, after over 100 reviews–I didn’t know that was even possible!

Skyfire, the second book, begins with Shard as a gryfon in exile, tryingto make sense of his past, of a packflocktribe lead by an unjust king. He learns of the legend of the Summer King, who is destined to bring peace and balance—

Okay, editorial insertion here, I’ve read my Golden Bough, I know a bit about the pagan tradition of the Summer King—what I know about the Summer King is it’s a great gig, but you do not want to be him in the winter. I’m curious to see how that plays out, and the ultimate cost of Shard’s quest for peace and balance.

Anyway, his quest takes him across the sea to the gryfon’s homeland, and to two generations of unresolved family hostility. Which takes us to Book the third. 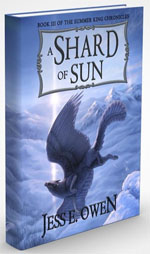 A Shard of Sun picks up with Shard as the proud caretaker of a young dragon, putting him in a conflict between his own potential destiny in the quest for the mantle of the Summer King. He begins a journey to return the dragon to its family, a journey that wins him only the mistrust of the dragons. Meanwhile, in Shard’s homeland, his wingbrother looks to find Shard and reconcile some old differences, and the Red King is hunted by the warrior, Caj…Basically, just never leave home, it only leads to grief. Word to the wise.

Book 4: To be announced, but I’m pretty sure it’ll be about gryfons.

There’s a lot that’s remarkable about this series, really, zarking amazing. Bearing in mind that Song of the Summer King was a first novel, the comments on Amazon for book 1 and 2 have been quite positive, no reviews under three stars. I’m stunned, I didn’t believe that was possible in this cynical world. The first two books in the series were both successfully crowdfunded, and with almost a month left on the clock it looks like A Shard of Sun will be three for three–three projects launched, three successes. Again, remarkable. 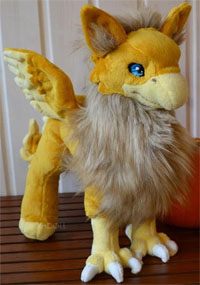 I almost feel tacky for criticizing a successful Kickstarter dynasty, but what the heck, it’s what I’m paid for (I’m not paid for it, I just get itchy if I’m too positive.) The business plan is very concise and well-stated, the rewards are exactly what I would hope for–an ebook or the ebook three-book collection at a shopping cart price, the standard hardbound price level, and some nice swag at even the low levels–an attractive gryfon pin, and adorable plush which, sadly, seems to have been one of the first things to go (it’s still available, but at a price point that’s really for the die-hard fans now–unfortunate, but that’s rather the nature of these one-of-a-kind items.)

The stretch goals are pretty logical, too–mostly focusing on audio book adaptations, a very reasonable thing to aim for, particularly if her project’s response grows to the same degree that book 2 did, compared to book 1. The higher stretch goals don’t actually meaningfully add to book 3, they reach back into the series to add voice to books 1 and 2. Good idea, one of the dangers of the cult of the stretch goal is increasing the cost of your primary product.

But I must raise a small voice of protest, and this is just me, really. Backstory, I have kickstarter diabetes. The doctor first brought it to my attention when tests showed that I was pre-kickstarter-diabetic after I reviewed the kid’s programming primer, Foxy For(). It got MUCH worse when I covered the peffacrumlush and zataculous world of–hang on, I need to take my shot–Matlock the Hare. The writing style on this kickstarter story is chirpy and friendly and conversational and almost sent me for my insulin, but…not quite. Jess’s style isn’t exactly business school, but it’s to the point and expressive, and fits the “young adult/fun-loving adult” tone of the campaign. Still, I’d worry that the chatty tone of the Kickstarter might be reflected in the book itself–I’ve read the demo chapter, so it’s not really a big concern, and clearly the campaign is on a positive upward trend! But if I’m a fan of high fantasy, the chirpy tone of the kickstarter might strike a weird note for me on a cold read.

Not, like I said, a huge criticism, mostly a stylistic opinion from a grumpy old dog. It’s a little late to get in on the ground floor of Shard and his world, but check the kickstarter for Shard of the Sun and catch a wing to where his journey next goes!

The illustrations used in this post are intended to promote the creators’ work. Please do not reuse.