When the world seems lost and mankind stands at the eve of destruction, the Gods give them…furries…

The Black Paw: Return of the Dragon 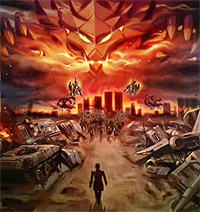 The world as we know it has run its course. Humanity’s last gasp is the war–well, the first war, against Tiamat, a godlike force from beyond that brings with it giant city-destroying robots and complete devastation. When weapons fail, humanity turns to the gods, who answer in the form battle machines powered by holy energy: the Divine Golems. 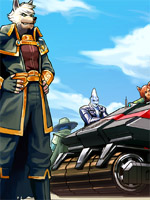 And that is 250,000 years ago. Now, in a world shaped by strange magic, stranger technology, and divine will, animal folk inhabit a green and vibrant world. But that “green and vibrant” part once again attracts the attentions of Tiamat. With the looming threat of a second war, mortal power struggles–assassinations, political rivalries, court dramas–unfold–but will the people of this world get their mutual acts together in time to stave off destruction for another 250,000 years?

This is the scenario that plays out in Black Paw 1: Return of the Dragon, now kickstarting for a paperback release.

The world of Black Paw is a genre-blender mix of high tech and magic. It’s mecha-intensive; one of the principal artists launched the “Mecha Zone” kickstarter in 2011, and the world, with its god-powered golems and technodragon dark lords, is informed by both battle-robot anime and Kaiju. And there’s a fair bit of high fantasy as well–the military wades in with swords and axes, kitsune girls wield spiked fans, characters quest through the Astral Plane and heal through divine blessings. It’s a huge world, a complex world, and an ambitious world.

One thing that’s compelling for me about this project is that it’s total fandom service. You can see a few pages of the comic on the developer GleamingScythe’s FA page, it’s reasonably solid art. The characters are sometimes full-on half-animal anthros with muzzles and tails, sometimes more in the “cat girl” style of a few spare anthro features. One or two even have a strong cartoon vibe, almost superdeformed. The range is striking.

That being said, the Kickstarter itself is confusing, even incomprehensible. The project page comes across as a massive collection of images, not really meaningfully related to each other–motion videos of mecha, character sketches and high-quality pieces from artists that don’t seem to have anything to do with the project, commission opportunities from artists who, again, are from some other project entirely. The project’s description leads with not a write-up of the book, but a narrative of the tabletop role-playing game that led up to it (and it does feel like an RPG setting, kind of like Kickstarter darling Numenera), and about the project’s previous financial history. And it never becomes clearer, though there are a lot of nice pics. 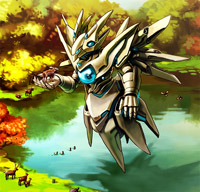 Overall the experience of reading through the project is the informational equivalent of trying to operate one of those new touch-screen soda fountains with your eyes closed. Is this the rules to a tabletop game? Should I pledge here or go to Paypal? Am I supporting a film project or a book? Does the pretty naked person appear in the book, and will she look like that? Are there Kaiju? Can I play the gun-toting dingo in the base game? Am I getting this now, later, or only if I pay $1250? Help! 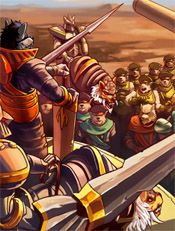 One place where the project’s Kickstarter page seems to be genuinely misleading, and maybe unintentionally since the page is terribly rambly, is on the issue of art. The general quality of the art (again, you can make up your own mind on Furaffinity) varies between “wow, that’s amazing!” and “eh, good enough for webcomic, I’ll bookmark it,” and it looks like the majority of the final product is the latter. In fairness, fandom-focused comics tend to fall into that category, most of us aren’t professionals, but a LOT of us are still creators, and that’s great! But in the context of a business proposal–and ultimately, that’s what a Kickstarter project is–it’d be good to know what you’re buying.