The Meek Shall Inherit a Sequel: Sand and Shadows

After 20 years, a return to the post-apocalyptic/medieval world of “Inherit the Earth: Quest for the Orb”…

Inherit the Earth: Sand and Shadows 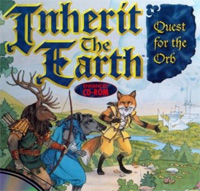 The year is 1994, and computer graphics are what you’d expect them to be. “Dark Stalkers” spawns a few years of well-justified John Talbain/Galon rule 34, Sonic meets Tails, and things were kind of pixellated and grainy, but we didn’t know any better. Enter “Inherit the Earth: Quest for the Orb.”

The time: the unknowable future. Humanity is a thing of the past, having, according to Wiki, wiped itself out with a biological weapon. However many years later, Earth’s animals have established a medieval society in the wreckage, and humans are something of a myth, even a religion.

If you haven’t followed the original game, you might want to skim over the webcomic, which expands on and recaps the plot of the game and world. The game’s available online or (I think?) on portable devices, clever people can find a copy somewhere, and a trial version is available on the Kickstarter.  The story runs something like, “Rif, a fox, goes to the Big City (well, plot-centric village) to compete in a puzzle contest, but when the Orb of Storms–an old human techno-relic–is stolen, he’s accused, and goes on a quest to find the relic and its thief.” Oh, the puzzles that will be solved. 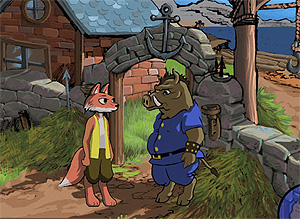 That was some years ago, and rumors are surfacing about the original orb surviving, and a terrible drought that is almost certainly tied to the orb’s weather-related functions. Rif sets out on another journey, this time with MUCH smoother graphics and a wider world.

At its heart, Inherit the Earth: Sand And Shadows is the child of its ancestor: a point-and-click  game, lots of dialog and conversation, lots of puzzles. The original game was set up for a sequel, maybe even a trilogy–what happened to the orb? Where are the humans?–and left on something of an open “The End…Or Is It?” note. So hopefully Sand and Shadows will answer a lot of questions.

The Kickstarter project itself? It’s strong. The pledge points are everything you’d hope for from a video game launch that’s targeting an established fan base. At low levels, some good swag–posters, a reasonably affordable “your character here” in the game as a background element ($600, a good price for this sort of thing, from what I’ve seen), with appropriately saliva-inducing bells at the high end: a speaking role in the game, attending the game’s launch party with travel expenses (!), and other good stuff. The stretchgoals are textbook, but in a good way: mobile device support, extra cut scenes, extra languages (I’d personally want that Android support at a lower level–or even as the starting point, the look and feel of the game really lends itself to portable devices.) 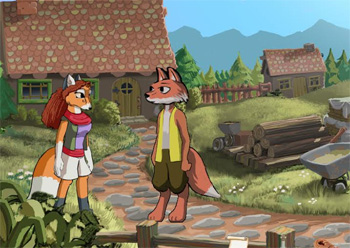 Criticism? I don’t really have any major ones. From an uneducated non-programmer perspective, as I said, I think the game lends itself well to portable devices, and that might be a better starting point, but I’m not remotely qualified to say whether that’s actually a good idea or not. One point made of the original game that may still be true, is that it has some very adult ideas and a “ages 11 and up” target audience, which may not be a viable audience range (particularly with the way anthro subject matter draws the target age downward, at least to the non-furry audience member.)

That, and the goal is going to be a challenge, and a long road. Games can meet the “crowdfunding for the actual cost of the game” goal, Armello managed it, but they had a strong launch campaign and seemed to capture a lot of audiences at once–board gaming convention goers, the greater video game community, and probably some furries as well. With Inherit it seems like their primary ask is to their existing fanbase, and that’s not going to bring in the money to hit that high, $160K goal.

Regardless! If you want to see this project succeed, it’s going to need retweets and reposts. Consider leaving a comment on their main page–that sort of thing helps the project look stronger on Kickstarter’s analytical engine. Talk it up–on the kickstarter page, and on your own social media–conversation goes a long way toward keeping the project viable through the full campaign.