Ironclaw Adventures: *BE* The Weasel

Ironclaw: The Book of Adventures 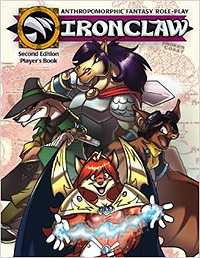 Ironclaw, by Sanguine Games, is arguably the best-known Pen & Paper RPG (shared fantasy role-playing around a tabletop, like Dungeons & Dragons). It’s not the only furry P&P RPG one that’s had some sticking power–Albedo Anthropomorphics,a sci-fi RPG based on furry founding father Steve Gallaci‘s work, also spun off supplements and multiple editions (and is also, at this point, one of Sanguine’s games). It may not be the first, or the most successful (both of those honors–at least the former–likely go to Palladium’s 1985 “Teenage Mutant Ninja Turtles & Other Strangeness,” probably a success because of profound “right place right time” syndrome.) But so far as well-realized, well-supported, still-expanding, still-produced furry RPGs go, look no further.

Ironclaw is many furries’ introduction to P&P RPG. It’s a renaissance fantasy; the  island/continent of Calabria is a toy four great noble houses struggle over (the game book says Calabria is the “crossroad of the known world.” I figure it’s like Australia in “RISK,” whoever gets it wins the game.) Some small number of the inhabitants of this world can throw magic around, but with the growth of new technologies, the power of the church and the four noble houses, the fantasy RPG staples of magic and monsters could almost fade into the background–Renaissance Europe is complicated and deadly enough without fireballs!

Oh, hey, there’s an online version too, I did not know that.

So far as expansions go, Sanguine recently launched a Kickstarter to bring their Asian “Jadeclaw” game up to date with their new rule edition, a version with a streamlined combat system, cleaner magic system, much-abbreviated skill list (overall, the game seems to have taken several big steps away from an unnecessarily rules-crunchy “spells & simulationism” game to a cleaner, combat-light storytelling game, which is probably a better place to be and more inline with the mainstream P&P RPG hobbistry. Overall, the new revision has been expanding at a modest pace, with the Asia-themed Book of Jade and the virtually contractually-required magical supplement expanding campaign options.

Sanguine Games’ newest Kickstarter, the Book of Adventures, expands the universe with classic and new Ironclaw mini-modules and story hooks. 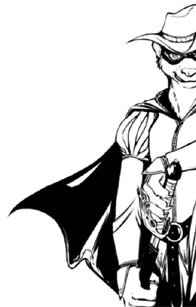 With the indie RPG industry moving to online/print-on-demand and crowdfunded launches as publishing models, Sanguine Games is well-placed–furries are, by and large, young and tech-savvy, and Ironclaw’s status as the preeminent furry RPG is a powerful asset for bootstrapping a small-press product. Indie RPGs seem to be trending toward a post-print economy, which might hurt a large company that makes its money from brick-and-mortar stores, but the Fandom has the resources and enthusiasm to sustain a primarily digital model. Anyway, the product! Six “Ironclaw” adventures, fleshed out with side-quests, characters, and storylines. Not sure of the page count (ahem, Sanguine?), but given the size of their original adventure modules (pocket-sized trade paperbacks with 60 or so pages), I think we could imagine a solid 180-page book.

Right now, “Adventures” features: a bleak game of war with “The Wolves of Winter”; luxury and pomp at the opera with “Wages of Envy”; noble intrigue with “Lost Heir of the Rinaldi”; uncovering the grim past with “Martyr of the Catacombs”; a journey into the untamed, savage (?) land of Phelan; A story of loyalty and the church in “Crisis of Faith”—and that’s the product as currently planned. Scanning over the stretch goals, another two adventures are in easy reach at the $3000 and $7000 goal, and if the Kickstarter reaches $18,000—possible with its loyal fan base, the book will be more than half again bigger, with at least four new adventures, and expanded art and content besides. Besides being, well, a solid collection of modules that might be helpful for an established Ironclaw campaign, pre-published adventures help realize the game world; they show how Ironclaw plays out in the minds of its creator, filling in the world, suggesting ways to play and expand your game, and generally taking the game master’s paw and saying “Someday, cub, all this will be yours.” Helpful stuff. 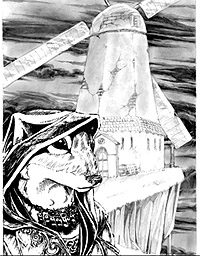 As to the Kickstarter itself…hmm. It doesn’t really put on its best Sunday suit. The video is about a minute long, loaded with art, and nothing else, and the text description is, well, text, and nothing else. Given that most potential investors are going to glance over the campaign page for highlights and move on, this isn’t the best sales approach. And while the campaign is at double their original, probably somewhat understated, goal, there hasn’t been an update posted, and very few comments–and none at all from Sanguine itself. This is not a good way to build interest or community within the Kickstarter toolset, and the world hasn’t been exactly buzzing about it outside of the standard P&P RPG internal boards. So…we’ll see, but without some push from Sanguine, that $18K goal seems pretty distant on the horizon.