A horse has to follow his dreams, no matter how strange…

Believe it or not, this project is sorta-kinda based on a true story. 90’s hip-hop star MC Hammer did, in fact, have a racehorse named Dance Floor. Whether or not his son, Le Boss, wanted to become a rapper is a matter of some conjecture, horses not being very talky. But if Dance Floor did sire a colt, and that colt was named Le Boss, and wanted to become a rapper, and indeed could rap, and perhaps had met the acquaintance of DJ/Producer/Jockey Carter, this would almost certainly be his story. 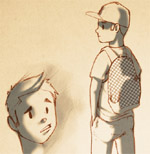 Episode one–what the Kickstarter’s focused on–is a simple enough story. Boy wants to be a producer and DJ. Boy meets horse, who wants to be a rapper. Horse meets alien, who also wants horse to be a rapper. I’m actually a little unclear on how the alien fits into this, except as a benevolent musica est machina to show the horse his true destiny. The two train during the day, work through the night, and if there isn’t a montage here somewhere we are missing a golden opportunity. How does it end? Not a clue, this is just the first part of what might, if the pennies come from the clouds, become a series. 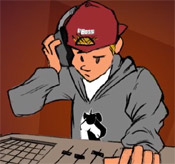 Pros and cons: overall, the project has a slick look, more polished than a lot of the indy animation floating around Kickstarter, and the main character, Le Boss, looks like a well-realized fellow. It’s a strong elevator pitch and a clear story (except for the alien, I’m still working on that one). And he looks pretty good on the merch, star and mascot at the same time. Cons: while producer Sean Sylvester has a stable (heh) of animators to work with and a bit of star power, he’s a newcomer himself, and the project might at this point be overly optimistic. The goal of $25K is much lower than other animation projects of comparable length, and with a wide variety of really great merchandise including the DVD, I’m concerned that merch + fulfillment might tear through that modest war chest.. Sylvester may have some deep pockets to supplement this goal, but the kickstarter page doesn’t discuss his business plan.

That being said, I really want this one to succeed! Le Boss is a real charmer, and this is a horse that needs his 15 minutes of fame.