Webcomics: It Came from Patreon

Illustration by Not-Fun, whose webcomic “Inhuman” is currently crowdfunding on Patreon. Thank you, Icarus!!

Greetings from Patreon! Land of trickle-funding and micropayments, where full digital art spreads bring in $3 and pony videos $550…if you have a nice British accent.

Joking aside, Patreon is proving to be a go-to source for content providers, a low-key and low-pressure fundraising tool for artists, who as a category seem to err on the side of low key and low pressure–fundraising without stress (and, frequently, without any sort of campaign, but let’s not go there just now.) It’s a good home for webcomics in particular, where ongoing plots and slow-growing fan bases can turn into a gentle stream of pennies. Here’s a few recent gems. 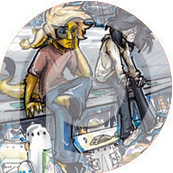 Inhuman by Icarus/Not-Fun
Patreon
“It’s about aliens and schizophrenics. You should read it!” – Not-fun

Icarus’s “Inhuman” is an elegant sci-fi world, a slow-building story in the distant future, with expressive humans and a wide range of aliens (the four-legged polar bear taur-esque Nikitak may be some sort of Progenitor experiment in weaponized cute).

It’s been running for over a decade now, rolling out a tale of exploration and identity against the backdrop of a powerful religious state spreading its tendrils across the planets. It’s a mature and thoughtful web series, and while it’s thick with damnably adorable critters, Inhuman is, at heart, a story of what it means to be human. 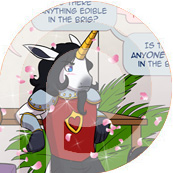 Anthronauts by NixieSeal
Patreon
“…science fiction with both humor and horror, drama and adventure, and romance and redshirts getting eaten by space monsters.” – NixieSeal

On the other end of the “whimsical sci-fi romp” continuum, Anthronauts, a weeklyish webcomic, a bit sci-fi and a bit space-fantasy running a bit over a year, is a silly, Anime-inspired romp through furryspace, I’m still working my way through the series, but we’ve come across a few characters, somewhat “stock” but well-used–the bishonen unicorn captain (or space knight?), 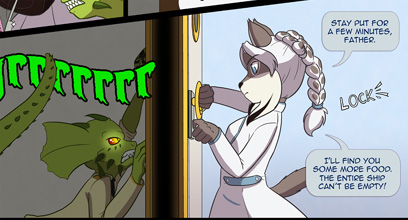 bookish and dedicated scientist. Unfortunately flipping through the comic is a bit of a trick, the web interface is just a bit buggy, but NixieSeal’s world is cheerfully perverse.

Page one: “Father, you look unwell. As much as I enjoy slicing your limbs off, I’m starting to worry about your health.” It gets weirder from there.

Interesting, I thought “Poppy” was a down-to-earth story about a swamp possum trying to survive the challenges of being a single mom and living, well, in a swamp. As it turns out, there’s a little bit of sci-fi in this one too, since Poppy’s on another planet, “Flora,” which is a bit of a hellhole (though the Fenneclands there sound supercute.) There’s touches of magic and fantasy in the series, but it’s still, at heart, a mom and her daughter against the world. 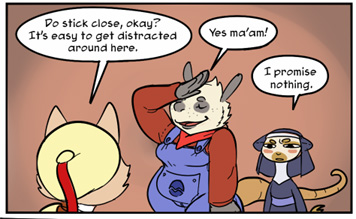 Yeah, it’s a world with perverse and dotty cat-nuns and such. I do like the way the fantastic elements take a back seat to character development and loving mayhem. They’re there, lurking in the background–and Poppy herself seems to be the only nonmagical character in the series, with a certain increased mortality because of it. She’s an outsider, a charming brute in a somewhat fussier world, maybe a little more at home wrestling an alligator than dealing with tea and fine dresses, but Poppy’s a winning character throughout.