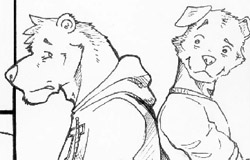 Webcomic: GLBT slice of life from the maker of “Fur-Piled”

Cartoonist Arthur Husky has a long history of well-drawn furry webcomics; gay slice-of-life “Fur-Piled” ran from 2007-2010 and won an Ursa Major award (more about it on wikifur), and has been collected and produced in graphic novel form through Sofawolf Press. His newest comic venture, Perception, seems to start out as a coming-out story, beginning with the main character’s difficult first steps of coming out to himself.

Perception doesn’t seem to have any strong webpresence yet, though there’s teasers on FA and a substantial number of members-only posts on Arthur Husky’s Patreon campaign. One of his stated Patreon goals is to set up a new hosting site for both Perception and Fur-Piled, so maybe that’ll be available to the general public soon.