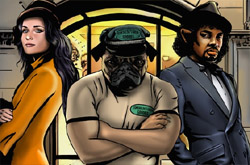 Lars, Lunchbox, and The Quasmo D: Rise of the Dark Wraith

I’m not going to lie, this kickstarter  is going to crash like the stock market in 2008. James Fusco “Boris Beldarian”‘s other project (a mobile basketball training device) ended with an amazing $0.00 pledged. So, what I’m saying is….go look over his page, because you’re not going to find “Lars, Lunchbox, and The Quasmo D” in stores, and it is worth a look. 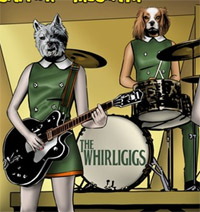 LL&QD is a graphic novel set in Washington, DC, in 1964. Now, that was an exciting year, which has lots of parallels here–The Beatles broke out in the United States, which we get a little taste of in the LL&QD universe with all-canine girl group, “The Whirligigs.” Boxer Muhammad Ali makes his name, the Viet Nam war is in full swing, and the space race with Russia and the threat of nuclear war is in full gear, ratcheting up the tensions that would linger through the Cold War.

There were also dog-headed people EVERYWHERE. This is documented in the textbooks, go back and take US history again if you don’t remember it.  Somewhere in this graphic novel the word “super-borzoi” crops up, making it that much more amazing.

The art–and there’s a lot of it here–is a riot of color, fight scenes, dog-people, Marvel Comics-esque Red Scare, super-borzoi in skin-tight suits (I would totally buy that poster), clean-cut guys in suits and fedoras.

Where the whole thing breaks down is in the presentation. When you launch your kickstarter, here are some things you should not do:

No, I mean that. If you’re a hideous mutant, get someone to draw a cute cartoon of you. Don’t appear exclusively–in every site you’re on, including your business pitch for a $750,000 piece of sports equipment–dressed in the Japanese equivalent of a luchador costume. There is no reason to do this. Srsly. Kickstarter is about building trust, not showing off your so-big sword. Just saying.

My time is valuable. Right this second I could be playing Binding of Isaac. Why are you listing every single character in your graphic novel to me? Particularly when I can scroll down and see them at my own pace? Isaac’s Mom isn’t just going to kill herself, you know.

I really have enjoyed the artwork on this project–retro action/cold war/noire/Beatles riffing is all good stuff. Two thumbs up. But the overall presentation dips into the absurdist. It seems like every character, including the fundraiser, has a super-awesome pseudonym. Most of the people I know are content with just one name–

Anyway, take a look at this one. There’s too much wrong with the delivery–God only knows what the text is like–to really be a safe investment, which is kind of a pity. It’s a neat vision, and might make a better concept art book than graphic novel.

Normally we are not this snarky…