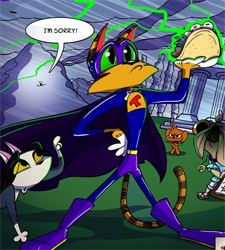 Before I begin this little review, I need to establish “Kricfalusian” as an adjective, because John Kricfalusi and his weird little monkeys, Ren and Stimpy, have left their greasy thumbprints over so much of modern cartooning, it’s hard to tell what’s his influence and what’s just particles in the 21st century atmosphere. It’s like asking a fish, “Hey, fish, what’s it like being in a constant state 2.3 ATM?” They just look at you and do that fish mouth thing.

Meet Taco. In at least one of his lifetimes–he has two, going on three, right now, so your Taco experience may vary. And like all webcomics the style evolves over time, one of those big inevitables of the genre. So, like I said, Meet Taco.  He’s your basic gangling, awkward slacker of a cat, content to hide in a room full of black light posters and lava lamps and avoid the hell out of the real world. 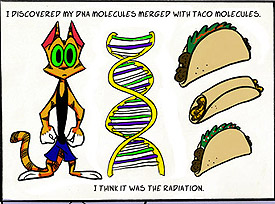 This is definitely science

At least, in at least one of his lives. Sometimes he’s a part-cat, part-taco crime-fighting machine, with “amazing” powers of tacogenesis at his disposal and a righteous thirst for both justice and Taco Bell’s “medium” sauce. Despite his best efforts, he does occasionally manage to save the day, though his biggest mutant power is “ability to overcome himself…barely.”

Either Taco is a reluctant hero–the first, a slacker whose passion for trying to find Sasquatch and chupacabra gets him dragged into a very weird world, the second, a slacker with really dubious powers who doesn’t want much more than to spontaneously manifest a good meal for a hungry passerby. His home life? Not so hot. In a world where cats and dogs barely get along, he’s a cat adopted and raised by dogs, not really at home on either side of the fence. 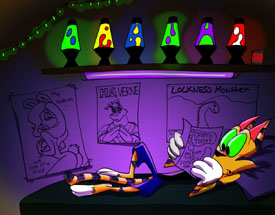 Like the classic Tex Avery cartoons (and their Krikfalusian grandchildren), Taco El Gato is a happy mix of quirky (or lovingly dumb) humor, hopeless characters, and the occasional T&A joke. They’re pretty cute, and the slacker jerk who just might make it in the world has a lot of appeal as a character.

Taco El Gato, and its creator, Candy Briones, are both funding over on Patreon, and it sounds like Taco is going to make a season three journey back to his non-hero self  to get a little deeper into both cryptozoology and catnip (with a few “Cheech and Chong” jokes in there, for good measure.)

For the most part, the rewards for Candilicous’s Patreon are what you’d expect–early access to the comic and sketchs, and some fun “behind the scenes” videos at the premium level. There’s an odd $100/month level–v-e-r-y rich, more appropriate to Kickstarter than Patreon, with a lot of fun stuff, but that feels a little like it should be rewards for a one-time gift, not a pledge of, say, $1000 a year or so. This may not be intentional.

One problem I’ve had wrapping my head around is the weirdly spread-out nature of Taco’s various projects and side projects. Since it’s a single ongoing series–I think–it’d be reasonably well-served by a single website, but the Taco Empire is vast, with content on Facebook, the original comic on SmackJeeves, the “Supers” comic on its own site, and the low-content splash page with different versions of the same comic with the comic buried several clicks deep (or just unavailable on that site)–the intellectual property’s spread pretty wide, and may need to be brought under one roof. Neither here nor there, just a thought.

Anyway! Taco El Gato’s a fun webcomic in the Harold and Kumar/Dude, Where’s My Car mold, with a bright, 90s-retro art style. It’s a fun universe(s) to poke around in, check it out and consider chipping into Candy’s art fund (maybe not at the $100 level, though :) )

Images used with permission of the artist for promotion only, please do not reuse. Follow @furstarter on twitter for the latest fur-friendly crowdfunding projects!