Strong Hands and Horns: The Clay that Woke

A steamy jungle strangling a civilization in vines and mystery, and nameless servants from an unknown past finding themselves…

The Clay that Woke: A Game About Minotaurs 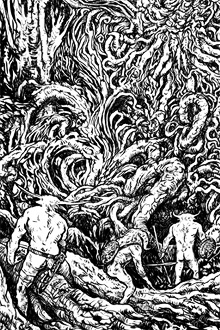 The Kickstarter era has done good things to indie tabletop role-playing games, and to quirky little fandoms in general. Back in the day, the only way you’d ever be able to get your paws on an obscure TRPG is if you happened to bump into the author at a convention, or lived in the city where the thing was produced. On the plus side, you wouldn’t ever hear about it, so no harm, no foul. Now, with crowdfunding and print-on-demand/PDF sales enabled, authors can get the finances for their obscure projects, consumers can catch a copy of the latest and weirdness for their ebook reader, and just maybe your local game store might even get a few copies from the first print run. Hey, it could happen.

I’m blessed to have a big, BIG game shop in town, and they have a shelf full of those little, dark, artsy, and terribly readable little games. I’m pretty sure I even saw Paul Czege’s popular and clever game, My Life With Master (“[a game of] villainy, self-loathing, and unrequited love”) on the shelves next to Engine Hearts. Any game that lets you play Igor and has “self-loathing” as a character sheet stat is a gem.

Anyway…on to the furry content. The Clay That Woke is, like the book says, a game about minotaurs, and a new take on them, inspired more by the monster in the labyrinth than World of Warcraft’s Taurens.

It’s hard to know where to begin–and what these little games do best is settings and ideas, which just makes it harder! Imagine an ancient stone city, Maybe Roman, maybe Mesopotamian, maybe Conan. There are philosophers, open markets, gladiators. Imagine that it’s lost in a dense and mysterious jungle, isolated and alone, trapped by the wilderness and the powers of an unknown past. 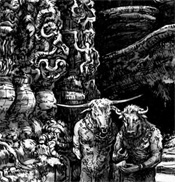 Imagine that you are a laborer here, a second-class beast of burden. You have no name, but you do have a profound sense of your mission, your purpose in life. Maybe someday you’ll have a name. For now, names are for humans. Your breed was lifted from the mud of the Eternal River some thousands of years ago…but for what purpose? To serve man? To find their past? Realize the destiny they feel inside them? Ultimately, that’s the player’s quest to uncover.

Reviews of CTW suggest a moody, claustrophobic world, a city on the margins of the wilderness, hemmed in by trees and its unknowable history. And evidence suggests that Czege does mood and tone quite well. These may not be the minotaurs you know, though they feel ancient and mythical in tone. It seems like you could tell the same story with golems or, well, name your slave underclass. But classically minotaurs come from an ancient past, a joke played by cruel gods, creatures of violence, but of puzzles, imprisonment, claustrophobic labyrinths, lost islands, too. Maybe they’re the perfect trope for a game of exploration and meaning in a tiny, isolated world.

I can’t judge the game play aspects, and most of these little games just end up on my shelves as bundles of ideas instead of on the game table anyway, but the core mechanic makes me nervous–a bundle of icons on tokens and a cleverly-named pot, with a table to compare to for a list of set resolutions. There’s a lot of clever here, players can choose icons to pick their preferred resolutions and game masters can sculpt the terms of the challenge. The icons themselves become scarce commodities on their own–suddenly you’re out of, say, “mind” or “strength” or “patience” and have to go and restore that asset somehow. A mechanic like this can do a lot, but a part of me sees “consult Table XX for your results” and flashes back to the bad old days of color-coded colums and “FASERIP” charts. Perhaps that’s unfair, but having to run to a chart is limiting and awkward, in my experience. 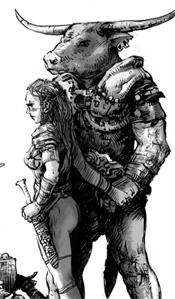 The Kickstarter itself–well, it’s hard to argue with success, after three days or so Czege’s fan base has shoved him over goal and into his stretch goal territory. The reward categories are reasonably cut and dried, but there’s a little “precious” here and there that makes me twitch (“A TRUTH: Backers at this level receive a truth that’s unique to them…” and the video, which clocks in at almost ten long minutes, has the strange vibe of a college professor talking to a five-year-old, it’s really off-putting. But Czege’s niche seems to be challenging and intellectual RPGs, and that’s not a place for the humble.

The product’s got strong art by Nate Marcel, a strong indie pedigree, I don’t doubt for an instant that Czege’s a skilled writer, and it’s a rich bundle of ideas. And as crowdfunding goes, the fans have spoken. Take a look.

(PS: Rarely in an elevator pitch video does a fundraiser send me running for the dictionary. “Frondice”?)