The Wild Wood, and beyond! Steam in the Willows

An illustrated version of a children’s classic, dedicated to makers and artisans everywhere.

Steam in the Willows

“The past was like a bad dream; the future was all happy holiday as I moved Southwards week by week…lingering as long as I dared, but always heeding the call!” – Kenneth Grahame, Wind in the Willows

Wind in the Willows, like “Robin Hood,” may be one of those stories that everyone knows, but very few people have read. Sufficed to say that it’s much adapted to film and stage, and might be one of the best-loved anthropomorphic titles around. 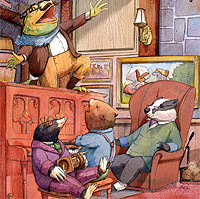 How to capture it?  WITW is a tale of a mole leaving his burrow and moving into the world, a pastoral journey down the river, rescuing a friend from the madness of fads and crazed consumerism, a fight for house and home, and redemption. It’s sepia-toned with friendship, a gentle reflection of an England, verdant and peaceful (even pagan) fading into memory, behind the wall of the Industrial Revolution. Written in 1908, just a few years before World War I wiped out literary innocence for the next 60 or 70 years, it might have been the last time an author could capture that peaceful, fading vision.

In so many ways, it’s a perfect fit for the modern Steampunk movement, with its loving look into the past, playful individuality, and da-nyet retrotechnophilia. Though it took Krista Brennan, illustrator for The Steampunk Bible, to make the connection (and launch the kickstarter). Steam in the Willows is a low-key sort of Steampunk. The original text of WITW is unchanged–as far as I know, the weasels don’t storm Toad Hall in lightning-throwing zeppelins. Half-blind mole has an elaborate pair of goggles, and there’s a bit of brass on Ratty’s fishing rod, but by and large, he’s still a rat, he’s still a mole. Mole and Badger do dress up a bit. So do the weasels.

Overall the project, the illustrations, and the Kickstarter page are more about the Maker mindset than the Steampunk aesthetic–artisanship, crafting, and skill over mass-produced, wasteful throw-away toys. In Brennan’s world, Mole and Badger in particular capture that Maker mindset–maybe a bit solitary, but they make their own tools and homes. Toad, on the other hand, spends his inheritance on fads and flings. In Brennan’s words,

My illustrations are a love-letter to all of these folk, an homage to the artisans, makers and Steampunks, everyone who crafts or bakes, brews or builds, who pulls apart and reimagines, chooses hand-crafted over mass-produced, who wants long-lasting and beautiful artifacts that can be handed down over generations. 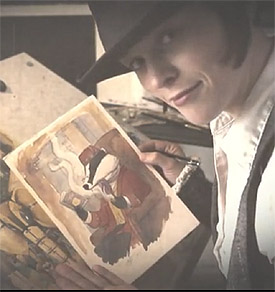 Brennan’s Kickstarter page is a lot of fun. The videos are quirky and retro, modeled after the 1930s newsreel style of journalism, and her awards are more along the lines of “I’ll write a poem about you!” than “and you get 10 copies plus a plush!” The color edition of the book is (perhaps unfortunately) pricey, but it is a limited-edition run. Also, bow-ties. Because it wouldn’t be Steampunk without at least ONE charmingly retro and non-functional accessory.