The Unlucky Fox (Or, The Peculiar Story of a Dapper Young Fox Out to Solve a Family Mystery in India) 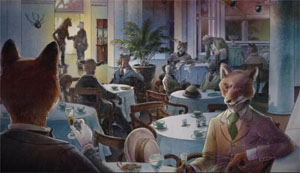 For me, this book hits all the right notes. Not only is the illustration work sterling–rich backgrounds, realistic characters, great clothes and action scenes–it’s a story set in a really amazing historical period, when Victorian England was an empire and trying to spread its rule and aesthetic over a vast territory. The strange juxtaposition of the most British of British periods and the so-very-different culture of India created so much amazing imagery, photographs, and cultural fallout, you could set any number of stories there. For a deep dive into the period, its artifacts, and…foxes…check the author Scott Plumbe’s Pintarest-style bloglett and be awash in the somewhat schizophrenic mindset of Eurocentricism in India circa 1890.

Or maybe you’re just here for the foxes. That’s okay too.

The Unlucky Fox, now on Kickstarter, is the story of Theodore, a dapper young vulpine returning to his family’s home in Calcutta, India, following a cryptic note from his uncle, hinting of family intrigue and secrets. From there, Theo’s life is a wash of danger and conspiracy as he and his uncles acquaintances are caught in a shadowy duel between the powerhouses of Czarist Russia and Victorian England.

If there aren’t cups and cups of assam tea to accompany this historical whodunit, I shall be most put out.

Want to learn more about the book? Of course check the Kickstarter out. You can also look over a sample chapter–no illustrations, unfortunately–and the cast of characters on the Unlucky Fox website. There’s no shortage of materials there, packed into the website with a dedication to the Victorain “stuffed foyer” aesthetic admirable in its historical accuracy.

The author’s illustration blog shows the range of Plumbe’s work, from commercial illustration to photorealistic portraits to rich cartography and character studies. I’d go directly to the illustrations for Aesop’s wolf fable, myself. A lot of these entries open up into mini-portfolios of their own.

Some of the “gimmes” for this kickstarter, besides the digital book, are really nice. Fans of Victoriana and vulpines alike will love Rosemary Bartram‘s sterling and gold fox cameo broach, with the book’s “fox and tea” logo (Dear Whines: please note, this is the expected and proper level of support for your mate’s Kickstarter project. Just saying.) And for a high but not unreachably so price, you can go to Plumbe’s studio in Canada and study up on Corel Painter and Photoshop with the artist himself.

An interesting choice on the part of the creator: nowhere, as far as I know, is the Unlucky Fox physical book itself available as a reward. That’s an interesting choice. I could easily be wrong on this, but it seems like the Kickstarter’s physical reward is an art and inspiration book, not the illustrated novel. The main reward is digital, a serial installment of the book on a monthlyish basis (which itself is wonderfully Victorian, most of Dickens’s novels were released as newspaper serials.) I may be wrong on this, I could be reading the rewards too literally. A little bit of clarification on the rewards might be useful.

Unfortunately, the Kickstarter seems to be having a slow start, it’s been running for a few days yet and hasn’t reached 10% of goal, which is ensaddening. I’d love to see this one succeed, it’s an elegant product and a rich addition to fox lit.

PS: The Kickstarter video starts a bit slow, but at 1:10 or so it kicks into dynamic typography, stopmotion animation, and a neat scruffcore design with a Victorian edge. So feel free to skip ahead if you’ve read this far already…