A trio of virtual narratives funded using the Patreon platform…

After a reader tipped me off to three virtual novels with sci-fi themes and strong furry interest being funded through Patreon,  I thought “Well, that’s a story right there!” But it looks like the bigger story is HTBH Games, the company producing (in the Hollywood sense of “producer”) the three titles. I hope to learn more about HTBH over the next few days. But in the meantime, projects! 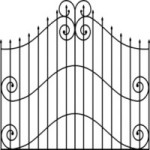 It’s hard not to project onto Blackgate. The “small town gone dark and strange” trope is one of my favorites. It’s the Bad Place of the haunted house film, but spread all over a wedge of Americana. The driving energy behind Wicker Man, Invasion of the Body Snatchers, and the darkly surreal podcast Welcome to Night Vale. Also, the Labrador police officer’s pretty cute and the virtual novel’s got an 18+ rating, just saying. 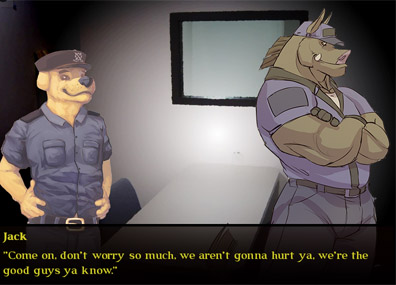 Blackgate begins with the setup, “It’s a dark night and you’re driving through the woods, when…” and the plot starts branching almost immediately. In the few minutes I spent clicking around, the game quickly took me to the town of Blackgate, a city of strange creatures, and a town where the officials seem to be covering up something of serious occult significance. It’s a claustrophobic story, but in horror escaping from the Bad Place is usually half the challenge. 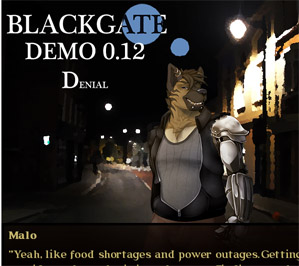 In a very surface skim, the soundtrack is pretty good, with lots of different moods that change with the scene. The artwork is of two types–small town photography with well-handled impressionistic painterly effects, and the various sprites that represent the characters, like above. As of this moment, the characters are static, but the Patreon milestone of “Animations!” is only $25 in pledges away. Here’s hoping. There are a few different artists handling the characters, and they’re consistently strong. Complaints? Not a lot of female characters to interact with, at least not yet. Depending on the dominant tone of the narrative (Small Town Horror, vs. Small Town Horror with Guys Taking It Off) this may not change or be a misread.

(No complaints, like I said, but most of the guys in this title have a “Heeeeeey, come here often?” expression on their faces, so I’m thinking it’s in part that kind of story, and thus the lack of a feminine presence.)

(Still no complaints, but some of these WIP updates suggest that we are dealing with that kind of story. NSFW BTW.)

Ultimately, Blackgate is the evolved version of the Choose Your Own Adventure series from the 70’s and 80s, but with illustration, soundtrack, furries, possibly animation, and way, way more forks in the road to choose from. The attention to detail on artwork is high, and the mood-building is strong. You can learn more about it on the creator Bane’s FA, which is largely Blackgate information. The Story So Far is up on Patreon as a free download, With Mac, Linux, and Android versions. Updates and new demos are released every two weeks.

Laika, if you don’t know the sad story, is one of the first animals in space, a stray dog launched by Russia into earth orbit in 1957 to test how living creatures endure the conditions of weightlessness and space (spoiler: Sometimes they run out of oxygen.) Notes from Laika’s story inform Laika Dosha heavily, so a little recap seemed in order.

Unlike most virtual novels, the “You” of Laika Dosha is not one voice. Instead, the player takes the part of a hive-mind, distributed across six individuals–a team from four species created to rescue survivors lost in space. When a creeping darkness infiltrates the solar system and humanity (what have they ever done for you?) has to evacuate their home planet (planetary fungal infestation, don’t ask, but if you’ve read about zombie ants, it’s…that thing.), the team has to act. Or rather, might choose to act, since ultimately it’s the reader’s choice. 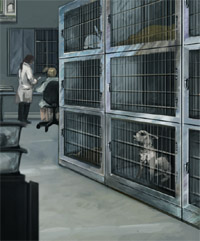 Without experiencing the novel, it seems like one of its themes is “Echoes of the past, haunting the distant future.” Laika herself has become something of either a saint of spacefarers or a dark god, a Charon of the spaceways (body bags are jettisoned into the endless night with dog biscuits…) Uplifted animals face the labs that created them. Survivors (?) of space wrecks ressurected  (??) by Padua Station’s medical technology. Can what is lost–innocence, bodies, past glories, a single stray dog–ever be recovered? 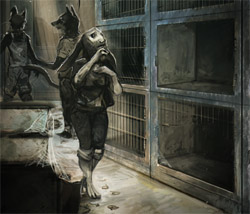 Figuratively and literally, Laika Dosha looks like a haunting product.

A few words about the creative team. From an executive perspective, all roads go back to HTBH and their very 21st Century fiction. The two main creative voices on the project: Patrick Rochefort of Rochefort Writes…Ah, THERE’S the fellow who initially tweeted me about this! I knew all this was interconnected…is the writer, and I love this quote about his influences:

“Fearlessly Bleak” is my new favorite adjectival phrase. If you like, you can stalk him on FA, where he’s active as “Bahumat,” and has a number of furry writing creds under his belt, particularly from FurPlanet and Sofawolf; “From Winter’s Ashes” is his web-published serial. The artist of the project is Oouna, whose art makes striking use of grays and blacks—you might wish to check out her Tumblr in particular.

Music is by Jon Fini. All roads in this post lead back to Bane, maybe he’ll correct me if Bane isn’t Fini’s cheetah alter-ego, but I suspect it is.

There’s several places you can learn more about Laika Dosha. Rochefort Writes is very active on this mini-forum, with lots of content updates and screenshots. Of course, the LD Home Page has a fair bit of information, including character bios, backstory about the game and its conflicts, merchandise (yes, coffee mugs. Yes, tee shirts. No to the Molly dakimakura.) And if you’re so inclined, you can get announcements on the official Laika Dosha FA.

Hmm. I’m tearing through the “Echo” project page on FurAffinity and I cannot, so-so research skillz notwithstanding, find information on the project creator, Howly. This is just a bit vexing, I spent character points on that skill. You can’t hide from me forever, Howly :) 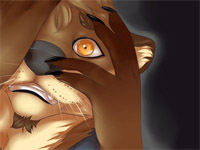 Echo is a “small town with buried secrets” romance/horror visual novel, which uses the small-town-as-sandbox-setting to explore a young otter’s return home. The protagonist, Chase, is working on a school project, and returns to find that his childhood and adolescent memories are rose-tinted, more idealized than the truth might actually be, and that there are some dark memories under the surface that are primed to dig their way upward. It’s is a story of a return home, of the muddled emotions of old, faded friendships simmering again, of a town that’s losing the battle against an inevitable demise. 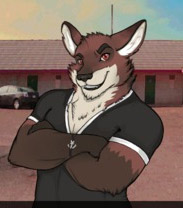 So…here’s my confession. I have absolutely no attention span, and found Echo a little bit challenging, didn’t make it through the prelude, after 10 minutes or so of clicking and skimming the sentences with only one pause to pick a direction, and that just the main character filling in a conversational lull. The characters’ dialog feels very natural, and the art is appealing, if a bit toony, not a bad thing, just a thing. But the sprites are rather static, at present; overall, at least in the prelude, the Echo reads more like a traditional novel with illustrations, rather than playing like a game. But it’s not fair to judge a game by the first few screens, and the comments on FA have been overwhelmingly positive.

The art of Echo is principally by Stardustpup, with music by KJNightwolf. The game’s first demo was released in mid-August, not a bad time to get in on ground level of the project.