A tabletop roleplaying game of cats and madness…

“In its flawless grace and superior self-sufficiency I have seen a symbol of the perfect beauty and bland impersonality of the universe itself, objectively considered, and in its air of silent mystery there resides for me all the wonder and fascination of the unknown. The dog appeals to cheap and facile emotions; the cat to the deepest founts of imagination and cosmic perception in the human mind.”  – “Cats and Dogs,” Howard Phillip Lovecraft

It’s not exactly a secret that H.P. Lovecraft really liked cats. In his strange story-poem, “Dream-Quest of Unknown Kadath,” cats save the protagonist, Randolph Carter, from the servants of chaos and evil. We have to assume Randolph had a can opener or something. 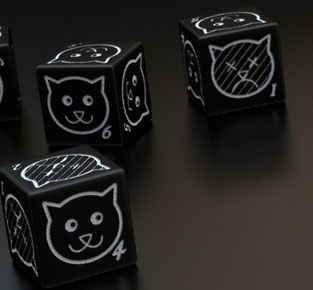 Now, a group of 3-5 players and a Cat Herder can continue the good fight in Call of Catthulu, and take on the furry minions of dark powers like Mutt’thra, Hastpurr, and even Great Catthulu, protecting the frankly somewhat stupid two-legged food providers from their dark influences. Of course, you can get the original rules now (and they’re on special!) but if you want the DELUXE version, you’ll have to wait a few months, since it’s on Kickstarter now.

COC is a rules-light tabletop RPG, good for newcomers to the hobby–unlike, say, D&D or furry favorite Ironclaw, there’s less than 2,000 pages of book to slog through, and characters are really a few short descriptive sentences. And, amazingly, they’re just cats. There’s the echo of the RPG “character class” tradition–catcrobats and scrappers, prophetic tiger dreamers, human-studying and remote-control-pressing twofootologists, charming pussyfoots. But they don’t throw fireballs or wield swords. As with its antecedent Bunnies and Burrows, these are simple animals against a harsh world.

It’s a little silly. Any game with the god “Snarlathotep” isn’t going to be entirely serious, but it shouldn’t be dismissed as a total ha-ha. The comic series Beasts of Burden shows how effective and frightening the “pets against darkness” trope can be (and it’s better for dog lovers).

The game really captured players’ imaginations at the big RPG Con Gencon. Part of this might be the game’s strengths of simple rules and easy-to-grasp concept, and may not play well long-term. But it’s bound to be a charming read, and the Kickstarter’s already past goal with a month to go.

One pledge level that’s TOTALLY worth a callout: the $50 “Pimp My Pet” level. This one gets you a cthulhu-compliant version of your dog or cat, tentacle-enabled. Who doesn’t need that in their lives?