Never Trust a Raccoon with a Wand: Wizards of the Wild

A game of enchantments and intrigues in the shadow of Stonehenge…

Wizards of the Wild 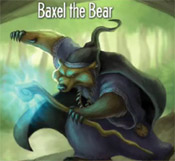 Imagine if you will…

The evening of the longest night. Each star is perfectly clear in the chill air, and the moon climbs inexorably toward its zenith in the sky. As the shadows of Stonehenge’s ancient monoliths shorten, the power in the air is palpable, magic surging through the ground, along the stones.

And a fox in a top hat is about to throw a swarm of fairy mice at you. Think fast. 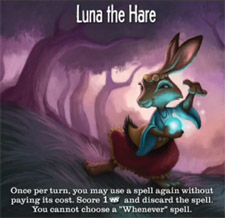 Wizards of the Wild is a new fist-of-dice/resource juggling game from Crosscut Games, In WOTW players take on role of one of eight wizardly beasts–a crazed raccoon shaman, vicious badger magician, suave cat, cunning fox, robed bear, each a powerful mage with a pawful of spells and strange resources at their command. Over the course of the game your tools wax and wane–this round, you’ll be rich in mana but poor in financial resources, next round you’ll have all the arcane lore but none of the power to back it up. Such is life, as a wizard. 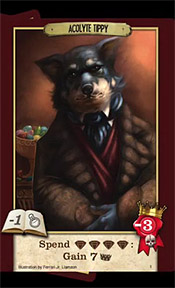 WOTW has elements of a resource-management game, but with a lot more randomness than your typical round of Settlers. Looking at the rules–available in PDF–there’s a bunch of randomizers here, so many that I’m not sure how strong a strategy you can build. There are seven rounds in a full game, and during each round you strive to get victory points that add up to your final victory. The tone of each round is governed by an acolyte card who can be bribed for victory points and throws various penalties around, and when you’re out of acolytes, the game, as they say, is up.

Each round you get a fistful of dice (and as many rerolls, so you can pick and choose) to represent your shifting fortunes–different types of magical energy, financial clout, arcane lore. Draw new cards from the spells and challenges decks, throw spells and effects around, or put your resources into storage for a rainy day. When all the players have finished their turns, see what penalties the round’s ally dishes out, then start the next turn. The game wraps up in a flurry of spell-casting, victory points are tallied, winners are applauded. 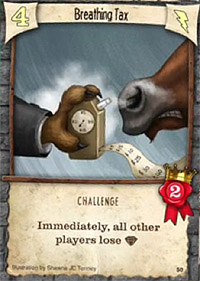 Without having played the game, there is a lot of random to it–much of the fun seems to be seeing what crazy combinations of cards can be spun out, which is a part of that kind of game. Your resources are randomly determined each round, the cards are their own randomizer, and the acolyte, too. WOTW looks like it doesn’t have a lot of agency, more of a game of reaching into the churn and seeing what happens next, with enough round-to-round planning to make the game, well, a game.

The artwork is really charismatic, a well-realized world of anthro critters and magical happenings. Fun stuff!

I’m not madly in love with the reward levels, they tend toward multipacks and luxurious deluxe materials. You can get your pet added the game as a card for the reasonable price of $200, but you can get the full game for about $25 without spending a bank-breaking amount on the super-complete set. Which is definitely not a bad thing! A game that’s totally in the “shopping cart” price is something to applaud, but on the other hand, there’s no material that’s only available to Kickstarter backers. Again, not a bad thing, but a noteworthy thing.

The Kickstarter page could benefit from a play-through video, but if there’s a lot of resource buildup from round to round (like the deceptively complex card game, “Three Dragon Ante,” which really makes sense only across several rounds), that may not give a clear image of the game.