All the world’s a kennel: Zipped and Pelted 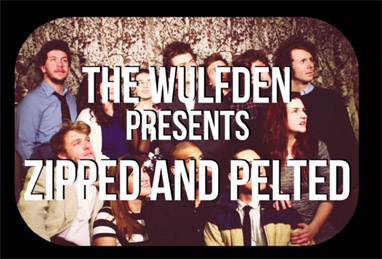 One thing that Indiegogo does so very well is operate on a local level—as a platform for community groups to raise funds and build awareness for events that might never be able to afford a full advertising spread in the local newspaper. Take the Wulfden Theatre Company.

The Wulfden Ensemble is, at present, and who knows what the future holds, a local drama group active in the Chicago area, with a focus on new artistic voices and found space—single-night short plays in a house or apartment, indie theatre spaces, Wulfden has mastered the art of intimate, zero-budget drama. With the furry-focused short play Zipped and Pelted (now on Indiegogo, on stage in September) Wulfden takes on a bigger stage in the Chicago Fringe Festival, with a play that in so many ways couldn’t have made it to paper, let alone the stage, some ten years ago—old questions of identity and humanity meet the modern furry fandom, the 21st century’s world of arbitrary terrorism, the high-energy space of social media. 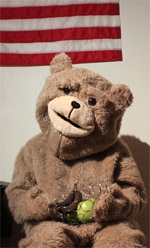 Z&P is an hourish-long play by Lucas Baisch, focusing on two new furries, Boomer (“Grizz”) and Mikey, going to their first furry con, Midwest Furfest 2014. In all probability, anyone who’d read this particular blog would remember the strange and horrible chlorine gas attack at MWF2014, and while Z&P isn’t the indie stage equivalent of a Michael Bay disaster film, it’s still informed by those events—a mess of panic and hard questions that the audience can see coming before the play even begins, as Grizz and Mikey make their plans, tweeting and internet chatting and blogging about their new furry identities, building their fursonas, planning their con and constructing their new fandom lives. The play takes place partly over social media, shown with shadows and projectors, partly at the space of the con itself. It’s a gently absurdist play, “two characters trying to find their fursonas in a world of tiki torches, fox wine, rubber ducks, through a chlorine cloud,” a mix of convention culture, high kitsch (apparently Baisch collaborated somehow with the creator of the lawn flamingo?).

I made up the snaketaurs, I hope.

The Wulfden Theater team was kind enough to share some words from playwrite Lucas Baisch, on the inspiration for his story:

“I started thinking about this play about a year and a half ago. The desire to write about the topic stemmed from a specific instance that May, when I was put in a position where I felt obligated to mercy kill a dying animal. I think what triggered it was this obsession with how humans can completely eradicate any semblance of empathy when interacting (or imposing violence) upon another animal. Maybe that violence is the root of the play. At the same time, I have for a while been thinking about writing a piece involving furries. I am fascinated by the way the community interacts with their own humanity, by layering on another animal identity.

While Baisch’s take on the fandom is playful and absurdist, he’s worked to keep it balanced—”not other-ing the community,” easy to do with a group of marginalized, but cheerful, weirdos. All the while, still telling a story with comic elements, and opening up some of the core ideas of the fandom to explore questions about the animal nature of humans.

If you want to learn more about Wulfden, you can poke around on their Facebook and see what they’re up to, or pop open Tumblr or Instagram for a deeper dive. You can chip in on the show itself on Indiegogo, or if you happen to be a Chicago resident, you can buy tickets to the upcoming show (you can of course buy tickets if you don’t plan to visit Chicago, but that seems a little rude somehow.)

Highlights for the week: The Pokémusical; Catmandu's 3-Storey Carpeted Cat Tree. Two projects from the "you won't be able to attend" file...unfortunately! With Burning Man coming up soon, the greater weirdo-artistic community has been revving up their engines and getting ready to hit the...