Indiegogo Launchpad’s direct sales to Amazon, and this week’s highlights…

Well, this is pretty darn awesome. A lot of our community’s product is kind of nebulous–digital art, commission work, and so on, so I’m having a hard time imagining how a furry crowdfunder might take advantage of this. Some of the more awesome card games, perhaps. It’s still pretty cool.

Amazon and Indiegogo have a new thing going: If you’ve got an Indiegogo product that’s fully funded and ready to ship, or going to ship soon, you can sell it through Amazon’s startup page, “Amazon Launchpad.” Launchpad is a curated page for exciting new startup projects, and it looks like it’s got categories for groceries, health and beauty, technology–so much technology–home, life, and toys. But the category that’s the most exciting–for me, at least–is “Funded on Indiegogo.”

You can learn more on Indiegogo’s blog or Amazon’s “Launchpad” info page. Looking at it, many of the products have a slick, “ready for Iphone” look to them. But if you’ve got a product that’s slick and clean and ready for prime time, this might be an exciting way to catapult your project from concept to success story.

In fairness, Launchpad isn’t just for Indiegogo, many of the projects there have a “Funded through Kickstarter” logo on them, but the sense of collaboration between Amazon and funding platform is, and one more way that Indiegogo is still the crowdfunding platform that is innovative and trying new concepts. Go, IGG. I hadn’t noticed this before, but they have another partnership with Vimeo to help support indie filmmakers, a group that really is Indiegogo’s original core demographic. Neat stuff.

Reviews this week: Absurdist furry Theatre from Wulfpak, two kids go to their first furcon and build their identities together (oh, spoiler, there’s a chlorine gas attack in there somewhere); Ponies take to the sky and storm the beaches in WWII-era pulp adventure RPG, “Roan.”

Adventures of Young Purrwalker (Ends: 9/10/2015)
A chibi/kitten space cat drama comic from Singapore, a tale of space, rivalries, and catnip poisoning.
On the fence? Download Issue 1 for free!

Fishy Business (Ends: 9/10/2015)
A low goal for sound effects for a CGI student film, a noir-looking story of a cat chasing a fish.
A little sad this one hasn’t made a single dime. It’s a personal project, but student art films are often pretty cool animations. 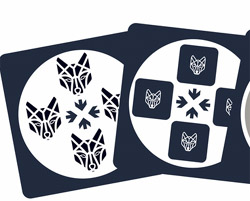 Wolfbite (Ends: 9/14/2015)
A minimalist matching card game in a “get rid of your cards” mode, but with lots of stylized wolf art.
Over goal! This is a pretty game, but I almost think the project page may be more fun than the game itself? It’s nicely stylized and has an easy concept, looks like a good game to fill a few minutes at a con.

Retronator Pixel Art Academy (Ends: 8/29/2015)
An adventure game AND pixel art tutorial and laboratory, in one product? Neat!
Way past goal, possibly because they were featured by Kickstarter. Cute project with some gentle tongue-in-cheek humor. 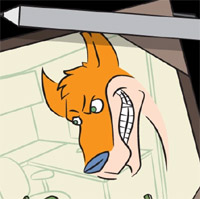 A Fox & A Squirrel (Ends: 9/26/2015): A mom’s bedtime story of a fox and a squirrel, brought to life in animation (I think?) Mostly I’m posting this one because the fox is kind of cute and butch. This is some of the worst wall-of-irrelevant-text I’ve seen in a project in a long time, but, cute fox. But then I went and posted the image at left. So…never mind?