Because sometimes we fail to keep it classy.

From “Cats Are Bad At…” on Kickstarter

I’m back and forth on this because I try my darndest to stay positive in this blog, so I’ll just say that there are a few projects out there that show that raw enthusiasm isn’t always going to make goal. I share them with you now. Personally, I think these are all fun projects. There’s a lot of stuff that I’d never even mention because it’s, well, boring.

These are not boring.

Dragons of Avery Isle (Kickstarter ending 2/14/15)
It’s good to have a goal. I’m not sure that $18K for a leatherette release of your first novel is the best one, but hey, dragons.

The art on this one draws me in. It’s very much in the old-school, huge eyes style, popularized by 1970s artist Margaret Keane. The dragons are much in the school of AD&D 2nd Edition’s Monster Manual (Do gold dragons smell of saffron, or does saffron smell of gold dragons? Where do we get saffron, anyway? Are gold dragons involved? What other spices can be derived from dragons? With enough exposition, will I be able to make curry?)

Strictly from a crowdfunding perspective, this one’s special. Three lines of marketing copy, an update that makes my tweets look wordy, and four screens of sample text cut and pasted from the prologue (“There are two Brass dragons, a male that they named Rolin and a female Treawin, which had dull, mottled brown scales at birth.  As time went by, the scales became brassier until they achieved a warm, burnished luster. They had supple, expressive lips.   These were very useful, talkative, fire breathing dragons.  They made their lair in the high rocky caves of the Island.”)

I like throwing Google the occasional curve ball, so I did a search for “Brass Dragon Lips” (like you do.) Here’s a useful entry from the Drakonika dragon index, itself mostly cribbed from old Dungeons and Dragons sourcebooks.

These are the most gregarious of all dragons, and are famous for their love of conversation. They crave sunlight and dry heat, so they frequent hot, arid regions, particularly sandy deserts. They like to make their lairs in high, rocky caves.

Brass dragons have dull, mottled brown scales at birth. As time goes on, the scales become more brassy until they reach a warm, burnished appearance. Brass dragons have supple, expressive lips. These are very useful, as they like to do lots of talking. They can breathe fire.

This may be the first self-published fantasy novel with an extensive bibliography to avoid copyright infringement. I am curious about what one might use brass dragons, or their lips, for, they are useful after all. I wonder if FurAffinity has any ideas. 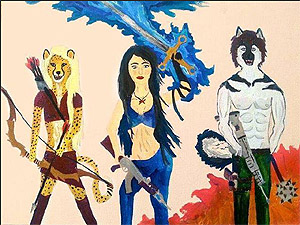 Drakdrek (Kickstarter ending 3/7/15)
Basic strategic marketing tip, don’t use “drek” in your project title. There are better syllables. Also, don’t do a Google image search for “drakdrek” at work, because the nearest match is “draadtrek,” which is apparently Afrikaans slang for certain special private-time games. But I digress.

There’s parts of the Drakdrek story that I can get behind, an artist/writer following her dream, a person who’s been writing since she was a teenager. That’s all cool, and we’re part of a maker fandom. Sharing your work is how you develop. That said, not everybody’s teen novel is the next “Eragon,” and not even Eragon was Eragon before three years of editing (time which Drakdrek’s creator has spent working on another six graphic novels.)

The Drakdrek kickstarter project page is very short on details, but you can learn a bit more about the universe on the author’s “about” page. I suspect there’s a little “lost in translation” here, I think the author is Hungarian. Drakdrek is a dimension higher than the there we live in, which is ruled by cosmic peacekeepers who recruit teenagers into a fighting academy as peaceful warriors preventing interdimensional war. At least that’s what I’ve gathered. At the end of the day, I’m only really sure of swordfighting warrior wolf women on demon-horses.

I don’t know…I feel bad about speaking negatively about someone’s art, because art is personal and v-e-r-y few people are born artists (my own writing at age 15? Pretty bad…). Beer is a lot more palatable after a month of brewing than it is when it goes into the keg. But when you turn your art into a financial ask, it feels a little different. Back in the Livejournal days I always found Furbid Horrors more fun and less of a guilty pleasure than Furaffinity Horrors. “Pay me for this” is a much higher standard than “I’m learning, here is where I am in the process.” 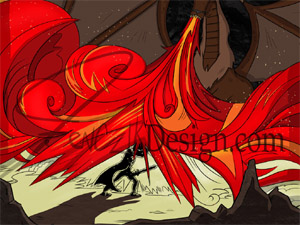 Wisdom of the Dragons: The Beginning (Kickstarter ending 2/4/15)
Actually, this one’s doing okay on Kickstarter, with 30 backers and $1000 in the bank. It’s a far cry from goal, but not a bad first time out. And the page is reasonably well-organized and presented.

WOTD:TB is a medieval fantasy, chock full of dragons. Well, dragon hybrids. There’s lion-dragons, wolf-dragons, zebra-dragons, owl-dragons (?) which just goes to show what the furry fandom has long known, dragons will hump anything that moves. Though this is a young adult novel, I don’t think it’s going to go there.

“The dragons had hoped to introduce themselves decades into the future to give this new civilization time to mature and develop their own balance and peace.”

“Men in armor had begun filling the square, their swords begun beating on their shields in fear and anger.”

Out of context, these don’t really tell a story, or give me a sense of the author’s flow of language. The others are chopped up with parentheticals to try to put them back into context that they don’t stand as writing samples anymore. Every time I see something made into verbal confetti like this I have more questions about what was left out than what’s been given to me.  The overall feeling I get is a disconnection from the great conversation that is young adult fantasy literature and its amazing, Potter-driven renaissance. Little things like these funny fragmentary writing samples. Big things like the project creator pointing to his LinkedIn account instead of a loving page of world-building and character bios (his background as an app developer just isn’t as relevant to the story that is his Kickstarter page as, say, the history of the wolf-dragon clan might be.)

I’m not being funny here, and I wanted to be, but this is an important note for all would-be kickstarters. Who you are as a creator is as important as the project is. Authors should show that they are madly, passionately in love with writing and their world, and that they’re a long way down the trail of madness that is writing and publishing. An author who can’t fall back on their craft to show who they are may not be ready for the circus stage that is fundraising and self-publishing.

Good job on that whole light-hearted post, Corbeau. Want to try again next week? Okay. Maybe we will.

Forest and Star Dragons (Ends: 2/9/2015)
Art featuring two powerful elemental dragons, nearly photo-realistic.
If you like these dragons, you might want to check out the artist’s card game and DA

The Lycanthrope Club II (Ends: 2/10/2015)
Illustrated novella of the adventures of a group of teenage werewolf girls. See Volume 1 at DaemonEye Publishing

Work for Biscuits (Ends: 2/26/2015)
Cute book series about service dogs for kids, by Laura Numeroff, author of If You Give a Mouse a Cookie

Globcow (Ends: 1/30/2015)
(Relaunch) An American manga comic about a little demon who escapes the underworld to earn his angel wings.

I Am The One ()
Stop-motion paper animation music video from New Zealand. Very compelling! There’s a cute anthro fox trumpet-player in there somewhere.

The Kingswood (Ends: 2/18/2015)
Family-friendly tabletop game about building roads and tricking your opponent (Kind of Carcassonne, but with anthro sloths and llamas)

Exploding Kittens (Ends: 2/19/2015)
A silly “Russian Roulette with Kittens” game with art by TheOatmeal
Wow. At $3 million after four days, this silly card game is the 10th most funded project on Kickstarter ever, with almost a month left on the clock.

Schrödinger’s Cats (Ends: 2/19/2015)
The OTHER silly card game about kittens and death. Or not death. I don’t know, it’s hazy.
Poor guys. I’m sure they didn’t mean to go against exploding kittens, it’s not their fault.

MajiMonsters (Ends: 2/23/2015)
A tabletop game based on the monster-trainer anime concept. Fun artwork, if a little rough. More on the MajiMonsters website.
Although nothing will beat “Cute & Fuzzy Cockfighting Seizure Monsters” for best title…

Ultimum (Ends: 3/21/2015)
A distant-future tabletop RPG of a far-evolved earth, with anthro races and lots of web-based tools and options.
This is a bit of a stretch, but the creator has been agressively reaching out toward furries, so that’s a thing. Unfortunately the Kickstarter focuses more on tech than story.

RetroBlazer (Ends: 2/22/2015)
A fast-paced sci-fi/Egypt themed FPS with a great visual scheme and lots of anthros.

Dragons of Avery Isle (Ends: 2/14/2015): It’s rare to find a person who is a talented author and artist, both. I don’t think we’re there yet. But the huge-eyed dragons are amusingly 70s. Kind of the Margaret Keane of dragons.
Drakdrek (Ends: 3/7/2015): The artwork is astonishingly, delightfully bad in this 6-volume fantasy series. ProTip for success: don’t use the word “drek” in your book title.

Lunakia’s Card Deck (Not yet launched): Artist Lunakia working on a new anthro card set, with a potential launch on Kickstarter down the road…