Gritty action and cheerfully smutty comedy: Feral vs. Peter Is the Wolf. Fight!! 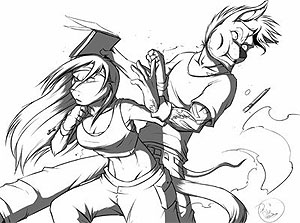 Two fun manga projects this week, on opposite ends of the comic spectrum. Feral is a fast-moving, action-packed story set against an underground fighting ring, a story of competition, skill, honor, and more than a little bloodshed. Peter Is the Wolf is a humorous, sexy, occasionally sticky romp, with lecherous monster hunters, awkward love triangles, and a remarkable ability to walk the line between “cute” and “NSFW.”

On the border of legality, somewhere between the dark streets of Alta and the city propped up by the its blood-stained cash flow, the FERAL fighting circuit–decades old, “underground” in that special, completely public, sense of the word–thrives. An industry unto itself, it brings in fighters and fans from across the world. Its champions are, above all, skilled, brutal, tough, but still honorable–the strong and quick survive, but only those who play by the circuit’s code thrive. 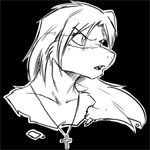 Enter Hayley Rosa–proud, competitive, and until Alta City, undefeated.  Her record was unbroken until she took on Dr. Brandt, current champion of the FERAL circuit. After her humiliating defeat she signed onto the underground fight circuit’s lists, a journey to beat Brandt at his own game–physically, she’s tough enough to take on FERAL, with a hard punch (believe me, I know), the pain tolerance of a monk, and enough grim determination to fuel a trilogy of Bruce Willis films, but FERAL isn’t just about fists and reflexes, and Hayley’s rage, her need to win at any cost, and her poisonous past may defeat her when the fight ring can’t.

Artist Dr. Dubz’s IGG campaign, Feral: The Next Fight is his second journey into Alta City. The first indie comic came out early this year, featuring Hayley’s entrance and crushing defeat. Dubz is polishing and expanding issue one, and getting ready to launch issue two, both through the indie manga publisher, Gashu Group. There are some good pledge points–a walk-on part at the $70 level, FERAL style commissions (“Be aware that FERAL law requires horns and claws to be blunted, and wings bound…”), and the unfortunately sold-out multi-page fight sequence. Pity about that one going!

I’m a little conflicted about one of the stretch goals, full color work by the artist Neko-Maya, who’s done some of the cover work for the series. She is, in fairness, the sort of awesome the series would do well to have, but Dubz’s B&W work is both ferocious and easy on the eyes–would coloring change that? Hard to say.

Peter Is the Wolf: Living In the Doghouse

On the other end of the spectrum, a story of love, laughs, and big, big breasts, Peter is The Wolf. PITW is the webcomic brainchild of writer/editor Kris Overstreet and artist Ben Rodriguez/Bar-1. It’s solidly in the American Manga tradition, reminiscent of Ninja High School and some of Phil Foglio‘s work. The art style is playful, well-developed after over six years (!) of comics.

So far as “plot” goes–and there is a plot, PITW isn’t just a cheesecake delivery platform–titular character Peter Stubbe isn’t anything special, though he is a werewolf, he’s a pretty middle-of-the-road model. This is par for the course in a comic with one toe in the “harem” anime genre, where the protagonist tends to be a little on the plain side. His  girlfriend Sarah is human–well, was human. Now she’s a newly transformed werewolf, barely under her own control (apparently lycanthropy is a sexually transmitted disease, who knew?)

After that, Peter’s world becomes a snarl of aggressive love interests, paranormal hunters, local supernaturals, and other craziness. You can read all about it on the new reader’s guide. There’s a few years of reading to catch up on!

Oh…the sex. Yes, there’s a fair amount of sex, and it’s sticky and over the top, and, surprise surprise, sells pretty well! Peter Is The Wolf is publisher White Lightning Productions‘ strongest webcomic, a combination of things that everyone knows–cute girls+cute guys=viable product–and what we already knew, werewolves are pretty hot. 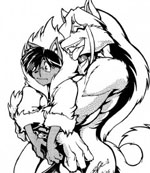 Which, oddly, is a part of the problem, and the reason for the Peter Is The Wolf IGG campaign. PITW is unusual for adult webcomics in that it’s got options–there’s a Rated R version too. It’s not hard to guess which one is the better seller at conventions, and this IGG is for the more worksafe edition–still a cool product, but with the smaller print runs, harder for the company to produce. There’s also been a rash of funding problems for similar publishers like Radio Comics and Antarctic Press, and White Lightning caught that flu, too–hard times for indie comic  producers.

The campaign’s got a great start, about 1/3 to goal. And there’s still a few of the higher level pledge points–walk-on roles, sketches, and just at this moment, one chance to be a manga werewolf in a comic scene. Of course, you could just buy the artist’s services for an entire weekend. Strictly your call.

Necronasses’s Piglet Necronomicon (Books/Print. Ends: 12/9/2013)
(Swedish) Winnie the Pooh’s “Piglet” and Abdul Alhazred, the Mad Arab and writer of the Necronomicon, combine with off-color internet humor in this weird, dread tome. (Yes, it’s in Swedish…but the art is perverse and cute, and piglets + mad cultists = awesome.)

Wee-Glow Collars (Clothing/Costumes. Ends: 11/15/2013)
Glow-in-the-dark collars for pets, raves (These use the standard green glow-plastic technology, I think the KS is seriously overstating its claims, but they’re nice-looking, and black goes with everything.)

Got Scat? (…Causes. Ends: 11/22/2013)
Poop-based studies of large, threatened carnivores for goverments and land owners. Plus, you can get a “Got Scat?” tote bag. Great for jazz fans.

Air Dash Online (…Just For Fun. Ends: 11/10/2013)
Smash Bros-inspired game in a dystopian future. For me, this is mostly about Togun the Tiger Warrior.