Night of the Lepus: The Shuttered City

In a distant, dystopian future now on Kickstarter, mankind has come full circle, where technological wonder has created the same dark shadows we sheltered from in our cro-magnon days. The human race has splintered into races, sub-races, slave-races. Most–certainly all that that can–live in the Empire of Man. The rest fall between the cracks, to backwaters like the dark and brooding city of Sylvanshire. This is the beginning of the dark world of Justin Sadur’s Shuttered City.

Our story revolves around Leland, a low-chimera, a rabbit-like member of a caste created as slaves or pets. In what of his story has been revealed (a large part of book 1 is on DeviantArt, and the older Shuttered City webcomic carries some of the same ideas, but seems to have evolved over the years–still, clues to the mystery), his life as a chimera puts him at the whim of the higher casts, a life easily discarded, a toy or even a lab animal–and there’s something deeply wrong with the inhabitants (people?) of Sylvanshire. 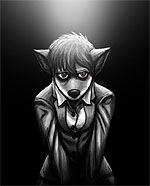 The influence of classic horror writer H.P. Lovecraft is unmistakable on the pages of Shuttered City–the gloomy outline of the port city of Sylvanshire and its warped inhabitants echo the city of Innsmouth in Lovecraft’s Massachusetts. But Lovecraft is nearly a school of literature on his own, with material to inform any number of dark fantasies. It’d be hard not to invoke old HPL in a story where the main characters feel hopeless in a vast, nearly infinite, world with secrets buried in every alley, grave, and probably flower pot.

Shuttered City is not without its flaws. The artist seems to be at his most natural and comfortable with the two main characters, and like many anthro artists comes across as uncomfortable with humans. At least in the earlier pages of the comic, anyway, Sadur’s art evolves over time. In a way, this works to the comic’s advantage, since it gives his humans an off-putting alien vibe. On the other hand, the book might have a hard time surviving outside the fandom. But when he works with the main characters, their expressions are vibrant, haunted, and alive.

(I’m not complaining, I like eye candy as much as the next dog, but does it seem like Leland spends half his time wearing just shorts or skivvies?)