Foxes of WWII: Imagination is the Only Escape

Imagination is the Only Escape

Fair warning, I know next to nothing about video games! So any fact errors on my part here are purely a result of lack of knowledge on my end. So on to an ignorant review of a thoughtful and controversial video game, Luc Bernard’s Imagination Is The Only Escape. 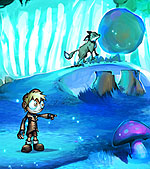 Indie game Braid, and its for-an-Indie crazy commercial success, opened a door for thoughtful, contemplative games. That there was a door there at all is a recent phenomenon, any sort of wide-scale distribution for non-corporate games stems from the XBox Live Marketplace, 2008. Imagination Is The Only Escape (IOE) has been quietly controversial and, sadly, a nonstarter just as long, waiting for years until there was a marketplace ready to tackle its subject matter: foxes. Wait, I meant a child’s look at the Holocaust.

IOE follows Samuel, a young Jewish child in France, during the occupation of that country by Nazi Germany. Samuel’s mother helps him escape from Paris, giving him the address of a priest who can help him, but she is killed as she helps him escape.

At some point, Samuel’s experience of the world deviates from a grim reality, as he retreats into his imagination to escape from the horror around him, so without the game in front of me, it’s hard to guess what’s real reality and what’s Samuel’s reality. The talking fox character, Renard, is probably in Samuel’s head, and where allegory and France meet and separate is anybody’s guess. Renard’s promise to Samuel is that if the boy can restore peace to the forest, the fox will bring his mother back to life. The game wanders between reality and fantasy, using the immersive nature of video games to give players the feeling of being in this real life horror story, of the experience of being a child (or any ordinary person) in World War II. Previous entries into this time period only gave the experience of shooting Nazis, so this “personal level” story is new.

Playwise, the designer suggests it’s something like The Walking Dead, experiential rather than any sort of traditional shooter. The very few images of the game suggest a side-to-side interactive puzzle, where Samuel and Renard work together to navigate the surreal world of Sam’s imagination. The art is cartoony, with the vibe of an independent comic. Samuel is wide-eyed, awkward, and messy. Renard is a believable little guy, very serious–“he looked vaguely pissed off. But then, foxes generally do.” (The Men Who Will Not Be Blamed For Nothing).

Designer Bernard carefully tries to keep IOE out of the “educational” gamespace, because educational games have a well-earned reputation for being dull and unplayably bad. It’s more about awareness and opening a conversation. Almost as important for Bernard is the idea of video games as a legitimate form of media, able to take on challenging topics and periods in a serious, thoughtful way. He’s a long way from his financial goal on Indiegogo, but maybe the time is right for this more long-term goal.

Over the Rainbow: A Sketchbook (Art. Ends: 10/23/2013)
A corgie-tastic sketchbook by Karen Krajenbrink.

Zoo Animal Art Project (Art. Ends: 12/1/2013)
Building a portfolio of detailed and warm animals, one illo and one zoo trip at a time. (So I’m normally against “fund my travel!” IGGs, but if Loryska is this talented at age 16, we owe it to the future of the fandom to give her all our money. Besides, it’s on Kickstarter.)

The Warden and the Wolf King (Books/Print. Ends: 10/30/2013)
Slightly “Jim Henson’s ‘Labyrinth'” YA fantasy novel, with toothy wolf people and anthro lizards. (Well into stretch goals at day 5. Apparently The Wingfeather Saga has quite a fan base!)

PokePinups (Clothing/Costumes. Ends: 10/20/2013)
PokeMon meets fandom pin-up girls in this tee line by Barefists. More on Tumblr. Or just go to his shop. (Storm and Pikachu’s cute, but I’m not sure my life’s complete without Poison Ivy on a Venusaur.)

End of the Road (Film/Animation/Theater. Ends: 11/9/2013)
A desperate bid to make a decent werewolf movie. Can such a thing be done?

EGOIST: Bright Clothes for Bright People (…Just For Fun. Ends: 11/1/2013)
Brilliant and luminous art tees with a Japanese vibe (nice tiger in there, if you can spot him, but it’s like finding Waldo with sharp claws.)

Enter the Moon (…Meh. Ends: 11/18/2013)
Another “oversharing instead of elevator pitch” werewolf novel. Why with the fluff intros? Nice cover though…

Beast’s Fury (…Coming Soon?. Not yet launched)
A second wave of crowdfunding for the Beast’s Fury fighting game?