This week’s illustration is from Tara Fly’s 2015 Literary Cats calendar, now on Kickstarter.

Okay, okay, okay. What would happen if Indiegogo decided to take on the sort of ongoing crowdfunding that Patreon does? But–wait for it–only for successful projects? It’s happened.

There was a time when I really liked Kickstarter and really hated Indiegogo. Kickstarter seemed professional–they weeded out the dumb joke projects like “Fund me finding my ass with both hands” (I don’t know that this was a project, but it’s not an exaggeration). They organized things in chronological order, not using some weird algorithmic sort.

Indiegogo, though, has surprised me–they’ve got some tricks. I’m going to have to write an extended paean of their features, but this new one could be a game-changer: projects that are successful may be able to sign onto Indiegogo’s ongoing funding platform.

The exciting thing about this for me is that it’s ongoing funding for projects that are proven success stories, which makes a heck of a lot of sense. Of course, this will encourage people with no business sense to create $5 campaigns. Maybe there’s a workaround.

How’d I find this? A recent project I covered last August—Mordrude’s Monsters, a handbook of realistic costume design–was invited to be a member of their pilot program.

I’m definitely going to do a long-form essay about this program–some thoughts about what it might mean, how it works, etc etc. Mordrude says she’ll give me some commentary on how the new program is working for her. For now, though, I look forward to seeing how this develops!

PS: Did you know that sometimes when you skip a week, 4,000 projects get posted? Seriously, there’s a lot of new stuff over the last two, sorry I procrastinated! 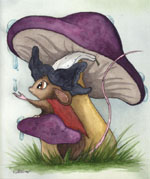 Popsicle Bailee and the Mysterious Stranger (Ends: 12/28/2014)
A children’s book about the mysterious world your dog imagines and why she barks incessantly.

Silver Ghosts: Day of the Dead pendants (Ends: 11/12/2014)
Silver animal totem pendants with a skeleton on the reverse

Paw Coins Collectable Coins (Ends: 11/24/2014)
Embossed and enamelled coin/medallions with a range of furry artwork
These are supposed to be collectible, but I’m not seeing it. Hoping the project gets retooled as just a jewelry line, it’d probably be more successful.

I hope Senpai Notices Me tee shirt designs (Ends: 12/1/2014)
Minimal-effort but that’s kind of the point. Your senpai will almost certainly notice you in this tee!
A bit meme-y, but good for a chuckle

Ravenous (Ends: 12/5/2014)
Graphic novel of hairy man vs. equally hairy werewolf. Kind of Wolverine, not at all Twilight.

La storia dell’Orso (Ends: 12/6/2014)
An Italian project and therefore a little over my head, but seems to be an artsy and surreal story of a rabbit and a bear, very sketchy and noir

Hearth’s Warming Eve (Ends: 11/12/2014)
If you happen to be in the San Diego area, you might be interested in this evening of Pony/Holiday themed music and festivities.

Horse Boy! The making of. (Ends: 11/30/2014)
11111, if you’re unfamiliar, is a challenging play/film about a young man obsessed with horses to a dangerous, even religious, degree, dark, disturbing, with sexual overtones. Obviously, it was crying to be made into a comedy mockumentary musical.
Do watch the video for this. It’s absurd.

Chimera Genesis (Ends: 11/20/2014)
Side-scrolling procedural platformer where you mix-and-match species to sprint past challenges
Here’s the demo, but it’s kind of murky and unappealing–I hope the game evolves a bit 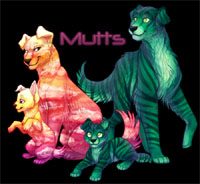 The Incredible Untold Story of Sailor Moon (Ends: 11/21/2014): The definitive book about Sailor Moon’s journey to America, by a consultant for DIC Entertainment.
Animals in Delicious Food (Ends: 11/29/2014): This is the stupidest project ever, but… fox in a plate of curry.
GOTY: Gaming Awards, Radio, Database (Ends: 12/15/2014): A multimedia project aimed at being the Oscar awards for video games. Very slow start and far from goal, but an interesting idea.