This week’s illustration is from the Isidore Tarot, now on Indiegogo. 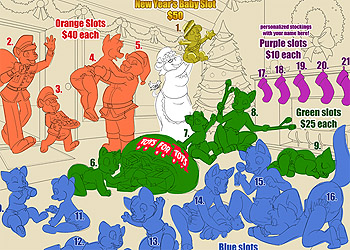 I’m a little late on this one, but it was a one-week project, and I really only check Indiegogo once a week. But it’s a neat example of using Indiegogo as a commission-organizing engine, which is pretty cool.

The project in question is Tato‘s “Toys for Tots” project. Tato’s a babyfur artist, and if an intensely sappy “Christmas at the Orphanage” style picture isn’t a place for babyfur art to shine, it’s an unjust universe.

I’ve put the base YCH at left, but here’s a link to the larger original. Like a lot of YCH images it’s busy edging into claustrophobic–in this case though it’s for a good cause and the multiplicity of bodies is a Good Thing–it’s all a fundraiser for Toys for Tots, with all proceeds going to that charity.

But let’s look at the trees and not the forest, that is after all the point of this blog. As a tool for managing a YCH project, this seemed to work well–all the character slots were claimed within five days. Awesome, and $500 or so going to a worthy cause! And Tato even used Indiegogo’s “Verified Nonprofit” process so that fees are reduced and the donations are, well, donations, so you can write off your empampered foxling.

On the downside, while she DID meet her goal (and thus reduced fees from 12% to 9%, or I guess 6.5% with the nonprofit discount), there are a few more slots available for “your name on a stocking.” The lesson seems to be that you can’t really take the “C” out of YCH, even as a charity fundraiser–there’s still a few days left though, so claim one of those stockings and prove me wrong. It’s for a good cause.

I’m curious to know why Tato went with Indiegogo instead of the possibly more lucrative YCH Bidding War that seems to be the standard model for this sort of thing. There are a LOT of characters, and IGG’s probably easier to wrangle the dollars for. On the other paw, this model seems to take away from a lot of the “oh, I want to be the one sleeping by the fire!” that’s a part and parcel of YCH-land. Though maybe that’s a good thing and saves her a few headaches.

Anyway, only three more days to fill up those stockings! Good luck, Tato!

Toys for Tots (Ends: 12/15/2014)
Charitable YCH type image from Babyfur artist Tato, Santa bringing gifts to the kids.
This is a use of Indiegogo that I haven’t seen before, managing a YCH auction. Hmm. Also, all commission slots taken, it’s still interesting.

Globcow (Ends: 12/31/2014)
Comic about a little demon earning his angel wings, and a pig in a trenchcoat (?)
Brightly-colored, loosely pokemon-inspired manga.

Mr. Sparklzz (Ends: 1/10/2015)
Web series: Three dysfunctional siblings, a witch, and a sassy cat. Live action. It’s a guy with a cat nose.
I actually do like this, it’s cute. Very “indie theater.”

Panda Oki Animated Pilot (Ends: 2/8/2015)
Frenetic little manga pandas in an Invader Zim style by Anthony Jappa
Unfortunately this seems to be one of those ‘try to fund-raise without outreach by leaving the campaign up as long as possible’ pages. Oh, and flexible funding. Sigh.

Atakapu (Ends: 1/26/2015)
Speedrun platformer with a furry, three-eyed alien and his wide variety of power-up costumes. The blue wolf of doom is extremely that thing.

This is your basic obscene super-cartoony, Ren-and-Stimpy esque smut. But it’s in Hungarian, which adds an element of mystery.

Teach Kids how to Save Energy (Ends: 1/18/2015): Spectacularly bad mascot suit. Worst squirrel ever. Wow. It’s coming after me with a golf club.