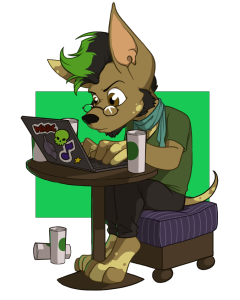 (Unreasonably cute picture of Corbeau by Lizbeth, on FA and on Patreon!)

I stumbled across Vanguard, a furry tabletop RPG with a strong sci-fi setting and pretty solid artwork, it’s not amazing but for RPG material, it’s strong. This one’s next on my to-do list, it looks really pretty (and I pretty much write up every furry tabletop RPG, TRPGs are my other fandom.) I found that one on FurAffinity, missed it completely on kickstarter. It has Space Badgers.

Next on my to-do list, “Wizards of the Wild,” a charming–heh–card game featuring anthro wizards battling it out. And a magic badger. There are so many things I want to dump money on this week. Money would be helpful right now. Maybe the overtime fairies will sprinkle me with their horrible dust again.

three items that I really want to cover but may not get around to, just because they’re a little off topic or small focus: Goldenwolf’s werewolf romance novel, “Hunger,” and the stupidly cute children’s book, “The Grumpy Unicorn,” which has a round little unicorn who leaves a trail of dejected rainbow wherever he goes, and really wants to be a griffon. Since it’s a kid’s book he probably learns a valuable lesson, but being a griffon is kind of a noble thing, too, isn’t it? Anyway, the cute factor on this one is sky-high. And a part of me–the part that values variety more than common sense–wants to do a short and loving write up of The Party Animals, and their absurd, face-painted kiddie romp. I think my readership is a little too post-ironic to appreciate them, since their target audience is ages 2-6, but they are clearly romping in fuzzy animal tails, and that makes them cousins!

My mate came into my room, looked at “The Party Animals,” snorted, and left. I don’t care. I think they’re cute.

So…if I don’t give these wonderful projects the write-ups they’re due, I just want to say, they really were wonderful.

Thank you to my friends who donated toward’s Folf’s lung transplant surgery! I’ve got a few poems to work on too :)

A Dream of Dragons (Ends: 4/6/2015)
An illustration series of elementally themed chinese dragons
This is just a BIT “van art” to my eye, but it did make goal! 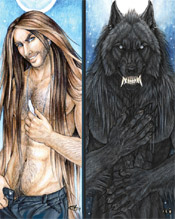 Het Nieuwsgierige Vosje (Ends: 3/28/2015)
The crazy cheerful story of The Curious Fox, which I believe is primarily Swedish. But supercute.

The Party Animals (Ends: 4/4/2015)
A kid’s music series with highly excitable people in fuzzy animal facepaint and froofy ears
This has cute make-up, but I am too old for this kind of forced jollility :)

An Odd Animal Alphabet (Ends: 4/7/2015)
Sweetly detailed illustrations of corner-case animals in the alphabet.
H had better be for hyena or I’m writing my congressman.

The Grumpy Unicorn (Ends: 4/10/2015)
A completely cute and super-surly unicorn trying to make his way and find his joy in a world of scary mythologicals
I JUST WANT TO PINCH HIS CHEEKS

SpaceRamblers (Ends: 4/9/2015)
A sci-fi webcomic with a hefty slice of Space Opera. And pandas. Lots of pandas this week.

Squirrel: Comedy Short (Ends: 4/3/2015)
Comedy short: After a cop pepper-sprayed a baby squirrel (true story), a local mom becomes a little bit obsessed with righting this wrong.
Be warned, there are rubber squirrel masks behind this link.

Midnight Mares (Ends: 4/5/2015)
A pony-inspired (but not explicitly MLP) story of ponies and the realms of dream and nightmare, night and day.

Squirrel Ascendancy (Ends: 4/5/2015)
A little set-building card game about squirrels going to war.
No chance of this meeting goal, but if you like squirrels the art’s fun

A dice-and-cards game of magical animals in wizardly combat.
Oh mi gosh, the art in this! Every wizard is a different furry character with a different visual style. Wow.

Pandante: Light and Dark (Ends: 4/11/2015)
A gambling and bluff game like Texas Hold’Em Poker, but with pandas, and snacks.