This week’s illustration is from A Peacock Among Pigeons, on Kickstarter

After a week filled with some really amazing projects, this week seems a little more chill. So I’m going to take five minutes out to look at a project which isn’t remarkable–or even necessarily likely to succeed–but I do like the way they’re handling things.

The project is “Intoxicated Unicorn.” Specifically, it’s a sticker project, a pretty typical mini-project with a low goal, $500. This is textbook “itty bitty mini-project.” We don’t know a lot about it yet, only that there’s a couple of sloshed unicorns.

Art is by old-guard furry artist, Vicky Wyman. She was the Guest of Honor at Conference 2, back in 1991, before the Internet. Attendance: 200. At the time–and possibly now–her best-known work was the unicorn-intensive fantasy comic, “Xanadu,” which ran back in 1988, maybe three or four years after furries were even a thing, and a year before the first furry con. None of this is really what I want to talk about, except to say that the primary artist has a bit of star power, at least within our fandom.

No, what I want to talk about is that this silly little sticker is not, actually, the project–it’s a soft-launch of a future project, testing the waters for an upcoming game, the Intoxicated Unicorns “Undrinking Game.”

Reading up on Kickstarter best practices, this makes a lot of sense. Start small. Make stickers, make another damned “minimalist wallet.” It’s not really about the project, or the money. It’s about building 1) trust and 2) an audience. Even if this project crashes, the creative team behind the stickers will have that many supporters on tap to launch their next project. It does look like the project is going to fail, I’m guessing it’s mostly because Wyman hasn’t talked it up on her FA account or other furry social media, and the actual project coordinators may or may not have any fandom presence. So, there’s that. But it’s still a good way of building up to a more challenging project.

Intoxicated Unicorn Stickers (Ends: 4/16/2015)
A mini-project before launching the Intoxicated Unicorns party game, with artwork by Vicky Wyman, co-creator of 80s furry comic “Xanadu”
This is a really good idea, though not working so well–a small, easier project related to the main one to build audience and email list. +1, Intoxicated Unicorn team!

Andrew Loehr’s Cartoons (Ends: 4/19/2015)
A crowdfund/commish project ofsimple and cartoony custom anthro work.
This is one of those “use crowdfunding for commissions” projects, which I don’t normally look too much at, but solid work!

A Peacock Among Pigeons (Ends: 4/24/2015)
An LGBT book about celebrating differences and standing out. Mostly for kids but not quite.
It’s sort of “A Child’s First Book of FABULOUS” 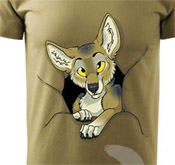 Wuffle in France (Ends: 5/21/2015)
A French translation of Wuffle the Friendly Wolf

Valitsen Sinut (I Choose You!) (Ends: 4/18/2015)
A Finnish indie musical based on Pokemon to celebrate the world’s 20th anniversary

Thinking Like a Savannah (Ends: 4/27/2015)
Not furry, but a predator-focused nature documentary spotlighting the importance of cheetahs and leopards in creating an ecosystem.

Tango: The Movie (Ends: 4/28/2015)
Two mascots fight for the job of sign flipper outside a seedy used car store. Short film.
Something about this–a mascot finding the perfect niche for himself–seemed important. May be tongue-in-cheek.

The Pigman (Ends: 5/8/2015)
Irish indie short film about the life of a man/pig in a small village community.

World Gates (Ends: 4/26/2015)
Complex-looking card game based on World Gates webcomic, sci-fi fantasy, a little bit Sonic, to my eyes.
Looks like a nonstarter. Rules, and art in card-size, both kind of unapproachable.

Soft Paws AB/DL Adult Diaper (Ends: 4/26/2015)
Adult diapers with a toddler fur and pastel paw print design for the babyfur community.
High goal of $35K and a very small niche, this one’s off to a slow start.