Illustration from The Evolution Card Game on Kickstarter 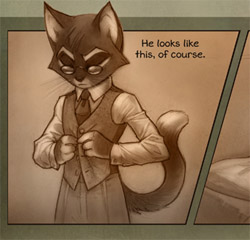 A bit slow in crowdfundingland, so I’m going to take a quiet moment out and look at a couple of cute tee shirt companies currently funding. But it’s worth pointing out one little, or large, achievement. If you’re a fan of the adorable steampunky webcomic “Lackadaisy,” you’re probably aware of this one already.

It’s hard to find enough words to praise this comic. The art is detailed, with the attention to detail of any of the great realistic artists of the fandom and the character and warmth of…of…well, like I said, words fail me.

So it’s newsworthy that Lackadaisy’s artist, Tracy Butler, has managed to quit her job, gather her fanbase together, and take the plunge into full-time, crowdfunded cartooning. A scary step, but it seems to have worked for her–through Patreon, she’s actually looking at a living wage, and without a lot of complicated perks. Congratulations, Tracy!

Now, on to the tees. 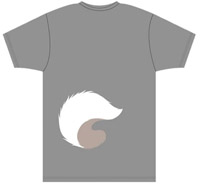 I seem to be a little bit late to the party for Wild @ Heart’s tee line, now on Kickstarter. I missed the original project post back in March, and now there’s only a week left on the project. Oops!

The concept, and the tees, are pretty simple, but well-executed–it’s a tail tee. The first two designs to be unfurled are the fox and husky, to be released for the next Anthrocon. Also in the line-up is a super-cute dragon with wikkle wings, a tiger, and—well, I don’t know what that is. It looks like a strawberry bunny, I’m at a loss.

If you happen to miss this cute Kickstarter, you can check out Studio Cute’s webpage, follow Ponygirl on FA, and the tees are likely to make it to her Etsy page as well (along with some cute wolf-themed jewelry…), so even if it’s too late to pony up some cash, you can still get some tail there.

Apologies for that last one. It’s really been a heck of a week.

Over on Indiegogo, you still have a month to check out Animaltshirts.eu–though there’s a lot to be said for just cruising over to their website. To save you some valuable clicking time, here’s the species page for canine designs.

Points for having a lot of obscure animals–Tasmanian devils, hyenas, bats, Sergals (!), dragons all make the cut–as well as a heaping helping of fox subspecies, some tribal style art–lots of variety in this company!

Most of the art is by RaikaDeLaNoche (or if you’re not at work, you could check her after-dark alterego, AlmaAurora), whose style runs an impressive stylistic range from pieces reminiscent of Blotch, Goldenwolf, and Michele Light. Nice stuff!

Ultimately, this is a capital campaign, intended to get a textile printer and replace some of the services their previous provider cut. The prices in the Indiegogo page are a little higher than in the shop–it’s a fundraiser more than a deal of the century. So think a bit about how you want your money to flow.

Tea Critters 2016 Calendar (Ends: 5/2/2015)
Illustrated calendar by NightLineZ with delicately colored animals from the Chinese zodiac, in watercolor and tea.

Batbear (Ends: 5/8/2015)
In a city ruled by darkness, one bear is brave enough to don the MASK OF JUSTICE. Batbear.
Although I did like the original title, Deadpooh.

Dream Town Amusement Park (Ends: 5/10/2015)
The happiest place on earth goes to hell and the animal mascots start attacking. Art by Defected Angel.
For a Five Nights at Freddy’s rip-off, this graphic novel has much better art than it needed to.

Slow and Steady (Ends: 5/6/2015)
CGI adaptation of the Tortoise and the Hare. The Uncanny Valley on this one is quite high. 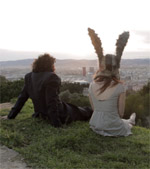 Lapin, Une Etrange Historie d’Amour (Ends: 5/7/2015)
A surreal french film about a man, a rabbit-like girl, a strange world under an apartment. A bit Gaimanesque. A bit French.

Burrows and Badgers (Ends: 4/22/2015)
Animal tabletop mini figures with a Redwall aesthetic, but a little dark-and-grimmer than you might expect.

Epyllion, Dragon Epic RPG (Ends: 5/3/2015)
Tabletop RPG of noble dragon houses and their scions rebelling against tradition.
Interestingly, the team lists MLP: Friendship is Magic as an influence, huh. This is actually past goal pretty early in, which is kind of a surprise–also they may have lowballed the goal.

The Evolution Game System (Ends: 5/24/2015)
A colorful card game of evolution, predator and prey, and terrible fights around the watering hole. Also, lots of striped hyenas.
Past goal!

Embroidered Equines (Ends: 5/3/2015)
Plush ponies from SparkCostumes, and a maker looking to move to embroidery from the stitched applique model.

Ninja Chronicle (Ends: 5/3/2015)
A collect-a-thon adventure featuring a skyship and a nimble cat and fox.
Slow start. I think this might suffer from first-project-itis and a realistic goal.

DragonHarpGaming mascot suit (Ends: 6/7/2015): I’m broadly against “fund my fursuit” pages, but this is for a cause of a sort, a charity/gaming group and it’s a cute character, a dragon with video game controller markngs, so hey.

The Art of Character Design (Ends: 5/9/2015): Vol.2 of a book of game, film, and toy character design. CGI, puppets, stop-motion. Fun coffee-table tour of the subject.