This week’s illustration is from the indiegogo campaign for Goldenwolf’s new sketch book!

I wish I could talk more about this, as I get more pieces together I’ll have an official announcement probably a week or two from now, but I’m working with a few artists on a new Kickstarter launching in July. More as I can say more :) In the meantime, here’s your regularly-scheduled messages from furrycrowdfundingland…

Reviews this weekcycle: A not-terribly-impressed review of noir/supers graphic novel, “Lars, Lunchbox, and The Quasmo D.” It’s good to accompany your “what not to do” lesson with good pictures. 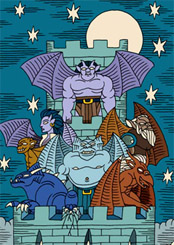 Goldenwolf’s Sketchbook V1 (Ends: 6/4/2014)
60 pages of illustrations by the amazing Were artist, Goldenwolf

Lars, Lunchbox and the Quasmo D (Ends: 6/6/2014)
Graphic Novel: a Cold War story set in Washington DC in a story of intrigue, commies, caped villains, bubblegum pop, and humanoid dogs.
My only reservation here is that the writer doesn’t really know when to shush. Exposition, anyone? Hope the GN isn’t this texty…

Butter Comics (Ends: 6/8/2014)
Brightly colored–almost trippy–comics about bird people and dog people by MegMcIntire
Why does Portland have so many good comic artists?

Tentatrio Plus Pals (Ends: 6/5/2014)
Cuddly, colorful stuffed octopus.
You know you want to.

The Hollywood Sci Fi Museum (Ends: 6/16/2014): An exciting nonprofit project with props, sets, costumes, ships, and a whole lot of et cetera from the world of film scifi!